If you were a restaurant investor, what would you expect a chef to say to you after you've discussed a new concept, toured the space and offered him the opportunity to take the reigns in the kitchen? Likely not a stern "no," swiftly followed by his handing over a prepared alternate restaurant plan. That's the route chef Mandel Hitzer took back in late 2011 and, I'll be damned, it worked.

"I [pretty much] said 'no' to their offer and handed them this folder with my concept and menu," the Winnipeg chef proudly exclaims. "They looked at it, looked up at me and I just said it: ‘We’re going to open up deer + almond.’”

Fast foward to April, 2012 and on the corner of Princess Street and McDermot Avenue in Winnipeg's Exchange District, the restaurant came to life.

Stepping inside deer + almond, you'll find metal-framed chairs nestled up to light wood grain tabletops and a large wooden banquet running along the back of the room with a series of colourful art pieces adorning the walls. Littered around the window sills and bar area are deer antlers, beer steins and other paraphernalia. It seems a little mishmash at first, but if you dig a little deeper, you'll find that it's all a subtle nod to the restaurant's name.

“My name in German means ‘almond’ and the ‘deer’ part of it kind of comes from memories of going out to the family cabin. I spent a lot of summers out there with my grandparents and I remember white tail deer out in the fields in Manitoba. It has just always kind of stuck in my mind,” explains Hitzer.

Much to my relief, the chef doesn't like to get too literal in his inspiration by the name when it comes to his menu, as you won't commonly see vension, or the loveable nut up for ordering.

Hitzer laughs, "Yeah, I don’t cook a ton of [deer] because I don’t really feel like I need to, since it’s part of the name! Same with almonds. I like switching things up quite a bit, anyway."

It's clear that Hitzer has a try-anything-once kind of mentality (or in chef speak: Why the fuck not?), which allows him to think out of the box. The chef pulls inspiration from everywhere, more specifically, flavours from Mediterranean and Asian cuisines, leaving his food a tad all over the map, but in a good way. I'd probably have to go with "global small plates" if we're looking to categorize to this establishment.

The experimentation of chef and owner Mandel Hitzer definitely yields some interesting offerings here. Though not always resulting in perfection, the chef's creativity is captivating, nonetheless. A love-it-or-hate-it vegan dish (his own words) of tahini, roasted eggplant and smoked tomato is surprisingly filling and refreshingly unique. Then there's the kale and kelp beignets with hemp aioli that, to be honest, sounds like something only a hippie would eat, but they were salty and addictive, with a mysterious umami kind of flavour that kept me thinking about them for quite some time after.

Next up is a creative take on tuna tartar served atop a kalamata olive "tzatziki", finished with pomegranate seeds — again, an interesting combination of flavours. Both the tuna and the olive mixture were delicious when tasted separately, but a bit lost when scooped up altogether in one bite.

While I ate, I asked Hitzer if he had ever had any dishes take a nose dive on the menu. Like anything in life, it's common for you to love something while another person thinks the opposite.

"We have put things on the menu where I’ve thought, ‘Wow, this is the best thing ever!’ but it always goes back to what people like. There was this beautiful scrambled eggs sort of dish with pickled turnip that I had on the menu last fall: it was my favourite thing to eat, but no one ordered it. It is definitely sad to see things like that come and go, but it is what it is!" He laments, laughing.

While ever-popular ingredients these days like offal can lead to awfully (pun intended; I'm clever like that) unappealing plate presentation, Hitzer's dishes all seem to pop from the plate. Whether it's a dish of tender pork belly and leeks on top of flaky pastry, studded with a smooth yam purée (pictured above), or an order of the chef's take on mushrooms on toast: crisp toast layered with buttery mushrooms, greens and eggs topped with finely shaved gruyere; my dinner was as appealing to the eye as it was to my palate. After all, we do eat with our eyes first.

Sitting at the bar for dinner, the bartender was extremely on the ball. She was shaking and stirring drinks with a refined ease that could easily be compared to what I'd find in more-established scenes like Toronto and Vancouver. Winnipeg's cocktail community is a small one, but it's gaining momentum, slowly, but surely. Almond's bar arsenal includes fresh-made juices, bitters and a good selection of liquors, making them well-posed for cocktail nobility in the city as the trend rises over the coming months.

So, now that the restaurant is reaching its two year anniversary, drawing diners' honeymoon phase to a close, how does Hitzer and deer + almond hope to stay on everyone's radars?

"The whole word of mouth thing, that’s how we started up the restaurant in the first place, just quietly opening up. I mean, I don’t even have a website," he happily points out. "It’s kind of ballsy, but at the same time, I really think that word of mouth is king. If people are talking about me, that’s all that matters, and I have to get people to continue to talk about me by pushing the boundaries of Winnipeg.” 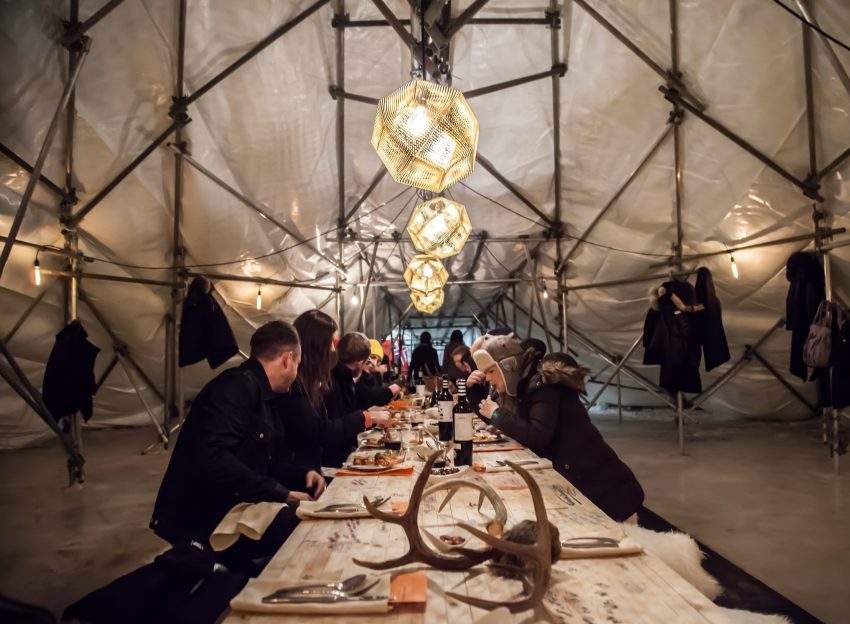 For all of us snow-loving Canadians, dining on the middle of a frozen river is equal parts intriguing and bizarre. Mandel conceptualized this chilly pop-up idea with Winnipeg architect/designer Joe Kalturnyk in 2012 and eventually brought it to life on January 26, 2013, on solid ice at The Forks, where the Red and Assiniboine rivers meet just outside of the city's downtown area.

"The Forks is an actually sacred place," explains Hitzer. "It’s been a meeting place for voyagers, aboriginals for hundreds — if not thousands — of years. So, it is great to be able to come back to that place and share food with each other."

He continues, “I don’t know if you’ve ever heard of Louis Riel, but he’s a hero! Last year, someone at the pop-up shouted out, ‘If Louis Riel was alive, he’d be sitting on this river eating right now!' He totally would have been.”

Constructed out of building scaffolding and large flame retardant tarps, the temporary structure is described by Hitzer as somewhat similar to a teepee.

"It almost looked like the biggest fucking snow fort you’ve ever seen," laughs the chef as he describes the exterior. "When you drove up to it at night, it just blended into the landscape. It was crazy."

If that's not crazy enough, the team of local chefs, including Segovia's Adam Donnelly, managed to pull off three seatings per evening, for an entire week in below -20 C temperature. This year, Hitzer has assembled 11 local chefs, as well as a talented out-of-towner, Jason Barton-Browne of Calgary's renowned Teatro restaurant for the collaboration. Each chef will get a turn heading the RAW kitchen, reworking the menu in their individual styles. To keep things exciting, all of the lucky attendees will have no idea what exactly they are having for dinner until they pull up a chair at the long, communal table.

RAW: Almond has also upped the ante this year, expanded from 20 seats to 30 and a separate "tasting lounge" that will fit ten people.

Hitzer finishes by saying, “It really is a great way of building the culinary community here and challenging Winnipegers to try something different.”

Well, zip up that jacket and grab your toque because we're eating on ice this winter, baby!

Update: It has just been announced that one of Canada's most celebrated chefs, Vancouver's Vikram Vij, will be participating in the event this year.

One Day in Winnipeg: Wall of Chefs judge Mandel Hitzer

Edmonton's Rostizado to close permanently at the end of January