This week, Empire Ltd.–Canada’s second largest grocery retailer–and the Food, Health and Consumer Products of Canada (FHCP) came to an agreement on a first-of-its-kind proposal that aims to establish an equitable balance between retailers and suppliers through transparency, predictability, and fairness.

The iniquitous and often volatile relationship between Canadian retailers and suppliers has long been scrutinized throughout various levels of the supply chain. However, when the pandemic arrived in Canada and the food supply chain was threatened, suppliers and retailers were able to collaborate and come to terms in order to ensure its preservation.

The new proposal directly addresses longstanding concerns regarding arbitrary fees, late payments, and sudden cost increases. Although these matters had seemingly improved during the pandemic, only a few months ago Loblaw Companies Ltd. and Walmart Canada imposed higher fees on suppliers, which according to those in favour of the new proposal, is a significant step backwards.

According to Empire Ltd. and FHCP, the proposed code will still allow for negotiations and competition, while providing more stability and certainty to the industry, which will in turn create more opportunities for investment in Canadian manufacturing and innovation.

Empire Ltd. and and FHCP are currently encouraging other grocers, suppliers, and industry stakeholders to join in support and provide feedback to ensure that all levels of the supply chain are involved as the dialogue moves forward.

More information regarding the Proposed Grocery Supply Code of Practice for Canada can be found online. 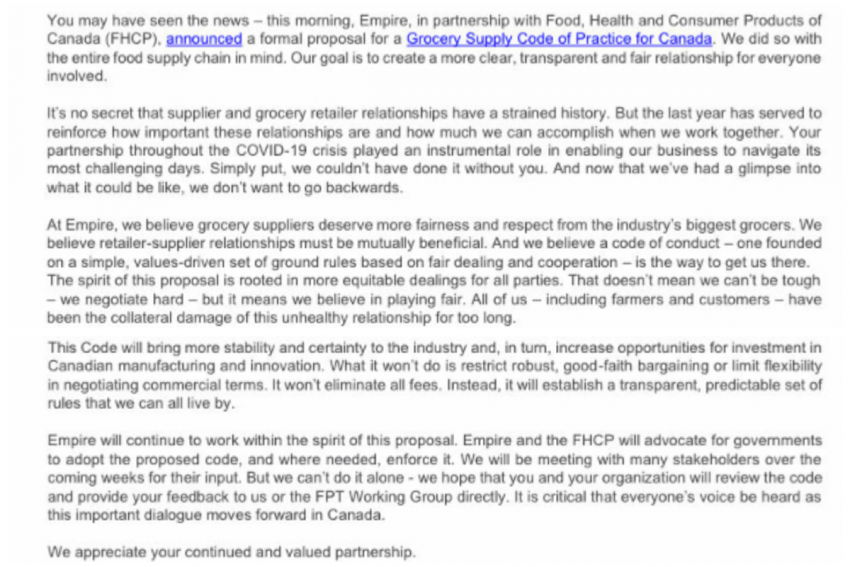 ICYMI: Stronger Together raises over $8 million, the downside of delivery, and more