The humble risotto; often the only option for vegetarians in restaurants. However, just because risotto may be one of the most commonly-ordered items, it doesn’t need to lack in creativity or flair.

Award-winning Vancouver eatery The Acorn Restaurant seldomly features the classic comfort dish, but when they do it is almost always a hit. This cauliflower risotto from The Acorn Cookbook utilizes both the vegetable and mushroom varietals to create a delightfully crispy and satisfying result. 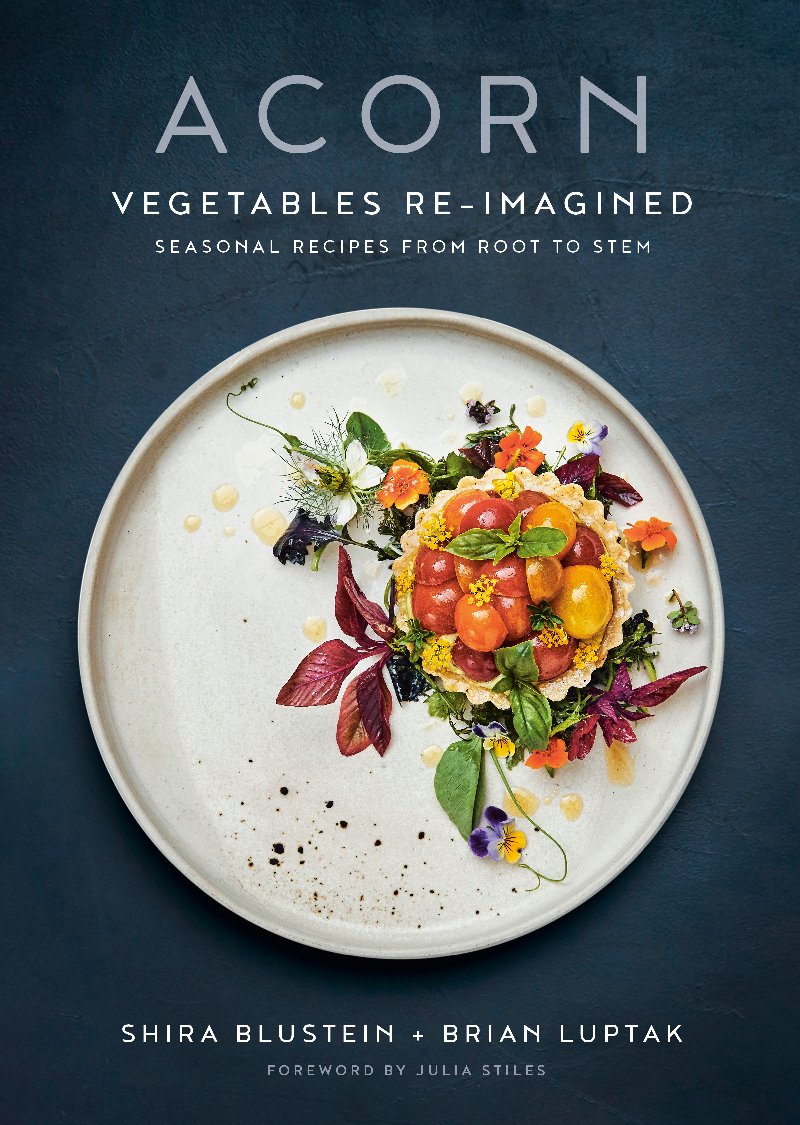 Wash the chopped celery leaves and stems well. Then, using your hands, massage the salt into the leaves and stems, making sure it gets into all the folds; don’t be afraid of bruising them.

Transfer the celery leaves and stems to a sterilized 64 oz mason jar or glass container. Pour in 4 cups of water and the garlic and stir.

Fill a resealable plastic bag half-full of 2% salted water and seal it tight. Float the bag on top of the liquid, using it to keep the celery leaves and stems submerged under the water.

Secure a towel or piece of cheesecloth over the container (rather than using a lid) so that the liquid can breathe—this is an important part of the fermentation process to let gases escape.

After 4 days, strain the liquid into a separate jar or container, using a spatula or spoon to press the celery leaves and stems into the strainer to get as much liquid out as possible.

Wash and dry the cauliflower mushrooms and cut into 2-inch pieces.

Heat a frying pan on high heat and add the olive oil and mushrooms. Cook for 30 seconds, stirring often.

Season with salt and pepper and serve immediately.

Author's note: This is a very fast sauté; you want to cook these mushrooms so they still retain their texture and structure.

Preheat the oven to 400°F. In a large bowl, mix together the cauliflower mushroom stalks, sliced white mushrooms, onions, garlic cloves, 2 tbsp of the olive oil, and the salt.

Spread the mushroom mixture on a baking sheet lined with parchment paper and roast on the lower rack of the oven for 15 minutes or until nicely caramelized (this gives more body to the stock).

Remove from the oven and transfer to a large saucepot. Add the remaining olive oil along with the celery, bay leaves, peppercorns, celery water, and 12 cups water.

Bring to a simmer and allow to simmer for 30 minutes, stirring occasionally to prevent anything from sticking to the bottom of the pot.

Strain the stock through a large-holed sieve or strainer. Store in an airtight container in the fridge for up to 5 days. 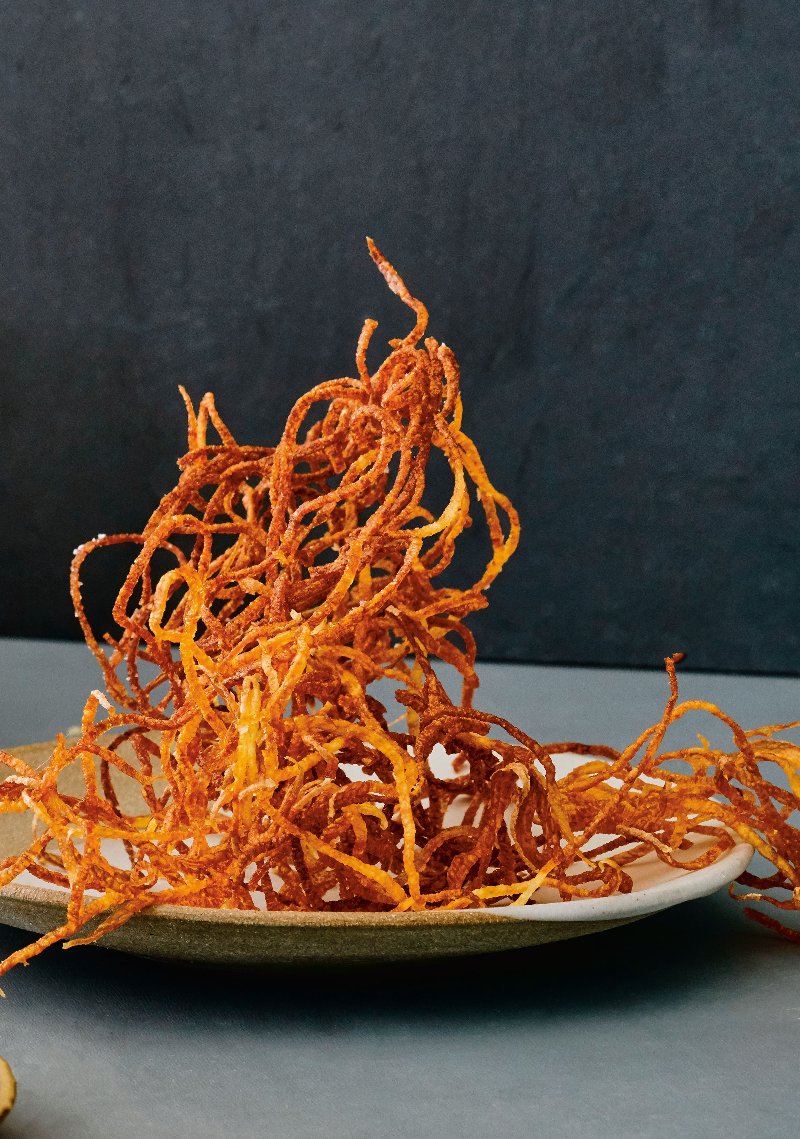 In a large bowl, stir the salt and the cream of tartar into 12 cups water. Wash the potatoes thoroughly, keeping the skins on.

Add the potato noodles to the water and soak for at least 5 minutes, but no more than 10. This will help soften the potatoes, making them less brittle when you wrap them around the cauliflower.

Trim the cauliflower’s outer leaves and set aside six florets, approximately 2 inches each. Take the trim, stalk, and other scraps of cauliflower and roughly chop into smaller pieces, then add these to a food processor. Pulse until they’re the size of rice grains. Measure out 2 cups.

In a large bowl, season the reserved cauliflower florets with the olive oil and some salt and pepper, and toss to evenly coat.

Using five or six potato noodles per cauliflower floret, tightly wrap the noodles around each floret, making sure to overlap two or three times.

You can make these 1 day in advance and store in an airtight container in the fridge until ready to cook.

Author's note: This recipe requires a spiralizer, which is a tool used to turn vegetables into long noodles. It is best to choose potatoes that are an even oval shape, as this will produce longer, more uniformly sized noodles.

Line two plates with a kitchen towel or paper towel. Place the canola oil in a heavy-bottomed, high-sided pot.

Using a pot thermometer, bring the oil up to 350°F. Working in small batches, fry the potato cauliflower nests in the oil, rotating and flipping them until they are uniformly crispy and there are few to no bubbles of moisture escaping from the potato.

Using tongs, carefully remove the nests from the oil and transfer to one of the prepared plates. Season with salt.

After the nests are complete, working in batches, carefully sprinkle ¼ cup cauliflower scraps into the hot oil; be careful, as the moisture from the cauliflower will initially bubble up. Fry until they are an even golden-brown color and there are no more bubbles of moisture coming up.

With a slotted spoon or spider, carefully remove the cauliflower and transfer to the other prepared plates. Season with salt. Repeat until all the cauliflower has been fried. 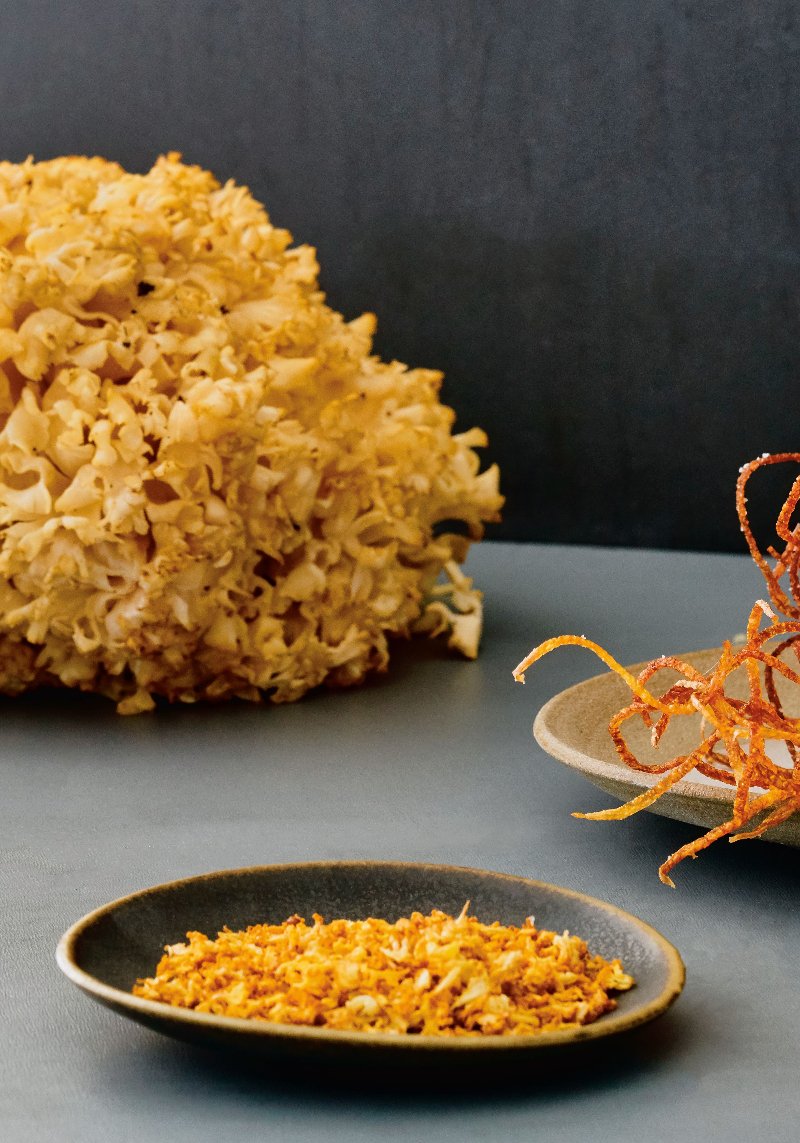 Author's note: We like the higher starch quality of carnaroli rice for our risottos, as it absorbs the flavors of the stock a little better than arborio rice. Don’t rinse the rice first; we want to keep those starches on the grain.

Place the cauliflower mushroom stock in a medium pot and bring it up to just under a simmer. Maintain the temperature of the stock so that it’s at the same heat as the rice.

In a large sauté pan on medium-high heat, sweat the onions in the olive oil until they are soft and translucent. Add the rice and toast for 3 minutes, stirring often. Add the white wine and cook for 1 minute, stirring often. Season with salt and white pepper.

Ladle in 1 cup hot cauliflower mushroom stock. Let the stock cook, stirring constantly, until the rice is a little dry and screaming for more liquid.

Check for seasoning and serve immediately. 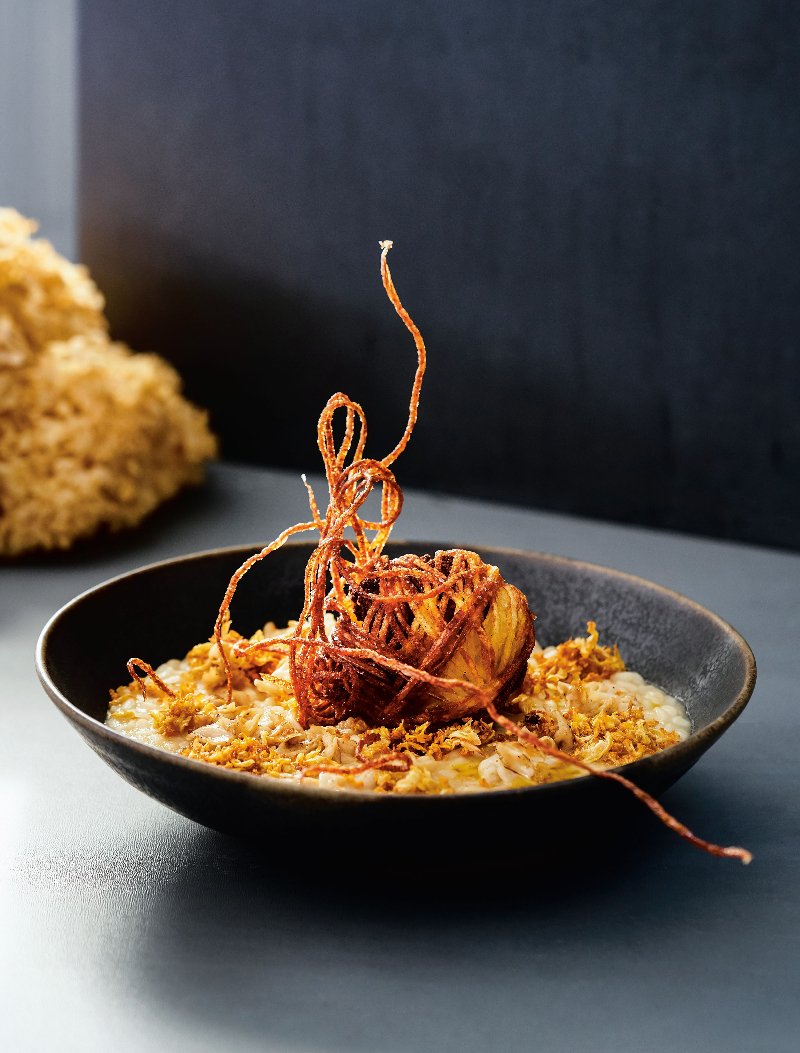 Lay out six bowls. Evenly distribute the risotto between the bowls and add the sautéed cauliflower mushrooms.

Place one potato cauliflower nest at the center of each bowl, and top with 1 tbsp pickled oxeye daisy buds. Finish with 2 tbsp crispy fried cauliflower sprinkled over each plate.