A lot of people still don't really know what Saskatoon has to offer. Growing up there, I can tell you that the city has always been a rising pool of talent for musicians and artists (they've got one of the largest jazz festivals in the country), but the food scene was something that really started taking off about five years ago. Near the beginning of that growth, Christie Peters (originally a Saskatoon native) and her partner, Kyle Michael (Vancouver-born), moved to town.

This duo first started their culinary careers working out west in Vancouver under Rob Feenie and in other notable restaurants, then they travelled to San Francisco, as well as overseas to Amsterdam and Spain. The pair eventually returned home to stake their claim in Saskatoon's food scene, starting with The Hollows in 2011, a contemporary restaurant in a heritage building in an area where, at the time, wasn't quite as vibrant as it is now. The establishment also marked a turning point in the developing neighbourhood of Riversdale, which has flourished in just four years. This spring, the couple opened Primal--a Italian-inspired restaurant that prides itself on handmade pasta made from locally-ground Saskatchewan grain--in a building just a few blocks away from its original spot in the same area .

Here, the two chefs share their thoughts on how Saskatoon's culinary industry has evolved and the great ingredients they've come to discover in the Prairies.

Why did you decide to move home to the Prairies in the first place?

CP: I grew up here and have always loved Saskatoon. The whole time I was working elsewhere, I was just seeing these big wigs in bigger cities running restaurants and thinking how no cook could ever start a restaurant there without a whole bunch of investors. I kept looking to Saskatoon and I wanted to come back here so bad because it was in such a young stage [at that point]. I knew I could actually have a real opportunity here. We got our foot in the door here with no investors, which is really amazing!

Riversdale four or five years ago was quite the opposite neighbourhood of what it is now. What drew you to open a restaurant in a very up-and-coming (I'm being P.C. here) area like that?

CP: Working in Vancouver, I watched the downtown east side progress so much, and I was hoping that's what would happen here in the neighbourhood we’re in. I worked in Gastown in Vancouver too, and I just loved the vibe of it and that’s sort of like what Riversdale is in Saskatoon. A ton of people thought we were crazy for opening up The Hollows where we did. People had that, “You can’t walk past that block in that area, it’s not safe” point of view. But, I’ve seen that the location could work because of Vancouver. You'll see a needle exchange and a nice restaurant on the same block and it's fine.

So, when you first came back to the city from Vancouver, which has a more progessive dining scene than most other Canadian cities, did you hold back from anything, in terms of your concept or menu with The Hollows?

CP: At first, I was kind of nervous of doing a vegetable-forward menu at The Hollows. Even my friends told me, “What does that even mean? No one here is going to know what that means.” But, I hoped they would! It took a while, but we definitely have a loyal following now and we are able to do some more interesting things with the menu, year after year.

So, what’s an example of something that wasn’t very popular a few years ago, but you think people would be into now?

KM: Something like beef tartare: put it on in the past, never sold. Now, it sells.

CP: Yes, and people trust us more now too, so we can put on things like beef heart, tongue or cheeks. We just want people to have trust in what we’re doing and then we can take more and more chances. At Primal, bone marrow is our best seller. I don’t think anyone was doing it here before and now it seems like it's all the rage, which is funny because in bigger cities, it’s already had it’s day, you know?

Your new restaurant, Primal, is definitely the hot spot in the city right now. Why did you guys want to go the Italian route with the menu?

CP: It’s my favourite thing to eat, too. We also realized that the funniest part is that we love Ask For Luigi, Flour and Water, restaurants like that. We were laughing about trying to create food that is very time and place [specific]. Out of anywhere in the world, Saskatchewan, the bread basket of the world where we grow all the wheat and all the grains, is the place where we should be making and eating pasta. We can get locally-ground flour, local heritage grains. Most grains get exported, but smaller farmers working with heritage grains can supply us directly. Brin Rawlyk at The Night Oven helps us with that, to mill different grains for us and whatnot. 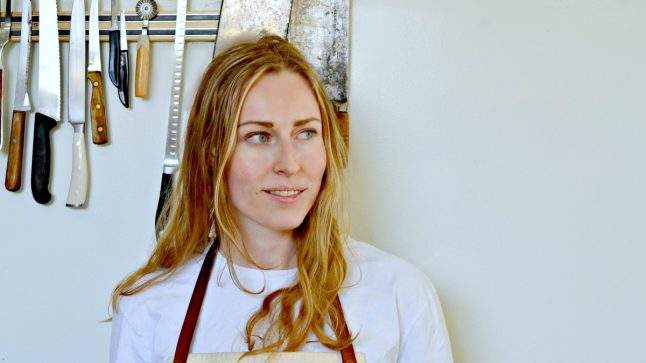 How do you split the workload between Primal and The Hollows?

CP: Kyle and I still cook everyday so we don’t need that many cooks. Kyle is in charge of Primal and he has one other guy who cooks with him on the line. Our friend Scottie--we all cooked together in  Rob Feenie's restaurant in Vancouver years ago--he moved out here to work with us at The Hollows with another person. For me and because of the proximity between our two restaurants, whoever is busier or needs more help, I run down the alley.

Both of you have told me that you are not formally trained. I don't think finishing school makes you a chef, nor does a few years of kitchen experience. So, to you, when should a person consider himself a chef?

KM: It is the worst when a student finishes a program like that and they’re told that they’re chefs when they’re done. If I have any advice for young chefs, it’s to go to one of the best restaurants in their city and work for free. It can be better than being put through school; you can learn so much in school that you won’t learn at a restaurant job and vice versa.

CP: I would say when they are making the menus, when you are actually getting to create the menu at a restaurant, you are the chef. That or if you’re runnning the entire crew, you could also be considered a chef. Those are the two things that I say differentiate a cook from a chef.

What do you say to people who are quick to write off smaller cities like Saskatoon or Winnipeg in terms of a food scene?

CP: I’d tell them to think about places like Fäviken and stuff. Restaurants that are in the middle of nowhere and doing something really special and recognized on a world scale, those places can be anywhere and you'd never know. Something special can always happen in those places, especially when there’s undiscovered ingredients and other undiscovered things. Plus, with the internet and social media now, holy shit! People can be in the middle of nowhere, but still be so connected with the food scene. I feel like anything could happen. So, I would never write off a place.

Do you think Dale Mackay moving home to Saskatoon to open Ayden Kitchen and Bar in 2013 has gotten the city a lot more attention?

CP: Yes, but I also think he has an amazing PR team that costs money that I don’t have. Ha, ha, ha.

KM: I think it’s bringing more folks to the city itself, for sure. Before, people growing up here might have thought that if they wanted a career in cooking, they’d have to move to Vancouver or Toronto. When there’s more high-profile chefs in the area, it’s a good thing. It makes cooks want to stay.

What’s a Saskatchewan ingredient you’ve discovered that other people in Canada might not even know about?

KM: The wild berries here are pretty cool. The sea buckthorns, the buffalo berries...I was sending pictures to my chef friends in Vancouver at first [because they looked so foreign to me].

CP: The crab apples, or, maybe Prairie apples would be a better way to describe them. There are a lot of different types of apples here that you don’t see in the Okanagan, but they’ve got so many interesting flavours to them!