Whether or not you beat out your competitors and win a season on a show like Top Chef Canada, the national exposure can be a powerful springboard into culinary success. As shown by shining examples like Dennis Tay, Geoff Rogers and Carl Heinrich, there's no doubt that the Top Chef Canada has helped many chefs in its family tree across the country root themselves as notable members within their perspective cities' culinary scenes. Vittorio Colacitti, with his first restaurant, The Good Son (opened in summer, 2014), is no different.

From poorly made tacos in Toronto to the necessity for world travel, here are Colacitti's thoughts on working as a chef in Toronto and beyond.

You’re Italian and I think everyone knows that food is a huge part of that culture. Was cooking always in your blood?

Definitely. I started because I grew up around food. My father would take me around the world travelling. He worked for an airline. He was always showing me good food wherever we were. My mom was a chef. Well, not officially, but she ran the kitchen in at a golf course when I was growing up and my one grandfather was a chef and my other grandfather was a farmer. Everything my family did pretty much revolved around food.

Who’s one chef that legitimately inspired you to keep going on your career path when you were younger?

Lorenzo Loseto at George. He was my mentor when I first got to Toronto and he really inspired me everyday. It probably sounds really corny, but he actually brought out the best in me. I didn't realize how good I could actually be and he showed me that.

I’ve always wondered how chefs decide between owning a restaurant, working in a corporate environment or just simply working for an independent restaurateur without owning anything. How did you make your decision?

Well, I tried being with larger groups. I worked for Loblaws as a corporate chef, and it just wasn't working out for me. I didn't see the standards of what I [personally] wanted to achieve. When you have an independent restaurant, you're working with, you know, three or four guys or girls in the kitchen and you can really express yourself. In bigger corporations, that's very hard to do. Then, on the other hand, you can run a restaurant for somebody else [but not own it] and at the end of the day, all you have to show is what you've cooked, but you don't actually have anything.

Did you get funding for your restaurant, The Good Son, after appearing on the final season of Top Chef Canada? Was that a good decision for you, business-wise?

It was an agreement I formed with my business partners before I went onto the show. After filming, I didn't tell them what happened, but I told them we really needed to push and [have the restaurant running] in a good time frame. I don't think the show helped me a whole lot, personally, but it definitely helped with hype of the restaurant prior to opening. I was feeling very confident, as well. It prepared me mentally and gave me the confidence to know that I had to go for it.

Reality shows are always pretty dramatic--case and point, the implied love affair between you and another chef during filming. Were you happy with the way everything turned out?

It didn't surprise me. Even though nothing happened between us, the producers were really trying to push for it, so I figured that it would be spun that way. In terms of my personality on the show, I was definitely very honest. I was myself the whole time. I didn't hold back and that was something that I told myself I had to do, to carry myself like I would in my regular life. I may have looked like a bit of an ass, but honestly, when I was out there, I was just trying to cook food. Any show like that is always looking for good drama to draw people in. It was tough to stay focused during filming because of that, but when I watched it after, I wasn't surprised with how things came out looking.

Is competing on a culinary competition series something you’d encourage your kitchen staff to do?

Absolutely. It's a great experience. Well, not always, I guess. Mike Robbins (a Vancouver-based chef) was the first person kicked off the show, which I thought was bullshit; he's a phenomenal chef. In that sense, it would probably piss off you a bit, but it's not like it actually hurt his career; it just made him try harder. Having an opportunity to be on a national television show to showcase what you can do and also compete with some other great Canadian chefs, for the most part, was pretty legitimate. They don't doctor it up. If you can handle the intensity, then do it for sure. 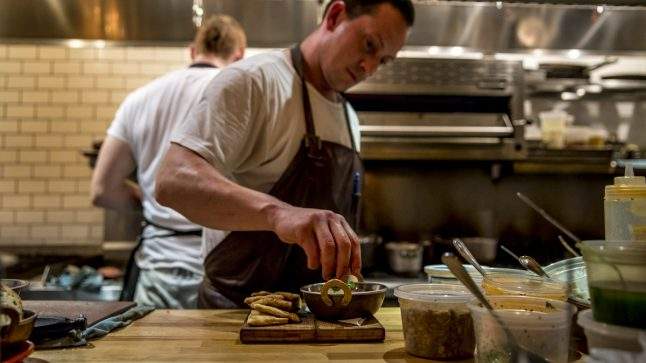 The Good Son’s menu is an interesting mix of different types of cuisine, like Italian and Southeast Asian. How did you decide what route to take with your food?

Before opening, I’d continually get asked, "What kind of food will it be?" My answer would always be that it's the food that I want to cook: seasonally-influenced cuisine that draws on the influences of different neighbourhoods of the city. I felt comfortable in that idea, but nobody else seemed to, so it pissed me off that I had to continually deal with that question, but I'm happy I stuck to my guns. I keep everything to its roots. So, if I make a pasta dish, I make it exactly the way I learned in Rome. If I make a mango salad, I make it exactly how I learned to make it on the streets of Thailand.

What comprises a restaurant experience that people will actually want to come back for, especially in a city like this where there are so many options?

It's all about making food that people will want to eat and food I want to cook. That type of food that's honest and approachable, but also flavourful. The biggest thing for me with eating out is that I find a lot of bland food, not just in Toronto, but all over the world. So, I try really hard to find that great balance of rich, sweet, sour, salty, spicy and implement that in every dish. Basically, make great food, have great service, a good wine list and decent beers. That's always a recipe for success.

What’s one dish you’re sick of seeing on menus in Toronto?

Bad tacos. A lot of places make tacos that are not traditional, which is fine if you want to make a type of fusion that works, then great; but most of time, I see tacos that are poorly executed and it seems to be this big craze. Mexican food, in general. I love Mexican food. For me, I haven't had amazing Mexican food yet in this city, anywhere.

You’ve been open for close to a year now, what have you discovered is the hardest part about owning your own place?

Staffing. Kitchen staff is so hard to find. Everyone wants to be a chef, but nobody wants to cook. They want to work in a great restaurant, but then can't handle a 14-hour day, they just fall apart. I’m not the type of chef/owner who cuts people a lot of slack because that's not how I learned. The reason I am as successful as I am--and I still have a long way to go--and the reason I am able to prove myself is because I have a strong work ethic and that's something that is lacking in kitchen staff these days. Front of house is hard as well, finding people who are genuinely committed, but these situations happen in every type of business. In restaurants, I just think it's more apparent because you can't just hide it.

Well, where do all of these cooking students go that graduate from George Brown College (and other culinary schools)? Do they just disappear?

I often wonder that. I think a lot of times, younger people will get into cooking because it looks splashy and exciting, but when you actually get into it, it's not as easy as it looks. I'd say a lot of them probably just give up, go work in a bank or whatever and maybe they still have that passion for cooking, but probably just do it at home. It takes a certain type of person that's really cut out for working in a restaurant. Then, you have that mediocre level of restaurants, like chains and what not, where they just want people to fill gaps, so maybe some end up there. I always hear one in 10 graduates are great coming out of school, but I'd say it's more like one in 70!

Do you think travelling is essential for a chef’s career? Can you be the best chef in a city without being well-travelled?

I think you absolutely have to leave your city for awhile. It doesn't matter whether you grew up in Madrid or you are in Toronto; you have to expand your horizons. The authenticity doesn't lie in just working at a great restaurant. Authenticity lies in the roots of cooking, discovering what it really is. I'll use Italy as an example because that's where my family is from and I've been to Italy over 50 times in my life. To go there and actually eat food in the countryside, you know, having a piece of prosciutto that's just cured with salt and hung dry, it's a different level. It's not only the food you're eating, it's being immersed in a cultural experience, too.

No matter what type of food you're trying to cook at the end of the day, it's just great to get those perspectives. You can stay in one place and learn great skills and technique, but by staying put, you'll never learn that sort of sixth sense that comes from travelling.