"Do you know what chefs love? Punctuality."

The message popped up on my phone while I was in a cab en route to Deseo Bistro, one of chef Scott Bagshaw's restaurants in Winnipeg. 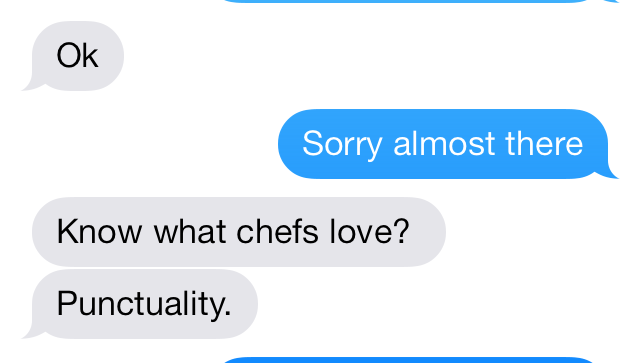 Alright, I may have been running a bit behind for our interview on this particular morning and the message was not unreasonable. Nonetheless, I'd be lying if I wasn't feeling a little stressed.

Bagshaw is one of the city's top chefs. Well educated and experienced, he has garnered accolades for both his original eatery Deseo Bistro (it claimed a top spot in Where's best new restaurants in Canada list a few years ago) and the newly opened Enoteca. He has collaborated with other notable chefs in town like Mandel Hitzer and Adam Donnelly, his flavours are balanced, his plating is clean, but like most notable chefs in this country, he has a bit of reputation that precedes him.

I arrive and realize that the chef was just giving me a hard time. Phew!

Like any creative mind, Bagshaw is not without his demons. The chef had some controversy a few years ago for being "too candid" (that's a euphemism) in an interview, as well as for the fairly aggressive social media lash out to the city's restaurant critic, who I've never met, but have heard varying opinions about. That being said, we all have our critics, so the truth is likely somewhere in between the two sides.

But, I wasn't there to talk about that. I have always been more than impressed with the culinary experiences I've had in Winnipeg, so what I really wanted to hear about was the chef's thoughts on being a large part of making the food scene in this Manitoban city what it is today.

So, are you a born and raised Winnipegger?

I was born in Montreal, but spent my formative years in Winnipeg. I worked in restaurants for a long time, went to university, then packed up to go travel the world. I ended up teaching in a city south of Sydney and I was working in a restaurant out there to pay for bills again. I hated teaching, so went back into the kitchen full-time and realised that it was something I really loved doing. It wasn't just a means to an end anymore, it was the fact that [up to that point] I had pretty much been cooking my whole life, so I made that jump into making it a career. The food scene out there 12 or 13 years ago was really ahead of its time.

Where did you end up working once you get back?

I worked at Sydney's at the Forks for a few years, then left to open up Pizzeria Gusto. Then, there was a big, um... I said some stuff while working there [laughs]. Anyway, I moved on and then I went on to open my first place, called Deseo, downtown in The Albert which was this renowned sort of punk bar/hotel. The kitchen was decent, it was a small little place. We opened it and it worked out and did well, but then there was a flood, everything was done. After that, it was either find a new spot or go back to working for somebody else, which I didn't want to do and that’s when we found this place that we’re sitting in right now.

What was it like renovating and opening Deseo Bistro?

We worked on it for three months non-stop with literally no money. Zero dollars. I owed suppliers, electricians, I fucking owed everyone. I remember one day, I was in the back, cleaning out the old office and I found a ten dollar bill and it was the happiest day of my life. I can get some Gatorade and jerky at the shop across the street. It was rough, but after Deseo opened, it was great, we were really busy, we were named on the top new restaurants in Canada, top restaurant in Winnipeg and yeah, it's still going great!

Your new restaurant, Enoteca is getting a lot of buzz lately. Why did you want to open a second place?

I had always wanted a small space. Deseo came to be because the space was available and I needed something at that moment, so I had to do it. I was actually cold called from a realtor from the new spot. He told me it used to be a Quiznos and I laughed, but I went to go look at it. It was a box. Just a plain square, but a workable square. The ovens were still there, the Quiznos toaster -- I could have literally opened a Quiznos the next day if I had wanted to. It had all of the equipment, walk-in freezer, walk-in cooler, sinks, dishwasher, prep fridges; and it was only two years old. It required some tinkering, obviously, and some major aesthetic work, but as far as its structure, it was fine. It was like a perfect storm of greatness that fell upon me. Great location and there was parking, too!

I’m not from Winnipeg but it seems like a pretty obscure location.

To the naked eye, it's the worst location. It's right near railroad tracks, in a strip mall, in what seems like the suburbs, but it's actually in an incredible little spot. There's nothing out there and I'm not even talking about bad restaurants. There's maybe three restaurants in the area. We're also on the cusp of Tuxedo, which is this super wealthy area. If you go further down the other way, you're going into River Heights, full of young professionals and families, so we've got a great demographic around there.

We demo-ed and reno-ed in three weeks. Got all of our permits and everything from the city. It was a record. I only had one week where I didn't have to pay rent and in that one week, I had to make enough money to actually be able to make rent.

It can be pretty hard to find good staff in the kitchen, do you see that problem here in Winnipeg?

It’s not that hard for me, personally. I know what it’s like to be in the kitchen, so I treat my guys who work for me and do a good job really, really well. I know what it was like when I was growing up in the kitchen, and there were things that I hated about those times. I wouldn’t ever want my employees to deal with some of those things. At my restaurants, it’s a fun environment. No “Yes chef!” or “Oui chef!” There’s room to be experimental and play around.

Do you find yourself latching onto trendy ingredients or certain techniques?

I used to follow trends really, really closely and now I’m a lot more wary. If something new comes out that is getting some buzz, I’ll fool around with it, for sure, like black garlic. I was using it three or four years ago, and I loved it whether it was a trend or not, and I still use it now. I don’t see anyone using it now in this city, but I think it’s an incredible product. Something like molecular technique, I was never really interested in and that whole farm-to-table concept is... you know, it’s Winnipeg. You can only strive for that for so long and proteins from Manitoba are really expensive. Like really expensive. So, I don’t know; I do what I like, essentially. At the end of the day, a lot of it is just me being stubborn and doing what I want to do.

Who is one chef whose approach to cooking you really admire?

I love David Chang. He’s basically how I base the operation of my two places; the model of how to do things. The guy is a genius! I’ve eaten at his place three times in New York and he’s amazing.

You know, I’ve yet to meet a chef who doesn’t love David Chang. Why is that?

He’s a chef’s chef, you know? He’s humble, he’s smart, he even admits he’s not a great line chef, which is awesome.

I quit working line here at Deseo Bistro two years ago because my guys here are better line workers than I am. I’m fine at it, but I’m 40 years old; I’m getting tired. These guys are younger, faster and sharper than I am. I can do the prep and the mise and make sure all the components are spot on; but my guys here, they cook it better than I do. And David Chang admits that too.

Do you find diner mentality can be a roadblock to progressing food culture in smaller cities like Winnipeg or Saskatoon?

Winnipeg can have a "kicking and screaming" sort of mentality when it comes to something new [in the food scene]. Either you do what you do well, or you just shouldn’t do it. Sometimes, you need to just stick to your guns. I have to give props to Adam Donnelly for bringing tapas to this city. Just small, traditional small plates, because that’s how I like eating. Trying lots of little things and sharing. Without that small plate sort of mentality, there is no way Enoteca would have worked now.

If I picked up Deseo or Enoteca and dropped it in an area like Gastown in Vancouver or Queen Street West in Toronto, do you think either would be as notable as they are here?

You know what? I don’t want to sound [arrogant] and this is other people telling me these things. I’ve had people that have eaten at Enoteca or Deseo and have said that they have eaten all around the world and the food here ranks right up there with some of the best that they’ve had. One person told me it was as good as French Laundry. Are you fucking kidding me? That’s a bit of a stretch [laughs]. But, hey, if people believe that, that’s an awesome compliment, obviously. It does mean a lot to me.

So you’re saying a particular city that someone works in doesn’t necessarily dictate a level of sucess in the food world?

Well, you were just saying that Calgary has had a lot of mediocre restaurants open in the past couple of years just because they’ve had some good investors behind them, so I think there’s something to be said about a little guy and people will always love an underdog. A little guy going in with next to no money, opening up his own dream restaurant -- I think I could do well in any major city and I think a lot of chefs in this city would do very well, if they would try to do the same thing. There is definitely a bit of that big fish, small pond situation here, but there is a ton of talent in this city. We have more than enough talent to succeed on a national, if not global scale.