You'll have a pretty hard time finding a chef in Canada that's more naturally and honestly collaborative than Winnipeg's Mandel Hitzer. In the Exchange district, you'll find Hitzer's popular restaurant, deer + almond, a lively space packed with local artwork, locally-designed plateware, happy diners and some refreshingly fun, creative cuisine. If that doesn't keep him busy enough, his yearly winter culinary event, RAW: Almond heads into its fourth year of operation this coming January on the ice at The Forks, which sees a long list of chefs cooking together for 21 nights, at the lowest temperatures.

As the weather cools across Canada (or, in some cases, already here. Sorry, Yellowknife!), Hitzer is currently hard at work figuring out the details for RAW 2016 with his event partner, Joe Kalturnyk, before it kicks off in mid-January. Somewhere between running his busy eatery and planning for the frozen river restaurant, Hitzer sat down with me to talk a bit about how he's helping to get people around the world to turn their attention to Winnipeg, the ins and outs of RAW and one dish the chef thinks his city does better than any other in Canada.

Is it hard to get your point across when you try to get chefs on board to come and cook at RAW: Almond, just properly conveying exactly what it was?

For the most part, chefs are really hands-on, so to describe what RAW is to someone and for them to wrap their head around it is hard sometimes. Once you start sending pictures, looking through the website--and I physically went out there and met people, going to Montreal to meet people one-on-one and shaking their hands--that stuff goes so far. It's tough at first, but when you are really able to sit down and explain it properly, they get it. I've reached out to a few people in Europe for this year and I was in Spain earlier this year. Who know who [might take part this winter]?

What's the most shocking thing to a chef arriving in Winnipeg to cook at RAW for his or her first time?

The interesting part is that all of the food is prepped offsite at my restaurant. An out-of-town chef's expectations can be surprising when they need to do prep work in such a small place. Trying to stake out space in the coolers and bringing everything to and from--it's essentially a gigantic catering event on the ice for 21 days! 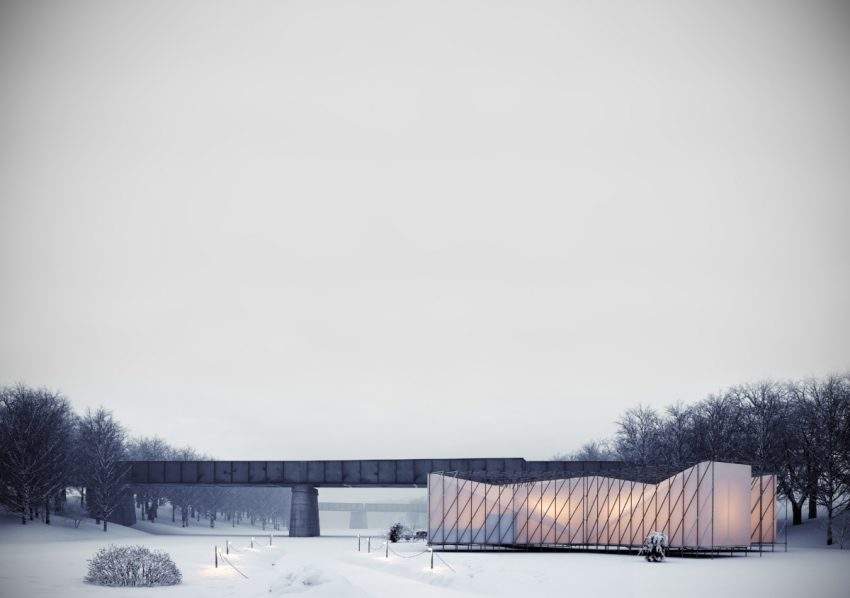 Last year, an architectural firm from the United Kingdom did the design of your river restaurant. What did you decide for winter 2016?

Instead of going outside of Manitoba, we wanted the competition to come back to Canada. Last year, it was great having someone from overseas to design our structure and it got us a ton of exposure, but after, we asked ourselves, "Why don't we keep this completely Canadian?" We're making sure to approach the University of Manitoba architecture students, too. It's a great opportunity. Every chef that's been a part of the pop-up can put that on their resume or profile, but what about these young architects? We're hoping that we can let people put their design theories to the test in an environment where they have actually grown up.

Tickets for RAW sell almost as fast as Taylor Swift's shows. What's the plan for this year?

For our first day of ticket sales last year, we did everything online, which made things kind of tricky for me.

My idea for this year is that on the first day, tickets will be available at a booth we set up somewhere central, just like for an old-school concert, on a first come, first serve basis. The second day, all of the remaining tickets in will be available online. One thing that's really important is that the diehard food lovers here in the city have the first bid. They are the ones who support our businesses, day in and day out. I'm not trying to play favourites, but it just seems right to me.

Are there certain dishes that you think would be bad to serve in a restaurant on a frozen river?

We haven't really ran into something we haven't been able to do yet, to be honest. Actually, tabletop grilling is hard to do. We tried doing a yakitori (Japanese skewers) DIY grill sort of thing where people could grill meat, but people weren't grilling as fast as we were supposed to be setting out courses and it also caused so much smoke that it was smoking the other tables out. We thought it would be fun, but it was a weird one. I don't think we'll try that again.

What's the most surprising thing that you've seen come out of RAW for yourself, personally, and also for Winnipeg as a city?

For me, it's the resilience of support that I've had, helping to build this community here in Winnipeg. People constantly tell us that we do a really good job. I'm like, "Jesus Christ, I'm actually a part of my city now!" This is a city that I've always really believed in.

For Winnipeg, it's the fact that we get emails from people all over the world. One person from Winnipeg has a nephew going to school for architecture in California and he is using RAW: Almond as an example of temporary structure in his class. We've been in Conde Nast Traveller, the New York Times twice. Just the fact that people are talking about Winnipeg is amazing. It means people are then talking about Canada, too.

You have mentioned before that you and Winnipeg chef, Scott Bagshaw used to not really get along, but now you collaborate regularly. What fixes a rift between chefs?

I always joke that the river brought us together for sure. Ha, ha. I called him up the first year and said, "Hey man, we should totally cook on this river together." He said, "Yeah, you're right! Thanks for inviting me." Now he's like my pop or mentor in a kind of way. I can call him up whenever I'm struggling with something and he'll always help me out.

I am always telling people what I big fan of Winnipeg I am, but I'm always surprised that it seems even livelier during the winter.

We have to be that way, man. Fuck, we really have to! It's so crazy cold!

Has the food community here always been this vibrant?

I've been cooking for almost 20 years here. It has changed so, so much in the past decade. I often joke that I don't know if my restaurant would have been able to last here 10 years ago. We're still growing and learning. A lot of new places are opening up right now. A lot of young people are willing to take a risk on something. We're now entering the realm of specialty food. We have those guys who are making their own cured meats, making their own cheeses and their own doughnuts. It's neat. It's changing drastically and people are being supportive of us. Small business across the board in Canada are really, really difficult to maintain. Being a small restaurant in that big machine is really cool because we are pumping culture directly into our system on a plate.

What do you think is one restaurant concept that Winnipeg is missing and what's one concept there's too many of here?

I don't know if I should say the one I think that we're missing because I want to be the first guy to bring it here! Ha, ha. I want to see more shawarma here. You go to Toronto and it's everywhere and it's so good. There's not enough of that.

One dish your city knocks out of the park compared to other Canadian cities?

Our burger scene just destroys other cities, through and through, in my opinion.

Those are fighting words! Do you mean good greasy spoon burgers or good gourmet burgers?

That, my friend, is a conundrum in and of itself! We crush almost every city in Canada when it comes to burger. Even those poor guys in Alberta who have all the good beef. Ha, ha, ha!