It's pretty unusual for chefs to move from the East to the West, but that's exactly what chef Curtis Luk did several years ago when he decided to leave his position at Courtyard restaurant in Ottawa to help his pal, Trevor Bird, open up his (now) famous Vancouver eatery, Fable Kitchen, over 3 years ago. Originally from Toronto, Luk has worked in kitchens for quite some time. With places like George and Atelier on his resume, you can tell he likes his tasting menus, a concept he's currently working to make more approachable at his new restaurant, Mission, in Vancouver's Kitsilano neighbourhood which food critic Alexandra Gill recently gave a glowing review, deeming it as one of the best new restaurants in the city.

Sitting down to talk before the dinner rush starts, Luk opens up about what it's like moving across the country, why he doesn't like olives (say what?), what takes a chef to his breaking point and more. 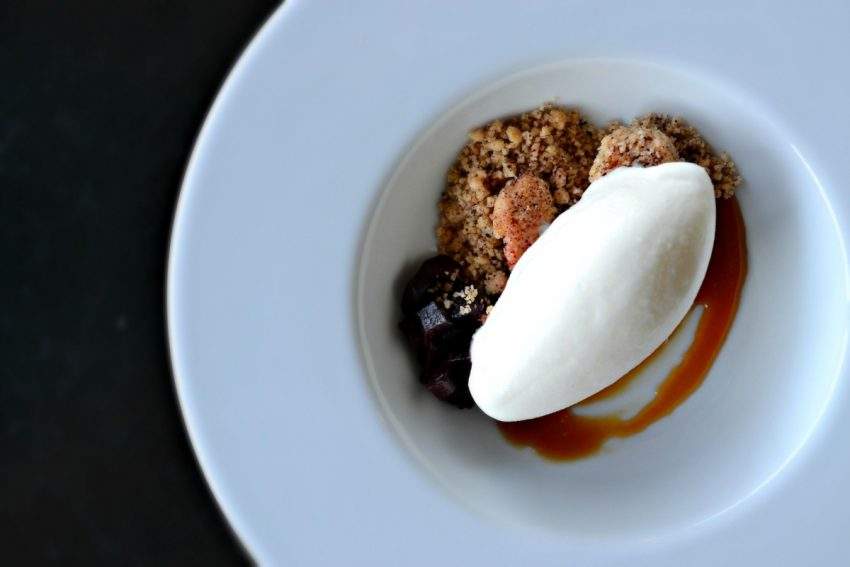 When you arrived in Vancouver, what's one thing you realized about the food community here that you didn't expect?

A lot of farms here are more accessible than I thought they’d be. A lot of producers are closer to home. There’s a farmer just across the Oak Street bridge in Richmond and Urban Digs Farm is in Burnaby. I mean, that is really, really close to here. It would be like working in downtown Toronto and being able to go to a farm in Scarborough. That definitely took me by surprise. A pleasant one, of course!

Since you've experienced both, what's the main difference between the Ottawa food scene and the Vancouver food scene?

I think both cities have a great bunch of chefs at a high level working with good, local ingredients. That sort of movement is prevalent in both cities, but the difference, I would say, is that there is much more emphasis on food and dietary trends here in Vancouver, for sure [more] than you would find in Ottawa. It has been three years since I’ve been there. You see a lot more yoga pants here than you do in Ottawa, if you know what I mean. Ha, ha, ha.

You've been the head chef at a few places, but Mission is the first place that's actually yours. Has this restaurant concept always been your dream?

Well, I’ve always had a vague idea of where I wanted to go. Perhaps some chefs have a much more clear direction, but I’ve always been heavily influenced by the things around me, in terms of coworkers, ingredients I see or the character of a particular restaurant. I have always had ideas, but for me, it’s more of the way to do something and the approach that I take towards building a restaurant and serving a guest. The functionality and service aspect, not so much specifically the, “Oh, I really want to work solely with this cuisine or these ingredients”.

Because you are now partnered with two of Fable's owners (Kathy Schleyer and Ron MacGillivray), did you feel pressured to do something similar with your concept here at Mission?

Not pressure, no. It just happened that what I wanted do was similar to Fable to some extent [in terms of locality of ingredients], but also different. Also, for my business partner and me, it just happened to be a happy coincidence that our views aligned.

What's one thing you can do in the kitchen better than Trevor Bird?

What’s it like having a restaurant in Kitsilano as opposed an other area of Vancouver that are maybe more "food-focused" like Gastown?

Areas like downtown, Gastown or Yaletown, those types of places have a much stronger happy hour, or “right after work” dining sort of vibe, whatever you want to call it. You do get a different clientele. I do think people are willing to venture outside of their “safe zones” or neighbourhoods to some extent though, so we will get people here who are not from the neighbourhood. Being a restaurant here in Kitsilano, I think a big part of being successful is really embracing the neighbourhood. It’s our job to introduce ourselves to the neighbourhood and let those locals know that we’re here now and welcome them in to come give us a try. That’s something that might not be quite as important if your restaurant is right downtown or Gastown or wherever.

What makes a chef want to quit his job?

I'd say the number one thing is lack of success. If your restaurant doesn’t have that feel of driving towards success or a milestone or goal, it’s so easy to be disillusioned and feel lost and think you can find something better. Another thing, of course, is just the job load. Although the culture has always been one of trying to push yourself as hard as possible, there is the point of no return and it’s important to make time for other things. If you have a family, [the workload can] always be riding on you, I think. Even if you don’t have a family, there’s always those eternal desires to go see the world or settle down with someone.

You are pretty mellow outside of work, do you ever snap in the kitchen?

I never believe chefs when they say they love to cook and eat everything. What's one ingredient you don’t like at all?

I still haven’t really taken a liking to olives. There are a couple varieties I find acceptable to eat, but you would never catch me snacking on a bowl of them. I just didn’t grow up with them. I also don’t really like pickles or overly acidic things. For me, incorporating a component like that into a dish has always been tough. I will generally make pickles a bit on the sweeter side when I need to use them. Although the Chinese food culture I grew up with used vinegar and sour elements, it’s not quite in the same way as you would in European cooking methods.

Looking back to three or so years ago, you drove all of the way here from Ottawa. That's a lengthy roadtrip! At any point on the way, did you ever think to yourself, "Oh shit, what if this doesn't work out?"

I don’t think I’ve ever doubted myself whenever I’ve made a big decision like that. Every step I’ve taken, no matter what happened in the end, I still took something different out of it. You always get exposed to different things, different people and products and all of that is good. There’s always a positive in everything, I’ve never looked back and been bitter about something in my career.

Behind the line: Vancouver chef Geoff Rogers of Blacktail Florist