Most female chefs will happily tell you that they get pretty sick of that, "So, what's it like being a woman in the kitchen?" question that's asked in almost every interview. But, like many questions, it can be an interesting, albeit predictable, one to throw out there.

Being the executive chef of the Fairmont Waterfront in Vancouver comes with a lot of responsibilities, including overseeing a ton of staff members, banquets and events, ARC-- the hotel's restaurant, formerly Heron's, but was reconceived last year--and a giant rooftop garden where the restaurant harvests anything from rosemary or kale to honey for use on the menu.

Along with the scope of responsibilities, another notable thing about Hauser taking this top position with Fairmont in spring, 2012 is the distinction of being the first female executive chef in the history of the company.

She has spent time working in Toronto and Bermuda and had the opportunity to cook at James Beard House in New York a few years ago. Here, the well-traveled chef talks about leading the way for restaurants under the Fairmont umbrella, advice for young chefs and a lot more.

You were born on the East Coast, so how did you find your way all the over to the other side of Canada?

Long and short of it, I was doing psychology in university and I was just bored, really bored. In my life, I had always been used to being part of a team and being a captain of a team. My girlfriend was going into culinary school at the time and I thought, "Hey, why not try this?" I fell in love with it from the very first day. I went to school in Ontario. I did four months and then a work placement at the Jasper Park Lodge. It’s funny, the chef there actually hired me because I was from Newfoundland and he liked the conversation that we had, really casual and [Newfies] can laugh at the stupid stuff, you know?

How long ago was that?

That was 16 years ago. They offered me an internship, so I stayed and I’ve been with Fairmont ever since; Jasper, then Bermuda, then Toronto, and now here and every single place I’ve worked it’s been a good four, four and a half years.

It’s been three here. Are you getting the itch to move?

Oh, yeah. It’s a great company because I get to travel around. Not only do I get to travel with work, but I get to travel and stay at other properties all over the world. For me, it’s really a win-win because I love to travel. But yeah, for me, it’s tough. You can easily get sucked in [to stay in one spot] especially because there is so much to do, being an executive chef of a hotel. It’s great because I’m involved in big picture hotel operations, one side of it, but also because Vancouver is such an incredible food city. There is so much to see, do and learn here still!

Last spring, Fairmont Waterfront reconceived its older restaurant, Heron’s, into ARC, something much more contemporary. What was that massive change like?

What was exciting about this is that we were rebranding this as a standalone restaurant. When you get into hotels, it gets tough because you have to cater to your in-house guests, but then we really wanted to be able to cook for the neighbourhood, as well. I really do feel like we’re doing that now. There’s a lot to consider, but when you look at restaurants like Wildebeest, Pidgen, those kinds of spots, that’s who I’m competing with and I think that if I was to compare the food style at ARC to any other restaurant in town, it would be Wildebeest. We’re still playing all the time, we’re stepping more into the sharing concept, big meat platters, that kind of thing, and it’s going over really well!

Hotel or not, you have one of the coolest rooftops set-ups I’ve ever seen for a restaurant. A huge garden, including a fig tree, and tons of bees. Was that all you?

I didn’t start the rooftop initiative. Both the beehives and the garden were here before I was. However, when I came on board, I expanded the beekeeping program, another 20 hives going off-site and we changed the concept of the garden. Back then, it was mostly B.C. florals and really just herbs. Now, it’s a fully operational vegetable garden. Through trial and error, we’re now at a point where it’s exactly where I want it to be. We have more lettuces, just today we were talking about what we’re going to plant in the spring.

Is a chicken coop the next thing going up there? Are rooftop chickens a thing here in Vancouver?

It’s totally a thing. I mean, we’ve talked about it. Anyway, more to come on that. I would love to do that. Hell, I’d love to have a pig up there, for heaven’s sake! We’re all about pork here.

How do you define the term “chef”?

Well, the role is continuing to evolve so much. Someone called a chef today is not necessarily what a chef was 20, 15, or even 10 years ago. They all have their purpose, whether it’s an Anthony Bourdain or David Chang or whoever. They’ve all decided to take different routes and that’s the path they’ve chosen. But, I don’t think that just because you’ve left the kitchen and start being on television, that it makes you less of a chef, maybe just a different one.

Speaking of chefs, you are the first female chef in the history of the Fairmont company. What did that feel like?

I was super excited. I had worked my ass off to get here. I’m pretty proud of it. I’m definitely grooming my young female cooks and I want to see more women in those positions in the kitchen. I have a lot of females come through that want to work here because they’ve heard or read about me, but I’ve also had a lot of guys come through too for the same reason. Both are excited about it. I have a really strong female team here, I’ve hired more females, but at the end of the day, it has to be whoever is best for the job.

Have you noticed any growth in the presence of females in kitchen in your career?

In the past few years, I have seen a surge of females in a lot of different restaurants and hotels and it’s pretty cool to see. Females have a different way about them too, right? They can be hardcore, but they still have that side to them that adds a different dynamic in the kitchen. As far as I’m concerned, everyone should have a female in the kitchen, it balances things out.

You’re from Newfoundland, originally, and now live in the home base of the Ocean Wise movement, so how does seafood sustainability awareness differ from east to west?

I think that the focus is there, but not much as it is over here. A lot of the chefs there want it and respect it, but it just comes down to sourcing, pricing and availability, especially being on that side of the country, it doesn’t always work for them. We do have that luxury over here, but people on the East Coast really take it seriously. There are excellent restaurants going on right now over there so there’s a stronger mind for sustainability now.

The cod fishery shut down in Newfoundland and I saw so many people lose their jobs. That’s why I’m so passionate about seafood sustainability. It was a main industry. Job loss led to families going on welfare solely because of over-fishing and not thinking sustainably. It’s a lot more prominent way of thinking in the East Coast than it was before.

Looking back, what advice would you give to a 20 year old version of yourself?

To work in more restaurants. I really would. I love my job, I love how far I’ve come, I love Fairmont as a company, but I feel like the one thing I would have done differently would be to get more experience when I was younger. I tell my team this too. It’s seeing different things, whether that’s different sides of the world, a 20-seat restaurant versus a 200-seat restaurant, fine dining versus rustic. It all really expands your horizon and that’s what I didn’t do. I’ve done stages and travelled around, and looking at hotel work in the big picture. I have a great resume, but I don’t have any standalone restaurant experience. I do feel like I missed out on those experiences as a young cook. It's something that will help you become a better chef.

If I went into your kitchen right now and asked one of your cooks to describe you, what would one say?

What an excellent question! Oh, determined? Stubborn, probably! I have my hands in everything. I kind of want you to walk into the kitchen now, ask one of them and see what they would say.

Hauser's garden on the roof of The Fairmont Waterfront 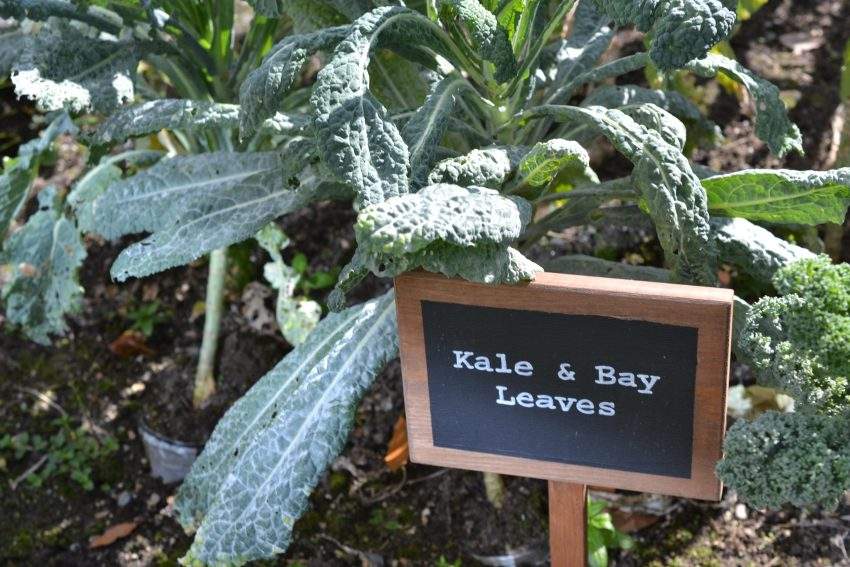 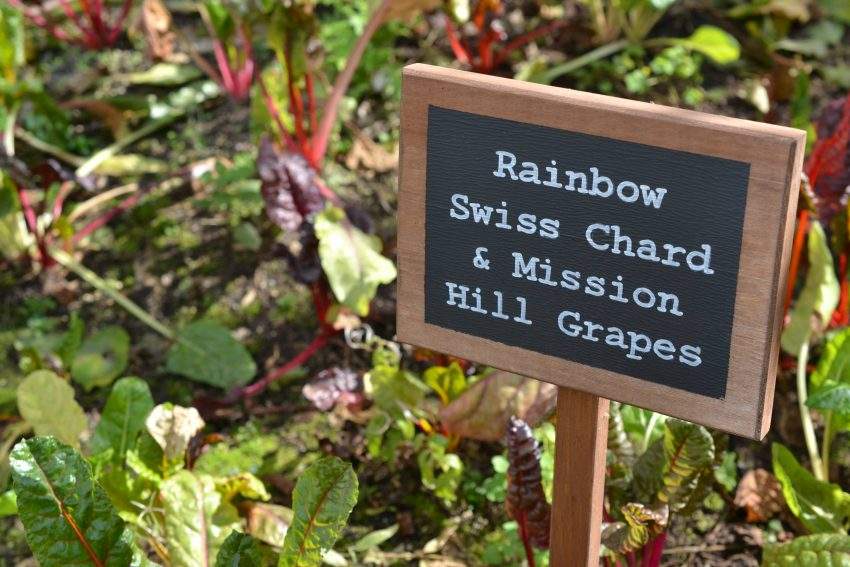 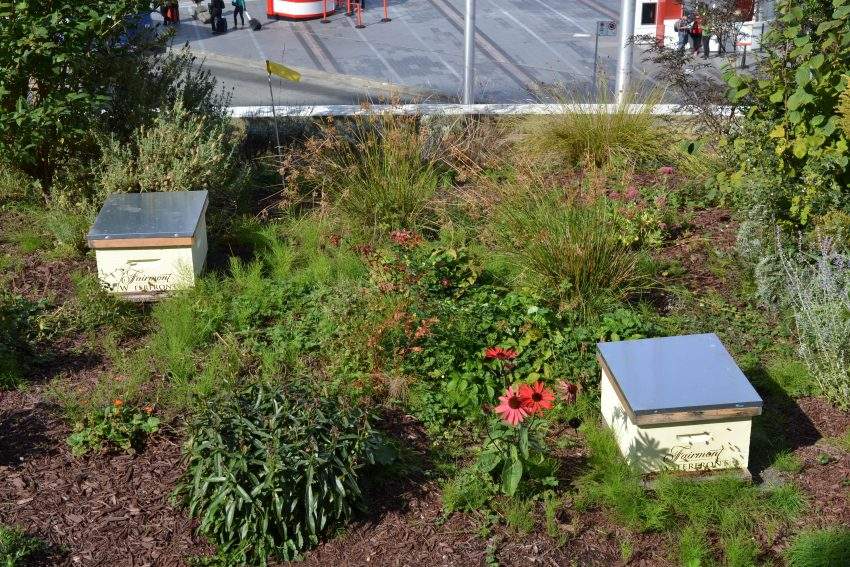 Two of the many hives on the rooftop.