Never without something to say, chef Cory Rakowski is a (charmingly) loud and proud member of Edmonton's food community. His social media feeds are filled with supportive messages about fellow chefs and restaurateurs, and his plates from North 53, one of the city's top eateries, clearly conveys his passion for supporting local farmers.

Rakowski opens up about why departing and returning to your hometown is one of the best things you can do for a food scene, how Edmontonians are banding together on the culinary front and why putting addictions issues front and centre of discussions is very important for all of us.

What would your resume look like if you handed it to me right now?

Just all over the Canadian map then?

Over the years, I bounced around a lot: Toronto, Saskatoon, Calgary, Vancouver, Osoyoos. I followed any chef or headed to any restaurant that I thought I wanted to learn from at the time. To be honest, Edmonton in the 1990s and early 2000s didn’t have a lot of options for dining, so that’s why I was travelling so much.

Your stint in Calgary was pretty brief, less than a year. Why was that?

Because I got a great offer from a restaurant up here. I loved Calgary. It’s vibrant and fun, but my position there was a little bit all over the place in terms of what it was supposed to be. It just wasn’t a fit for me. When I was offered this executive chef job back up here, it was a pretty easy decision for me.

How has the scene changed in the past five years?

This city is the kind of place that when you actually grow up here, you want to get the hell out as fast as you can when you’re young. Because of that, large portion of people in our food scene are really well-travelled. They are educated in food, culture, arts from being elsewhere and then they come back.

Wait. Why do they come back?

You know, money, family, that kind of thing, but it’s fantastic because people are bringing back their experiences from around the world and contributing that to Edmonton. So, we’re starting to see really interesting restaurants here now. North 53 is a great example of that. They’ve really hit the nail on the head by allowing their ownership team's experiences to form their food concept. It’s a very multicultural team and the food reflects that.

As the chef at North 53, what's the best part about being a key part of Edmonton's food scene?

Edmonton is experiencing this massive boom of young cooks that are striking out on their own and that is such an awesome thing to see! Just [in their] early 20s, but doing all of these cool things everywhere. That momentum is definitely going to continue, but what I’m looking forward to most is when the rest of the country takes notice of that. When everybody here that’s been busting their asses get the recognition that they deserve, this place is going to explode!

How is the food scene as a whole in terms of camaraderie?

If we stay in this central Alberta vortex, we’re never going to get anywhere. We’re also starting to see a lot more collaboration. Traditionally, this city had been very divisive and competitive, but it’s different now. It’s really started to gain collaborative traction. A lot of chefs are starting to do away with their egos and get back to working together and learning from one another. It’s less about what I can do better than the other guy, and more about what I can learn from him or her. That is an amazing shift. 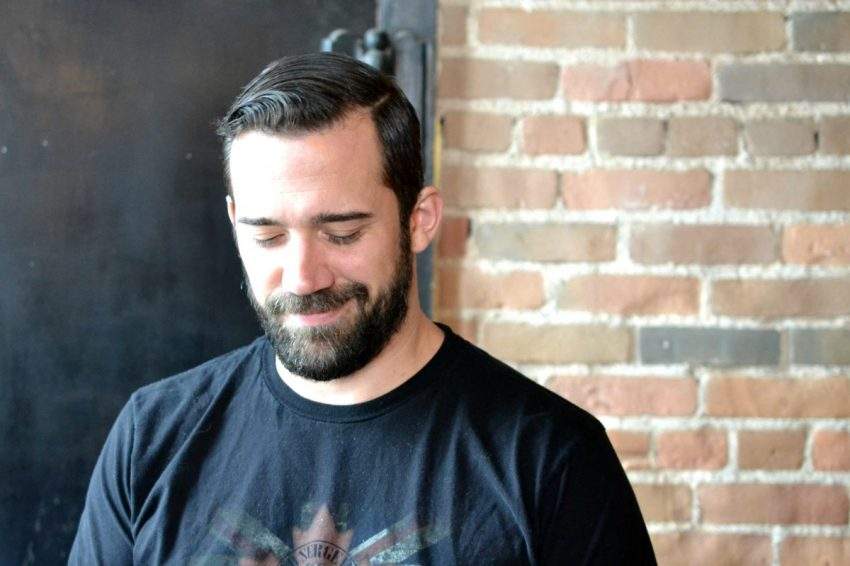 I know Edmonton actually has regular meetings with involved members of the food community--chefs, writers and producers--to, essentially, get on the same page in terms of how the city’s food and drink can be portrayed on a larger scope. I find that really interesting!

I think it’s mostly for us to figure out what we're lacking as a unified front. It's a question of how we might not be promoting ourselves well enough nationally or internationally. It can be frustrating to look at other parts of Canada and then see the attention that smaller markets with less depth in the restaurant culture are getting more attention and focus. We’re a blue collar town, man, and we bust our asses day-in and day-out. Everyone, from chefs to sommeliers to food advocates, is trying to contribute to the greater good. It’s the kind of thing that we see and feel here in Edmonton, it’s not getting the exposure elsewhere and we’re out to change that.

Who's behind this movement?

Steven Cooper and Twyla Campbell. They are food advocates, for sure, but within the industry, most people will tell you that we see them as sort of our mama and papa bears. They speak an honest truth. Always. If something isn’t good, they definitely say so and they don’t put out any fluff. On the flip side, when something is really, honestly good, they are the first two people to be right out there on the front lines promoting it. Yeah, Twyla has definitely become Edmonton’s food and restaurant mama bear!

Campbell is CBC Edmonton's restaurant reviewer and The Globe and Mail just hired on an Edmonton food critic last month. So, how do you handle criticisms? Punching a cooler door?

Ha! No way. I do have a lot of pride and it does hurt sometimes when myself or my team misses the mark, but I also go out of my way to solicit feedback from everyone in my restaurant. You can’t improve without being willing to take those criticisms. I turned a blind eye to the feedback I was receiving when I was younger. It’s really only in the past four or five years that I’ve realized the importance of it and taking it to heart. I allow it to help change the direction of where I’m going with my food. I'd like to think that I take it much better than some chefs out there. Ha, ha, ha!

You’re pretty open about your past addiction problems and there has been more and more talk about that in the media, like recently (and notably) with Ontario’s Jonathan Gushue's story this past December.

I met Jonathan a few years ago at Gold Medal Plates in Kelowna and having battled addictions personally, as well as anxiety and depression, I respect him a lot for what he did. I think that major news story was Gushue putting to rest all of those demons that he had struggled with in the past.

Do you think it makes someone more accountable when they’re publicly open about something like that?

Absolutely. My addictions flew under the radar for years and years. People didn’t know. I used to work in the kitchen high on whatever and people would just think that I had an insane work ethic and a sense of urgency that no one else there had. At that point, you are fearing for your life every day. It’s a hell of a burden to carry and, you know, I’m at a position in my career where for the first time, I’m receiving awards and attention that I’ve never received before. Previously, I never wanted to be in the limelight because of my past. The pressure that it’s put on me today, [if it was] five or 10 years ago, that would have caused a relapse, for sure.

It's never easy, but how do people become successful in not relapsing?

It needs to be you that you care about most. Personally, I want to be able to walk down the street in Edmonton with my head held high. I think that's what Gushue did. Coming out and clearing the air took an enormous amount of strength that most chefs probably don’t have. A ton of people in this industry have addiction problems, but the number that are willing to face it head on and deal with it is far, far less.

Do you think that is because it's not very noble for chefs to admit that they've faltered?

We’re a pride-driven bunch and to say that you are weak or you’re broken? That’s not really in our culture. It’s really not, and more of us need to step forward and talk about these things and that’s why I’m always willing to talk about my past. I used to be a terrible human being and I never want to go back to that. I want to be one of the people to hold the torch and say that it’s OK to talk about these types of things and move forward together. Things are never going to get better for you if you’re not willing to own up to it.

12 Acres hosts an evening of northern tastes for prairie palates

Food addiction is real—or is it?