I think I speak for most of Canada when I say that we are going to really miss Chef Matthew Sullivan on Top Chef Canada. When he started the season, the chef from Maple Leaf  Sports and Entertainment had two goals: showing that he was more than a stadium chef, and winning the title. Unfortunately, through no fault of his own, he had to pack his knives in episode five, but the chef who had won five of the six challenges definitely proved his skills rose far beyond the stadium.

The episode definitely left us with more questions than answers, so we tracked down Chef Sullivan to find out if he is over the loss, and if he has forgiven Jesse and Ross. Unfortunately because of an audio glitch the interview couldn't run in our latest podcast episode this past Monday so we transcribed it because we know you wanted to know the dirt as much as we do.

So Matt, tell me, you won five out of the six challenges, did you have a favourite challenge or dish you made?

I think my favourite dish was the grains dish, because it was really well thought out and it really spoke to the challenge a lot. It was really my style.

How did it reflect your style?

The complexity in flavours. There was a lot of fermented flavours; there were a lot of different techniques in the cooking as well. But, just because you put a lot of flavours and complexity doesn’t mean it’s going to turn out, its being able to balance the dish as a whole. I think it came out really bang on.

What made you decide to go on Top Chef Canada?

I don’t really like to define myself, as a person, as a chef, like, “Oh, you’re a chef, you’re like this or like that.” I don’t think that it defines you as a person. I like having fun with cooking and I just thought it would be a lot of fun. And I think that also the stigma of working for MLSE... to people who aren’t aware of it, who think that it’s just like cold pizza and foot long hot dogs.

You were definitely the front-runner, and probably a fan favourite, and people were very upset when they watched this week’s show. Would you go back if they did all-stars?

Yeah, I think if the timing is right with my family and work, I would love to go back. I’ve already talked to some of the people on the show about it. Even if it’s not an all-star season, but just to throw me in the mix, I think nobody would be able to say it wouldn’t be a good idea.

So, the episode that you lost was a team challenge. You did not lose a challenge, you had a really good dish, it was your teammate’s dish that they didn’t like. So, then of course, Ross’ immunity played against you there. How did you feel about losing in that way?

I mean, the show is Top Chef, so if maybe I did a better job of controlling both the courses... Having said that, I think that part of the challenge was that it had to be a cohesive meal. So, that’s why I wanted to do an appetizer and an entrée—cold, raw—versus a hot cooked meal. My dish had a lot of gochujang. It has pickled shiitakes, it had ouzo, it had heat, it had peanuts and it had puffed rice. It had a lot going on. So, we thought a more delicate tartar would have been a cohesive menu or meal. I still stick by that dish, and I guess the judges didn’t really see it the way we saw it.

So, did you try the other dishes? Did you think it was the worst dish being served there?

I didn’t have a chance. Actually, throughout the entire season, you don’t really have a chance to taste anybody else’s dishes. The judges were probably right, I guess. I’m not sure. It’s hard to say.

Well, I guess I went up against him with the grains, and that we just pulled the little shovel out, so I didn’t really choose him there. The other times that I did choose him, it was more like, there was a lot of behind-the-scenes things, and you could see his confidence, you know his pedigree, and you know Raymonds. He was very focused, he really knew what he wanted to cook and wasn’t going to stray from that and I saw him as my biggest competitor for those reasons. 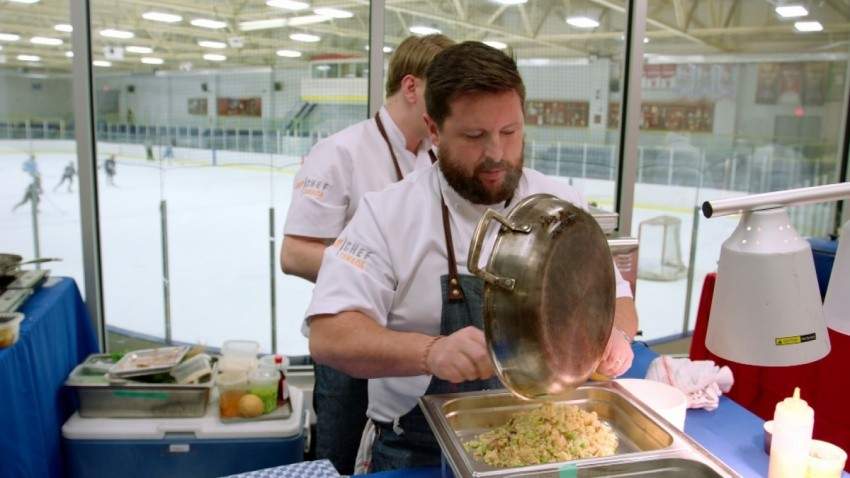 Early on, Mark Singson was very close on your tail there. Do you feel like, narratively, you set up this competition between you and Ross? Then, the two of you sitting at judges table, and he still has the immunity, did that feel like the end of the story, or how you had imagined it?

That is not how I imagined it. No. It was not how I wanted it to go down. I didn’t have a vendetta against Ross, so I didn’t want to get him kicked out. But, when I went into the competition, I didn’t want to cook any of the dishes that I’ve done before. I wanted to challenge myself. I really wanted to put everything out there, and that’s why again I thought Ross certainly had what it took for longevity [in this competition]. The way that it played out in the end, I never saw it as him kicking me out or me kicking him out, but just me putting myself against him and then levelling myself against him. How I did compared to him was more of it than letting me kick him out, or letting him kick me out.

It looked like you have great strategy and you’re a great competitor. Is that something you take with you into the kitchens?

Yes, I guess, I am very competitive too. People at work would describe my competitiveness as comedic, almost, how serious I take things. So, I really try to focus on the challenge and do as best as I could every time. Working here at MLSE [Maple Leaf Sports and Entertainment], there is a lot of strategizing that goes on, so you really have to think on your feet, and I think that helped.

What’s been the best part of being a part of Top Chef Canada?

Meeting all of the other chefs, for sure. Getting to know all of them and having new friends is great. As a chef, I don’t have many friends to begin with. It’s not like I was looking for friends, but I didn’t plan on becoming friends. Now, literally with all of them, we are all friends and it’s pretty cool.

Am I happy with the way it ended? Obviously not. I was 100 per cent devastated. I was very devastated. I think leading up to it, how I performed and how I handled myself goes back to me not defining myself as a chef. Some people really do that to the point where they cover themselves in chef tattoos—and that’s fine—but, that’s not me, I don’t define myself as a chef, I would rather be a good husband and father over being a good chef, and a good person overall, and hopefully, that’s what I portrayed more than anything.

One thing that Phil and I have talked about on our Top Chef Canada podcast is that it should be the best chef that wins. You were the best chef leading up, and now, we have to look back at the show without you. Do you feel like the show is missing something now?

So, if you were to help them design the next season of Top Chef Canada, would you design a team challenge like that, where a team member can take someone down?

No, and especially with that immunity—and I don’t mean to harp on it, but obviously I’ve been thinking about it. You think about it, and it even says that this immunity is used as a team. So, if Ross uses it, that means his team is safe. You’re probably not going to laugh at this answer, but that did not apply in restaurant wars, where technically, Ross could have just said, I want to use my immunity and his whole team would have been safe. We weren’t told that leading up to the challenge. Without giving too much away, I was a little surprised.

I don’t know, I hope that I wouldn’t have ever been in a position to need to use it, but I think Ross in the bottom for three out of the four challenges, and he didn’t use it the other two times, so I just assumed he wasn’t going to use it. But, he did. I was a little surprised. It happened so fast. Like, do you want to use your immunity? Yes. OK, Matt and Jesse, fuck off.

It did look like it was fast, but when it became clear that Ross could save Mark, Mark’s face was like. “You can’t sink me here buddy.” I don’t know if he used it to save Mark, or to save himself, or a little bit of both?

I think that’s the type of guy Ross is, he probably realized that Mark had a strong dish and he didn’t want Mark to go home, and knew he had a chance to save him. It wouldn’t be an easy position for anyone to be in.

Have you forgiven Ross?

I was never mad at Ross, never once. The following day, I woke up from a text from someone on the show, Ross didn’t have his phone and I was given my phone back. It said, “Ross wants to apologize and hopes there is no hatred.” There never was, I still talk to the guy almost on a daily basis now.

More, importantly have you forgiven me for the cold pizza and foot-long comment from my first recap?

I thought it was funny. I think one thing people should learn is to not pick fights with media. It was funny and I thought it could bring attention to the show and more viewers. It was cool.

I’m going to take that as a yes.

I was never mad. I was surprised.

Well, we make fun of Ross for never smiling.

I comment on his funky glasses. Well, we are going to watch out for that. [The blinking]