Just like he has in every challenge so far, Matthew Sullivan is dominating the opening of this week’s Top Chef Canada. The other chefs’ personalities are also starting to emerge as the show goes on, and their defenses are starting to break down as exhaustion sets in.

Matthew tells us that he is doing it all for his wife, and their baby on the way. Then, we have an obviously-staged interaction with Matthew, his nemesis-lite Ross Larkin, and recently-redeemed Nathan Guggenheimer.

In the kitchen, host Eden Grinshpan says that it is getting spicy as she unveils a table of spices. The chefs choose two mystery spices to cook with in the Quickfire challenge. JP Miron gets black sesame and chipotle, Nathan is stuck with the worst spice of all: celery seed. Ross gets turmeric and coriander, and looks characteristically grumpy about it.

Eden then reveals the twist. Not only do the chefs have to cook with the seemingly  mismatched spices, they are making dessert for her and Brandon Olsen, from La Banane and CXBO chocolates. 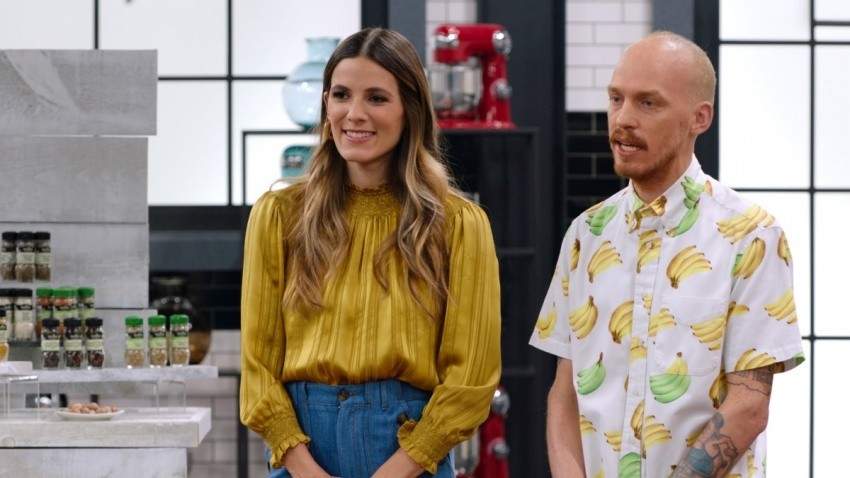 Matthew calls himself obnoxiously competitive and then turns his two fiery spices into a spicy beignet. Brandon Olsen can barely handle the heat. But it doesn’t matter, Matthew wins the challenge and the $5,000.

Jinhee wasn’t highlighted during this part of the show and I miss hearing from a female chef. We have three more episodes to go, and it is definitely a bit of a bro-fest. I hope that next season, the producers seek out more female representation, because to go through almost half the season with only one woman isn’t good enough.

Our lone female chef, Jinhee Lee, can cook, but she can’t skate. The Elimination challenge is at a local hockey arena and Jinhee straps on skates for the very first time in her life good naturedly.

The challenge is to make stadium food out of some iconic Canadian ingredients: pork, beef, lobster and salmon. Each chef draws an ingredient and the teams are set randomly. The twist is that the two chefs who are cooking each item are on a team, so the team wins and loses together.

In case you forgot, Matthew Sullivan is a chef for Maple Leaf Sports and Entertainment. I hesitate to call him a stadium chef (for reasons you know if you listen to our podcast) and he works with the Platinum Club and Real Sports Bar at the Air Canada Centre. Let’s just say that he is very comfortable with food served to hungry fans.

Jinhee is with Nathan and she is obviously not very happy to be teamed with the ousted Saskatonian. Nathan understands her reticence though, recognizing that his track record has been far from stellar. He speaks for us viewers when says that he doesn’t want to be the one that causes Jinhee to go home. Nathan either steps back and lets Jinhee take the reins or she does so naturally. She is obviously in charge of their pork dishes and #teamsweetheart seems to be doing fine.

Matthew is paired with Jesse Zuber (who hasn’t cooked anything amazing yet this season, but gets points for being funny.) They have salmon, which is a little trickier to feed to a bunch of kids and their parents. Matthew is showing his trademark confidence and tells Jesse that they are going to win the challenge, unless everyone else’s food is stellar. Matthew makes a gochujang-glazed salmon bibimbap over rice with pickles and edamame, and Jesse makes a salmon tartare with wasabi peas and caviar in a cone. (Paging 1994, your appetizer called, and I am answering because I have a soft spot for a tartare cone.) 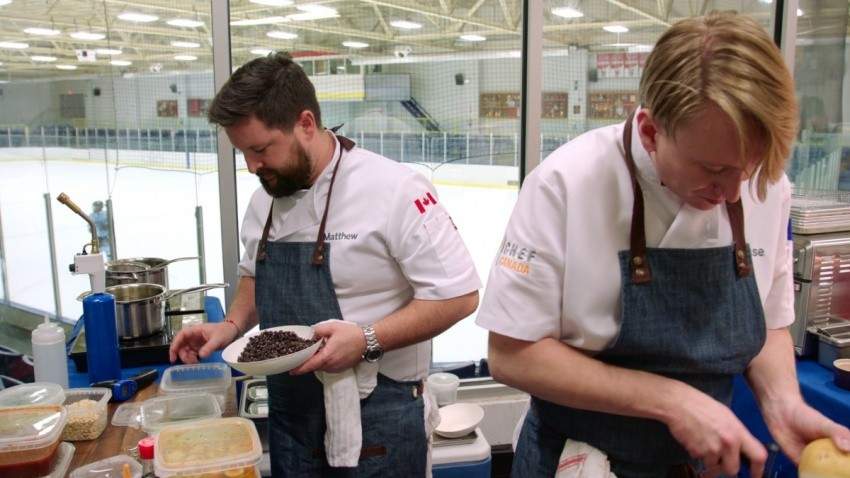 The most disparate team is Ross Larkin and Mark Singson, who hail from opposite sides of the country and have very different cooking techniques. Ross is all focus and purity, whereas Mark is Mr. foam-and-modern-techniques. They chose Atlantic lobster, which is very lucky for Ross, who seems to only want to cook with East Coast ingredients. Mark makes a potato salad with lobster chunks and a charred onion foam; Ross creates a lobster bisque. Ross acknowledges Mark’s skill, realizing that he has actual technique under his foams and frills. 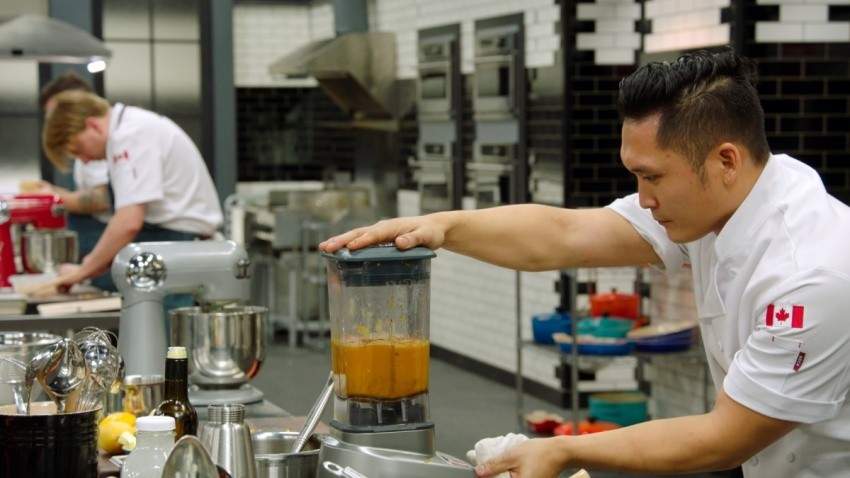 We get various shots of the hockey parents and the players eating, and cheering. And one kid eats three of Jesse’s salmon cones. 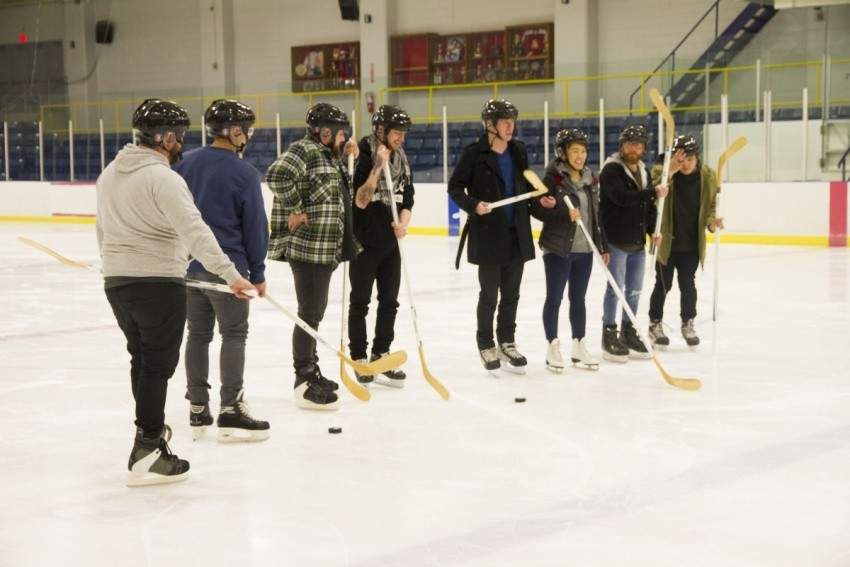 In walk the chefs in their hockey-rink best (shout-out to Eden’s giant paperclip earrings) and sidle up to the chefs’ stations. They love JP and Darren’s beef dishes, they also enjoy the pork dishes from Jinhee and Nathan. They are a little less enthusiastic about the seafood offerings. Though to be specific, they do not like Ross’s bisque because it lacks “pop”. Jesse’s salmon tartare cone was too subtle and had too much caviar. (Is there a thing as too much caviar?) I swear I saw Matthew flinch when Mark McEwan criticized Jesse’s salmon tartare. Mathew’s salmon dish was well-received, as was Mark Singson’s potato salad with lobster.

At this point in the show, the stress sets in. Is it possible that the bottom teams are Mark and Ross and/or Matthew and Jesse? I don’t have much problem saying au revoir to Ross or Jesse, but Mark and Matthew are frontrunners and they are tied to their lesser teammate’s fate.

We are back in the locker room with no one really knowing who did well or not. Eden calls in Jinhee, Nathan, Darren and JP. Since the usual winners are left in the holding area, it is unclear to the teams who has won or lost. In fact, Jinhee is already tearing up in front of the judges’ table before the first word is uttered.

But they are the winners, with Jinhee and Nathan taking home the win for the day. And the realization sets in that some of the favourites are in trouble.

The losing teams walk in to face the judges. It’s a narrative twist worthy of any soap opera. Matthew chose to make Ross a target and now they are here facing against each other with one of them heading home. Matthew could be torpedoed by his teammate’s losing dish and Ross may drag his teammate down because of his lackluster bisque. The tension is increased knowing that Ross still holds the only immunity in the game.

Judge Mark McEwan tells them that the challenge was to work as a team and the margin of error was very small.

He says that Jesse’s dish wasn’t bad but it didn’t highlight the salmon. The judges give Matthew a chance to criticize Jesse’s tartare but he supports his teammate, and his dish. Mark Singson also stands by Ross’s boring bisque, though he looks panicked.

The judges remind Ross of his immunity (as if anyone had forgotten) and say that since it is a team challenge, he can save his teammate as well as himself.

Will Ross use his immunity?

Stay tuned for the next episode for As the Apron Turns. 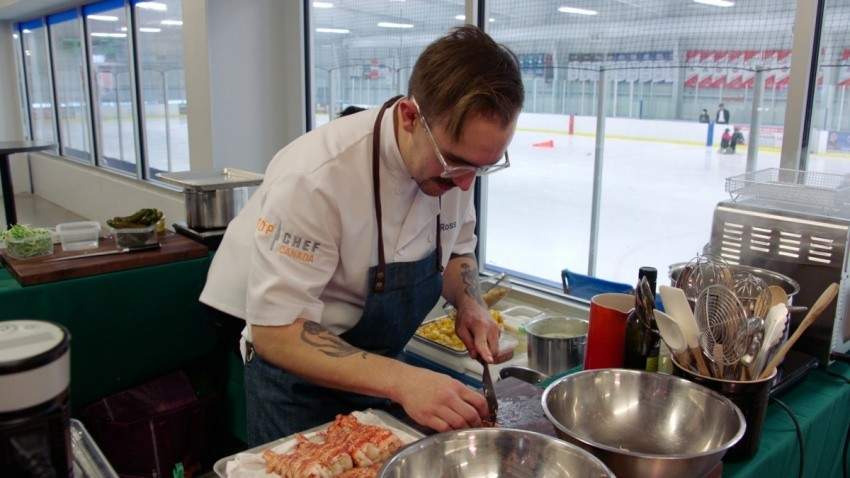 Ross looks conflicted, but he chooses to use his immunity, shielding himself and Mark from leaving the competition. This leaves only one outcome.

Matthew Sullivan, the winner of five out of six challenges, the frontrunner (and last Toronto chef) is off the show. Everyone person in the room looks shocked—including judge Mijune Pak.

Matthew, for all his competitive spirit, takes the news relatively well. He grabs a glass (or is it a bottle?), of wine, gives Nathan a cursory handshake and exits quickly.

In past seasons, we have seen chefs get angry at their elimination, even when they had made the mistake. Here, we have a chef—who executed the challenge well but had to leave because of his teammate’s error—acting like a grownup. Matthew doesn’t sulk or get angry. In his last testimonial to the camera, he says that he hopes that his pregnant wife and baby will be proud of what he did. [Cue the tears.]

Back in the locker room, Ross is looking dejected, worrying that he has made enemies out of Matthew and Jesse. He knows he is sitting there because of his immunity but says that he is happy to still be there.

But are we? I wonder what the judges and producers thought of that outcome. I’m not sure if it is good for the show to have lost one of their best cooks in this format. It would be one thing if Matthew had been ousted because of miscalculation or mistake on his own part. But to go this late in the show because of an immunity and a team member? This makes me question the structure of the team challenge. Did the chefs even know that Ross could protect his teammate as well as himself? Most importantly, can the winner of Top Chef Canada still be the best chef?

This leaves next week in a precarious position. Will everyone step up their game? Or now that Matthew is gone, will there be a slide to mediocrity?

I’m so shocked by this whole turn of events that I can barely process what happened. And I am left with only questions this week:

Was Ross’s immunity a blessing or a curse?

Would the producers ever set up a team challenge again?

Was this outcome worth the risk?

Could Matthew have done anything differently to stay in the competition?

Will Matthew forgive Ross and Jesse for his ouster?

Will we ever know the answers to these questions?

Listen to Emma and her cohost Phil Wilson discuss the unfair (?) ending of this Top Chef Canada in our latest More Than Maple Syrup podcast episode here.