People often associate the military with shooting guns, living in trenches, getting fit, getting yelled at for the smallest things, and more importantly, terrible food. Those assumptions are correct… to some extent. Yes, it is true that everyone undergoes basic training and is infantry to some degree, but the reality is that infantry is only 10 per cent of the whole army; the rest is support. The main support out there is the logistics branch (or known as the Royal Canadian Logistics Service). Within it are the cooks. I’ve been in the Canadian Armed Forces Primary Reserves for more than a year as a cook and let me tell you, it is quite an experience.

Being a cook in the military is like being a cook in the civilian world; the only difference is the environment you work in. As an army cook, I get to work in a regular commercial kitchen when I’m on base or I’ll cook in a kitchen trailer in the middle of nowhere. Sometimes, I get to work at a navy ship or at an air base so the travel opportunities are endless. Everyone eats and food is a major morale booster for the troops, especially in the army. I’ve experienced it at both ends of the stick and having a nice hot meal after a long, and sometimes miserable, day out in the field is very satisfying. Imagine the looks on the troop’s faces when they smell chicken noodle soup at a little box called a mobile kitchen trailer (or MKT) in the pouring rain or a snowstorm.

We are an underrated trade in the military, and like most trades, we are made fun of, especially if you’re an army reserves cook. Because reservists train one night a week, and a weekend a month for an exercise, we don’t get to do our trade until those weekend exercises. Sometimes, we don’t even get to cook in said exercises; instead, we get catered food, boxed lunches or IMPs (individual meal packs). To put it lightly, the quality of the catered food is interesting.

If you ask anyone who is in the military if they would rather eat catered food and boxed lunches or McDonald’s, the majority would say that they are willing to travel 25 km to the nearest McDonald’s to avoid the food. What does that say about our military’s diet? Yes, it is calorie heavy, but the quality degrades, especially those powdered eggs and questionable pancakes. That’s why when the cooks come to the field, we are praised. 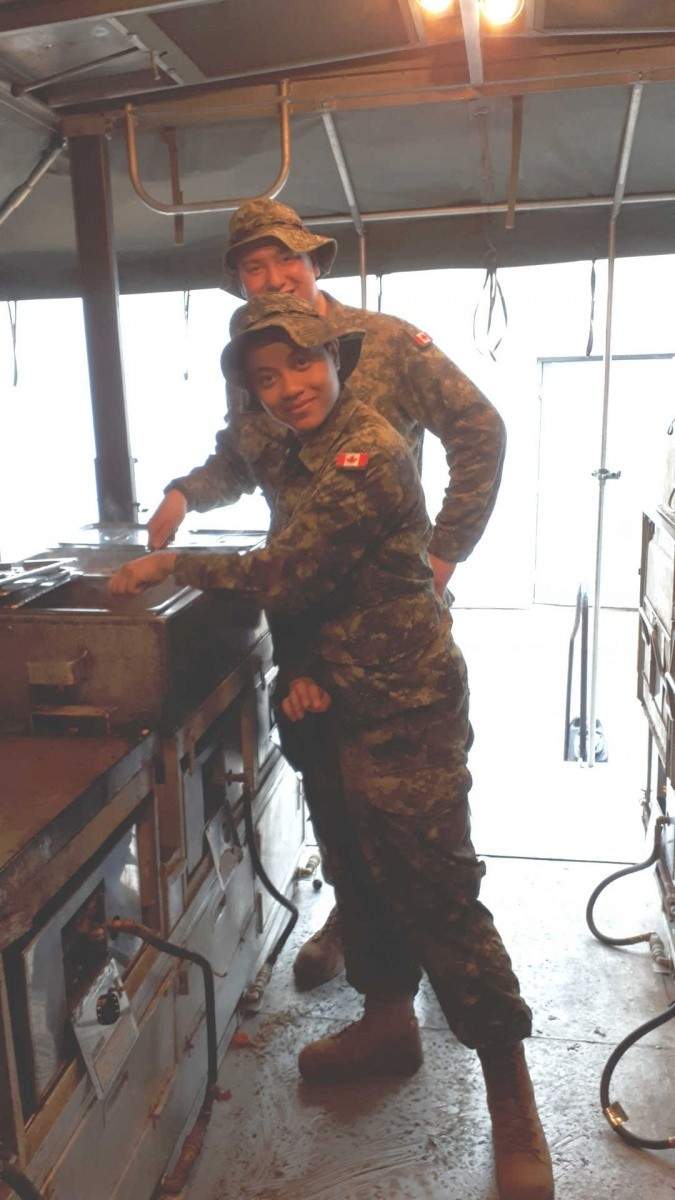 At a training exercise, I was cooking for 100 troops with two other cooks and my supervisor. It was cold, it snowed for a bit (thanks Canadian spring) and I was sleep deprived. We were in the MKT and cooking breakfast. At least five infantry soldiers kept asking us why we can’t cook in all of the training exercises instead of getting catered food. The answer was simple: we don’t have enough cooks. Out of the whole military; both regular and reserve force and the combination of the three branches: Army, Navy and Air Force there are approximately 500 cooks out of 126,500 members. A whole battalion to feed the military, that’s a prime example of chaos theory in action.

Just like any other cooks in the culinary industry, we get constant pressure from our supervisor, as well as other higher ranks and other troops. Timing is crucial in the military; if you miss a single timing, the subsequent ones will be backtracked and potentially, the whole plan may be delayed for hours. Being a private (even worse, a “no-hook private” or an untrained private), telling a master corporal or anyone who is higher than you that the food is not ready as you reach the timing can be intimidating, especially if your supervisor is there questioning why that is. Yes, they will understand that the food needs to be prepared properly for food safety reasons, but at the same time, there are timings that need to be met and can be very sensitive otherwise. After all, the other troops are like customers in a restaurant; they have other things to do and some can be impatient.

The training itself is what you would expect in culinary school; going back to the basics. From holding a knife, cooking endless number of eggs, baking, learning how to do different vegetable cuts; you name it. From the reserves perspective, our training is three months long at CFB Borden, located an hour and a half north of Toronto. We stay in dorm-style barracks with our issued whites, the standard at the time. To distinguish between the three elements, our nametags have a symbol of each branch: two swords crossing is Army, anchor is Navy and eagle is Air Force. But, in the end, we are equipped to cook in all three elements with some mild modifications in the army side. Just like any other courses, it has its ups and downs but overall, it is a great time minus the early wake-up calls and long days.

The life of a military cook has its perks and its downfalls, just like any other cooking job. Sure, we don’t get to practice cool techniques like molecular gastronomy or avant-garde cuisine but we are still appreciated. Also, I can definitely call myself a combat cook because the most important thing for anyone in the military is that regardless of what trade you are, you’re soldier first. I still need to know how to shoot a rifle and a machine gun, throw grenades, navigation and other soldier stuff. After all, you can be the best at your trade but if you can’t defend yourself in the field, then you’re as useful as a new recruit.

Cooking is fundamental: Mise en place is not just for chefs

One day in London, Ont.: CTV's The Launch winner Poesy

10 New songs by Canadian artists to add to your kitchen playlist - August 14, 2020 edition