Only a few years ago Christine Blais didn’t even know what bean-to-bar chocolate was, let alone have aspirations to produce it herself. Fast forward to 2016 and she can’t make her handmade, single origin bars fast enough to keep up with the demand.

When asked how she got into making chocolate, she responds simply, “Feminine curiosity.” With a previous career in industrial design and architecture, she knew she wanted to work with her hands.

“I didn’t want to be on a computer all day,” Blais states matter-of-factly. But bean-to-bar chocolate production wasn’t an obvious choice either. Prior to purchasing some equipment in 2013, she had never made chocolate before in her life.

Architecture and chocolate may not seem like an obvious pairing, but it was while looking at a design blog that she stumbled upon an article featuring a beautiful kitchen and handmade machinery that she later learned was used to make bean-to-bar chocolate. A Google search ensued, and then another. From there, the conceptualization of Palette de Bine began.

“I like to compare chocolate to a good foundation in architecture,” Blais says, “Cement is just sand and water. Similarly with chocolate, you can build a good product with only two ingredients: cocoa beans and sugar.”

Blais began her chocolate venture the only way she knew how, by putting both hands in and going for it. “You have to make mistakes to learn,” she says. After connecting with established craft chocolate producers like Dandelion in San Francisco and learning by watching and asking questions, she made her first batch in the fall of 2013. By Christmastime, she had made about 100 bars and was sharing her creations with friends and family who couldn’t get enough. “In the beginning, I would only temper one pound of chocolate at a time,” she laughs. Realizing that her newfound hobby had the potential to be more than just that, she found a production facility in the back room of her friend’s furniture shop and started selling her bars at local farmers’ markets in the Mont Tremblant area. Nowadays, she supplies boutique shops, restaurants, and other businesses across Canada and the States. The most impressive part? She still makes all of her chocolate herself, by hand. 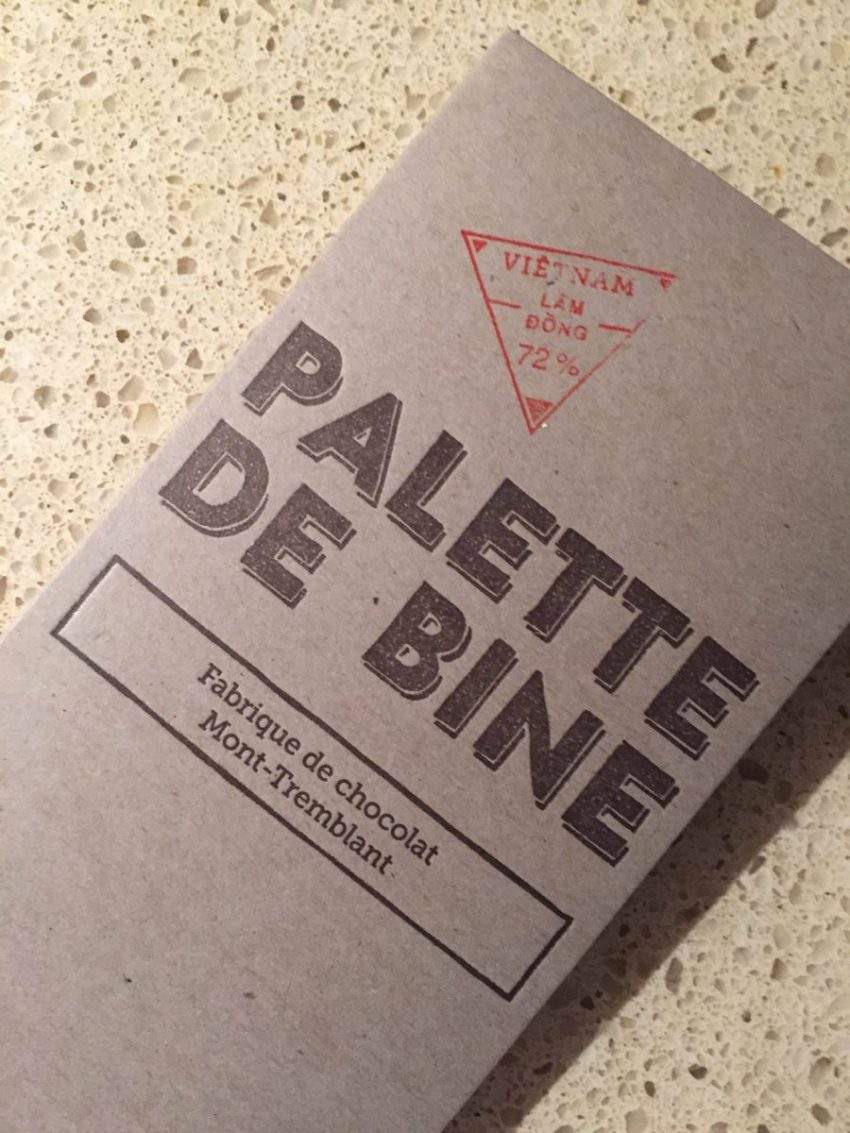 “All of the beans have a story,” Blais explains, adding, “ I need to be 100 per cent confident where they come from and that they are ethical.”

Take her single origin bar from Belize as an example. The cocoa beans used to make it come from a co-op called Maya Mountain Cacao, which works directly with farmers to supply craft chocolate makers. Collaborating with farmers also allows her and other chocolate makers to provide feedback on the beans that go into making their finished products. “We can go back to the farmers and get them to work with fermentation levels and other variables, to better control aspects like acidity,” she says. Hand-picking her beans, Blais opts for fruitier varieties because as with all food, taste is subjective, and she prefers that flavour profile. Each origin still has its own, subtle nuances though, ranging from notes of Swedish raspberries, to nutty and smoky undertones. Don’t ask her to pick a favourite. “That’s like asking which of your kids is your favourite!” she jokes.

Small batch bean-to-bar chocolate isn’t without its challenges. Beans can get damaged in transportation and crops can fail, preventing her from sourcing all of the different origins she would like at any given time. Also, because there is no added cocoa butter in Blais’ chocolate, it can be especially temperamental to work with. The small nature of Palette de Bine’s operation means that not only is she making the chocolate, she’s also fixing machines, packaging shipments, marketing, and doing all of the other tasks required to keep a business running.

Blais admits she is very picky when it comes to her bars, but it is that exactitude that won her acclaim at the 2015 International Chocolate Awards within only a couple years of entering the world of bean-to-bar chocolate. Despite her success, she doesn’t have any plans to aggressively expand in the near future. “I love to keep each of the bars in my hands,” she states. “People ask me what my plans are going forward and I just want to keep having fun.”