Habeeb Salloum is an inspiration, not just for immigrants starting new lives in Canada, but for all Canadians, for his persistence, dedication, and acceptance. Since immigrating to Canada in the 1920s, he hasn’t stopped embracing and sharing his Syrian heritage. Even at 93 years old, he’s still writing recipes and stories, many of which can be found in his newly updated Arab Cooking on a Prairie Homestead. We chatted with Salloum to learn more about the book and what he wants Canadians to take away from it. 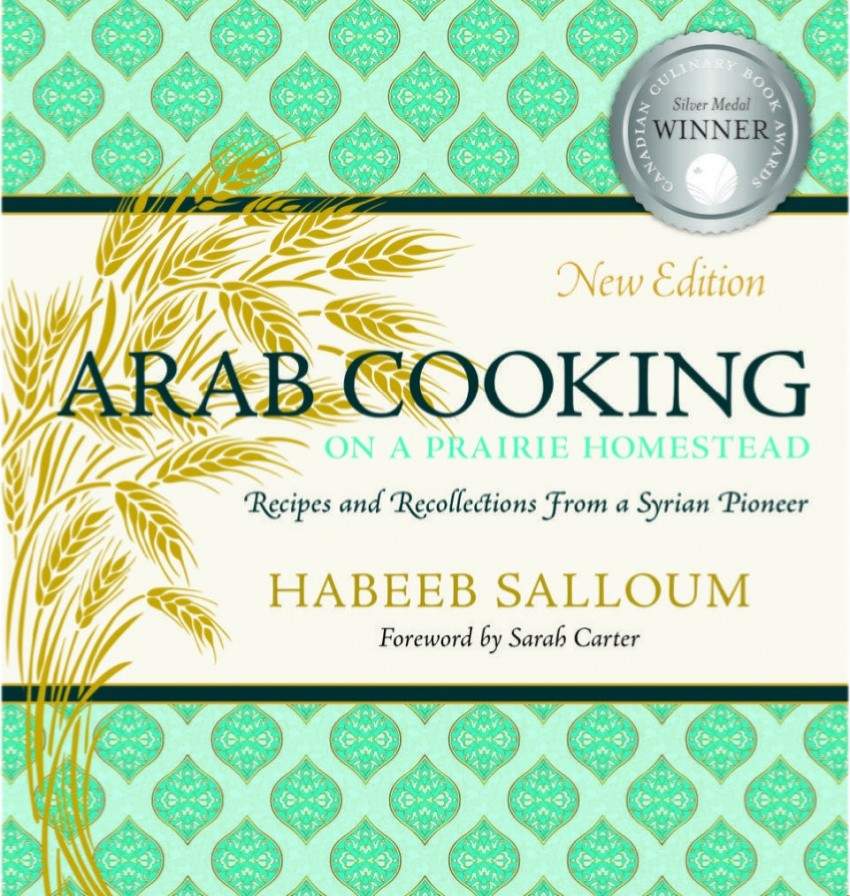 What do you think Canadians’ current perception of Syrian food is? Do you think this has or is changing with the recent influx of Syrian immigrants? If so, how?

Knowledge about Syrian food in Canada was virtually non-existent when I was a child. However, with the first immigration of Syrians to Canada in the 1890s and the first, second, third and fourth generations in Canada, the perception of Syrian food began to gradually spread. Yet, it wasn’t until the internet [came along] that people became exposed to Syrian recipes and the food became more well known. Over the last year, knowledge about Syrian food has increased drastically with newly arrived immigrants opening up eateries and offering their foods at festivals.

Although most Canadians are very familiar with Lebanese food, it is actually the same as Syrian food in that both countries were once one nation until divided by Britain and France at the end of the First World War. What is identified as Lebanese is correct (such as tabbouleh, baba ghannouj, hummus, shish kebab, falafel and the like), but it is also Syrian. However, Syrians have a very long culinary tradition, which I regret to say, has been near forgotten by most Syrians themselves. The idea of what “Syrian” food is goes hand in hand with, “Who are the Syrians?” Syrians include an array of religious and ethnic groups who have all contributed to the development of Syrian cuisine. This is what makes Syrian cuisine truly Syrian.

What differentiates Syrian cuisine from other Middle Eastern cuisines? Are there specific ingredients or techniques that define it?

Syria has always been a country of wheat culture. Various grains are embedded in the country’s cuisine. Burghul (bulgur), kishk, and freekeh, are basic staples in the Syrian diet. Pomegranates, prolific throughout parts of Syria, are also essential to many Syrian meat and vegetarian dishes. From these, a pomegranate concentrate (dibs rumman) is indispensable to the kitchen cabinet. As for cooking techniques, in reality, they do not differ from other surrounding Arab countries. Spices and other condiments differ according to location and the development of different tastes per region. Syria was once the western terminal of the Silk Road, allowing it the advantage of being introduced to new foods and ingredients on an ongoing basis.

What is your mandate behind the book? Who is it geared towards, and why?

I wrote the book to inform people about an unrecognized, even virtually unknown, yet important ethnic group who were part and parcel of Canada’s development. The history that my family experienced in Saskatchewan is a good example of what Syrians faced when they settled in Canada in the early 1920s and how they overcame obstacles that stymied so many others. I also felt it necessary to explain how we survived the hell of the dirty 30s by using “old country” methods in a new country. The Syrian foods that we ate need to be recorded for posterity, as this is a story of survival in an almost barren and inhospitable environment. Culinary and social traditions from Syria remained with my parents when they settled in Canada and they could never break away from them. They passed these onto their children and thereafter their children’s children, and their food was their link to the “old country”.

My story is geared towards Canadians in general, especially those who need to understand that this nation was built by immigrants who suffered, celebrated, ate, and worked to create better lives for their progeny. The Syrians were just as equal as anyone else and their story needs to be told.

What do you want people to take away from reading it and cooking from it?

Through millennia, Syrians have mixed with others through trade, settlement, treaties, and war; built cities, pursued all facets of intellectual learning, and have created a culinary treasure house of healthy, delicious, and affordable dishes that can match any other of the world’s great cuisines. The recipes that I have included in my book have been passed down through generations in my family, and these were the healthy foods that helped us survive. Lentils and chickpeas are now some of Canada’s main agricultural exports and it is these pulses that are identifiably Syrian. Basic ingredients such as yogurt, burghul, chickpeas, tahini, and even dandelion, all inexpensive staples of the Syrian diet, have become the source of some of the most glamorous dishes in both Syria and Canada. Through the years of my life in Canada, I have seen a revolution in the acceptance of “foreigners’ foods”. Thus, my story is a lesson in history of how the world can change in accepting new people and new ideas in a positive way.

Canada is known for its pulses. How does this play into or facilitate cooking Syrian food in our country?

Canada is indeed one of the world’s largest exporters of lentils and chickpeas. Every Canadian should have the advantage of being exposed to the healthy foods of Syria, as these Syrian dishes are in most cases, based upon these pulses. My book provides recipes that are simple to prepare, using inexpensive pulses that are all readily available throughout Canada.

Do you worry that Syrian food will lose authenticity as it becomes more and more popularized in Canada?

Absolutely not. Syrian food will always remain authentic as the world now is so much more accessible. All the ingredients for Syrian cooking that my parents could not find in Saskatchewan are now available in almost every supermarket across Canada or even by ordering them on the internet. Their availability facilitates the preservation of Syrian culinary heritage. Children of Syrian immigrants are a good example of this; I’m speaking of even fifth generation Syrians in Canada and the U.S. who have lost all connection with their land of origin. Yet they continue to cherish their Syrian foods as these recipes continue to be passed down.

What’s your favourite recipe in the book and why?

I would say that my favourite recipe is the dish mujaddara. Once you try it, you will understand why, in the Bible, we learn of Esau giving up his birthright to his twin brother Jacob for a bowl of lentil pottage, which all Syrians believe was actually mujaddara. Its delicate taste and earthy texture (made with lentils and rice) served alongside crunchy, tart, pickled turnips and a dish of cold yogurt is a gourmet meal in itself. This is one of the best examples of a very inexpensive dish that is worth its weight in gold.

Writing a cookbook at 81 years old is impressive to begin with, but updating it at 93 is outstanding. What motivates you to keep working and sharing your experiences?

Age means nothing when the mind is active. My favourite hobby is writing. When an idea comes to me, many times in the middle of the night, I wake up and go to my office and start to write. I feel like a million dollars when I have a topic about which I feel people would enjoy reading. Others might want to watch hockey or a ball game, but I feel elated when I write a verse of poetry, or an article about history or food, or create a recipe. I have a passion which makes me continue to work as a writer, author, and traveller. I just can’t stop.

Canadian food DYK: Saskatchewan is the largest exporter of lentils

Eat North Answers: What is a pulse?