With a solid culinary foundation, years of serving as permanent judge on Bravo's Top Chef, and a new cookbook, Gail Simmons is nothing short of a culinary powerhouse, and we couldn't be more proud of this Canuck.

Born in Toronto and educated at McGill in Montreal, she then went on to attend cooking school, ultimately landing a judging spot on the Emmy-winningTop Chef, which has pretty much made her a household name. Now, having compiled 20 years of incredible experience in food and travel, Simmons has written her first cookbook, Bringing It Home: Favorite Recipes from a Life of Adventurous Eating, which is hitting shelves Tuesday, October 24. It’s a book designed for the home cook, while integrating fundamentals learned from professional kitchens, working with the culinary industry’s hottest talent, and a lifetime of other food and travel experiences. We chatted with Simmons to learn what she wants readers to derive from her book, and how being Canadian has shaped her trajectory in food. 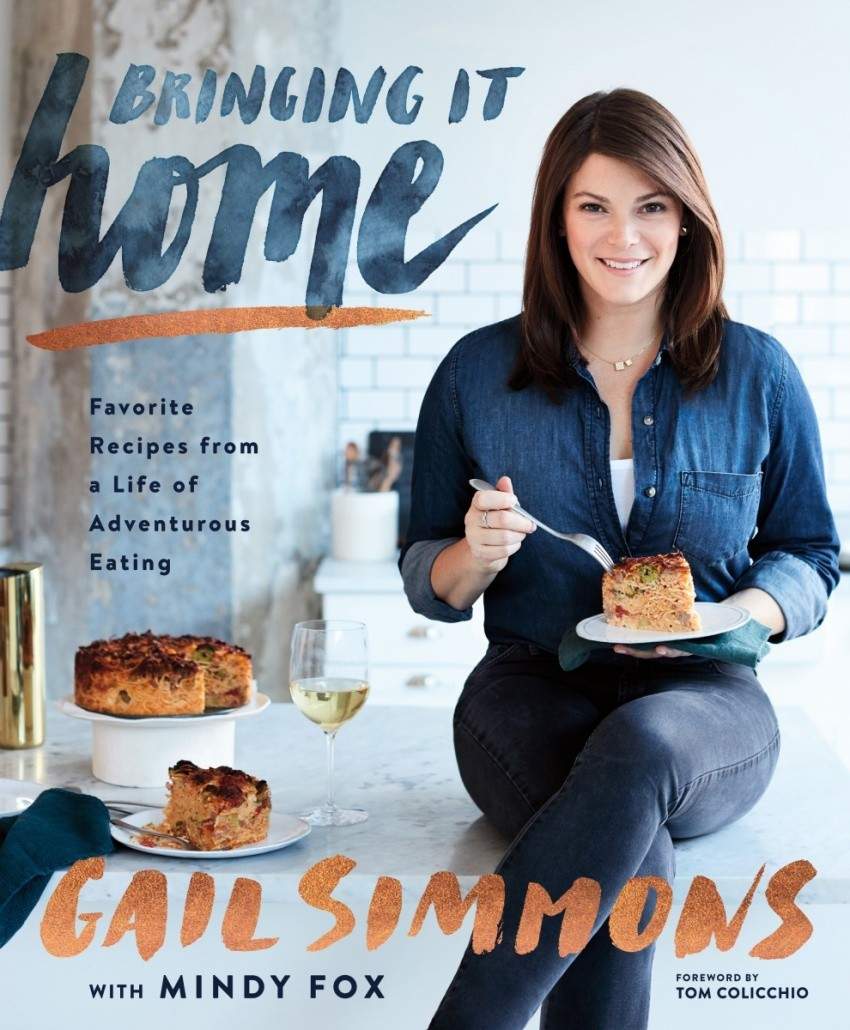 Can you tell me a bit about the book and what inspired you to write it?

I’ve worked in the restaurant industry in all different forms for 20 years: as a cook, bartender, media, you name it. I’ve had amazing experiences, being able to play many different roles and work with so many people, plus travelling around the world, eating and cooking. There was a long time where I didn’t want to write a cookbook. I wrote Talking with my Mouth Full in 2012, but it was more of a memoir of all of my food experiences. Five years later, I realized I’d been collecting notes from all the people I’ve worked with and places I’d travelled, and I had all these recipes compiled to write a book with.

Was it difficult to take inspiration from chefs and your experiences and translate that into recipes for home cooks?

All my recipes, they all started out for the home cook. I’ve taken tricks and flavour combinations that inspired each recipe, and then changed them and made them my own. It was never about taking someone else’s recipe and making it. They’re all my recipes. I want people to cook from this book. I don’t want them to be intimidated by the process. I’ve had a lot of chef training, so I’ve learned how to explain and demystify the process. Actually, there’s a whole chapter on “chef lessons worth bringing home”, made up of the foundations I learned as a professional.

Can you give an example of some of these lessons?

There are lessons like learning the general way to approach a recipe; every step, there’s a way to do it to get the most out of an experience. Organization, mise en place, learning how to season properly, how to work as a team and learning when to ask for help—they’re all integral. Choosing a recipe based on time of year, or the time you have in a day, adapting and thinking on your feet—it’s always a quickfire challenge. People always tell me that the challenges on Top Chef are not applicable. Chefs never have to cook from a vending machine. Yes, they’re obviously contrived, but every one teaches a lesson: managing time, thinking spontaneously. It’s about learning to think about cooking, not just executing a recipe.

Are there any recipes inspired by Canadian chefs or experiences?

There’s lots of Canadian content, or Can-con as they say, not because it was mandated {laughs} but because I spent the first 20 years of my life in Canada. So, the book isn’t just about lessons from chefs, but lessons from family, my travel as a child, and holidays I spent with my family. One of my favourite Canadian recipes and one of my favourites in general is tarte au sucre. Somehow, it hasn't made its way south of the border. It’s made at every sugar shack in Quebec every sugaring season, but no one in America knows what it is. I updated the recipe, making the crust with hazelnuts, but still finish it off by pouring cream on top when presenting it tableside. The first time I made it, I served it to Marcus Samuelsson and he ate half of the pie. You just can’t stop.

Where are your favourite places to eat in Canada?

I’m from Toronto and my husband is from Montreal so we spend most of our time in those two cities. We get to Vancouver occasionally too, but not too much in between. I went to McGill so there’s a long list of places I love to eat in Montreal: Arthurs Nosh Bar, classic places like L’Express, Joe Beef, Wilensky’s, and all the other old school delis. Also, Jean Talon is the best market in North America. Union Square farmers’ market here in New York is amazing, but Jean Talon is another level; so many Quebec specialty products, it’s just beautiful.

How did writing restaurant reviews for the McGill Tribune start your career in food?

That was it; that was the moment. I was in my last year and noticed that the McGill Trib didn’t have a restaurant critic. I didn’t have training; I was 21. It was an excuse to explore the city through food. Montreal is such an interesting city in terms of immigration. You have all these other places that have French influence—Portuguese, South American, Thai—that come together to create a very cosmopolitan city. When you’re a student, you need to eat cheaply so it was an adventure getting to explore the city.

What was one of your favourite finds?

One of my favourite restaurants in the world is Damas. They’re pretty well known now, but the first time I went, no one knew about it. I read Lesley Chesterman’s review, decided to check it out, and was just blown away. At the time, I thought we had good Middle Eastern food in New York, but it was incredible.

What do you think sets Canada’s food scene apart from other countries, especially our neighbours to the south?

Right now, pretty much everything. [Laughs.] I’ve never been more proud to be a Canadian. Because of our leadership, our open-mindedness. I’ve lived in New York a long time and I’m a New Yorker, but I’m not an American. People have a lot of clichés about what it means to be Canadian and so many of them are true. I think our natural resources create a mentality of outdoorsmanship that’s fostered from a very early age. I spent my summers up in Algonquin Park, canoe tripping and camping. It’s a culture of the outdoors that’s ingrained in us. My brothers played hockey so I spent every Saturday morning freezing in the winter inside the rink and smelling gross hockey equipment. Then, on Sunday, we would head up north to ski. It never leaves me. So many cooks in Canada are pushing Canadian ingredients. I’d say that there’s a larger awareness of native and indigenous foods and culture; we’re not perfect, but it’s a stronger Indigenous presence [than in the States]. We’re faster to recognize and appreciate it. Canadians’ respect for the environment, and stewardship very much contribute to the food scene.

I’m sure you get asked this all the time, but what Canadian food do you miss, being in the U.S.?

My cupboards are packed with Canadian things. Maple syrup, I only buy it in Canada. Coffee crisp, I swear to god, I have two in my pantry right now. Sortilege, the maple whisky, I always buy it at duty-free to give as gifts. Butter tarts—people here don’t know what they are, so I always explain them as pecan pie without the pecans. And I miss potato chips. We have better potato chips in Canada. All dressed just came to States. I find them occasionally and they’ve got a big maple leaf stamped on the bag.