It was at Amuse, an event in March held to showcase the area’s best food and drink, that I noticed a shift in Kelowna’s culinary scene. More than 50 restaurants, distilleries, wineries, cideries and breweries featured their products in a food and drink pairing extravaganza that entertained and fed 500 guests in the Centre for Learning at Okanagan College. I was one of three judges tasked with tasting and scoring the entries.

Guffaw if you will, but our jobs were not easy. The level of food execution and the quality of the drinks were unbelievably and surprisingly good.

50th Parallel Winery and its restaurant, Block One, took top honours in three categories. It shows what’s happening in Lake Country where five out of the eight wineries operate top notch restaurants; two of them (Block One, and the Garden Bistro at The Chase Wines) opened just this year. Both are housed in stunning buildings and both adhere to the ideology of using seasonal, locally sourced ingredients.

If I had to wrap up the Kelowna food scene in one sentence, it would be all about the feels: the food coming out of newly opened kitchens is thoughtful and compelling, and the people who make it are doing it for the right reasons. They want to feed you food that makes you feel good. 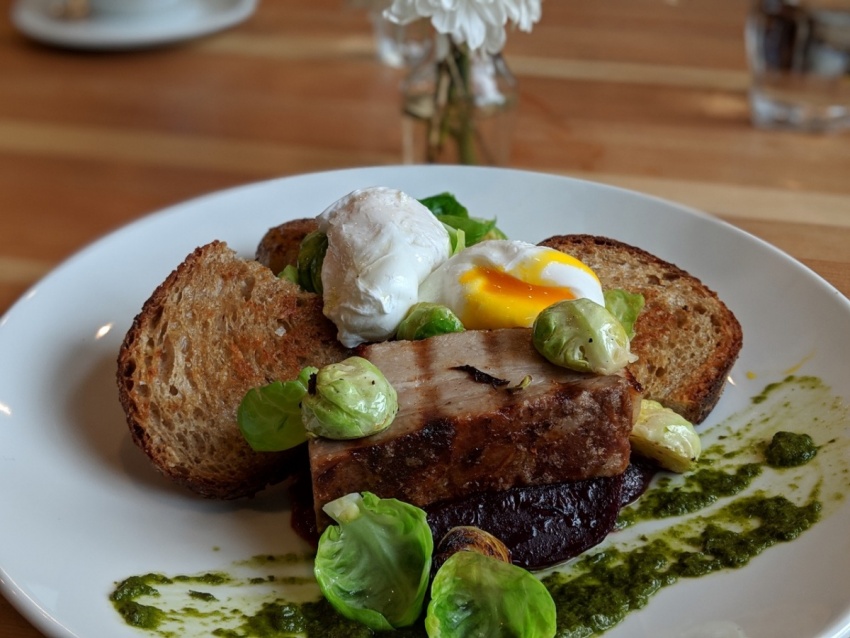 That’s exactly the approach taken by Kelowna restaurant pioneer Mark Filatow. This Okanagan chef opened Waterfront Café and Catering on Abbott Street in the waning weeks of 2017, making him miss the boat on “best of” lists like this. So, take note and grab a table. Every year, Filatow wins awards and recognition for Waterfront Wines for good reason. The café, although more casual, should garner the same respect because the food is of equal quality, which is to say, spectacular.

Speaking of pioneers, Audrey Surrao and Rod Butters, the duo behind Raudz, Micro and Terrafina (at Hester Creek Winery in Oliver) opened a much needed breakfast spot called Sunny’s Modern Diner. After all that liquid consumption, you’re going to need a big plate of whatever they’re serving at Sunny’s the next morning to set you straight. Pro tip: the breakfast poutine with fries (or hashbrowns), cheese curds, beef brisket, fried egg and hollandaise is a lifesaver. 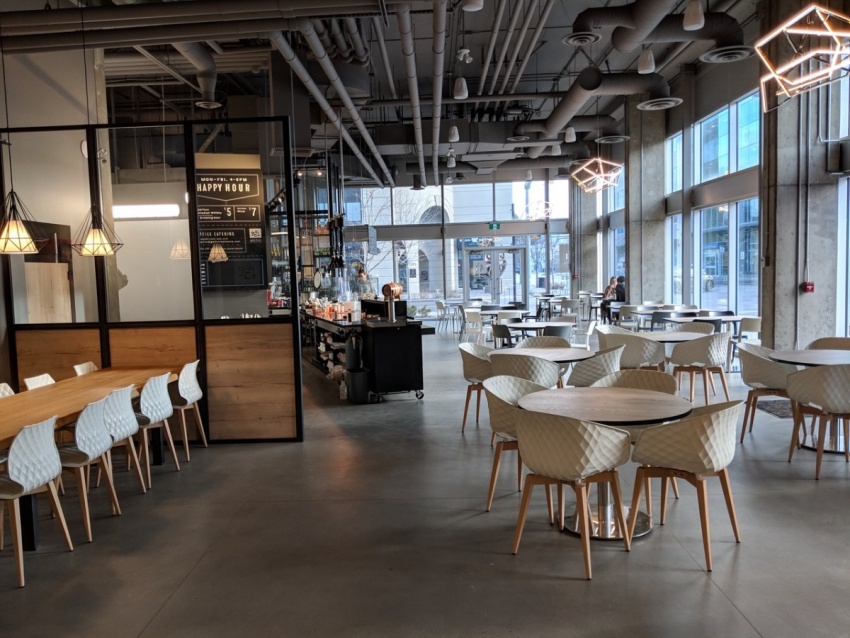 The Coccaro family (of La Bussola, The Curious, and the rooftop café, Perch) opened Gather in the late summer of 2018. I’m still struggling with the concept. The space is top-to-bottom concrete, wood and stainless steel with cool lighting and modernist chairs de rigueur of new venues—the end result being sort of Oslo-in-the-Okanagan, but the menu features Italian and Korean food…yet for some reason, it works. Both the (very non-Korean) salmon poke bowl and the gnocchi fritti are standouts. Drinks consist of coffee, fresh squeezed juice, kombucha, and 10 whiskeys from around the world. Perhaps bourbon and bibimbap are a pairing that I’m not yet aware of. 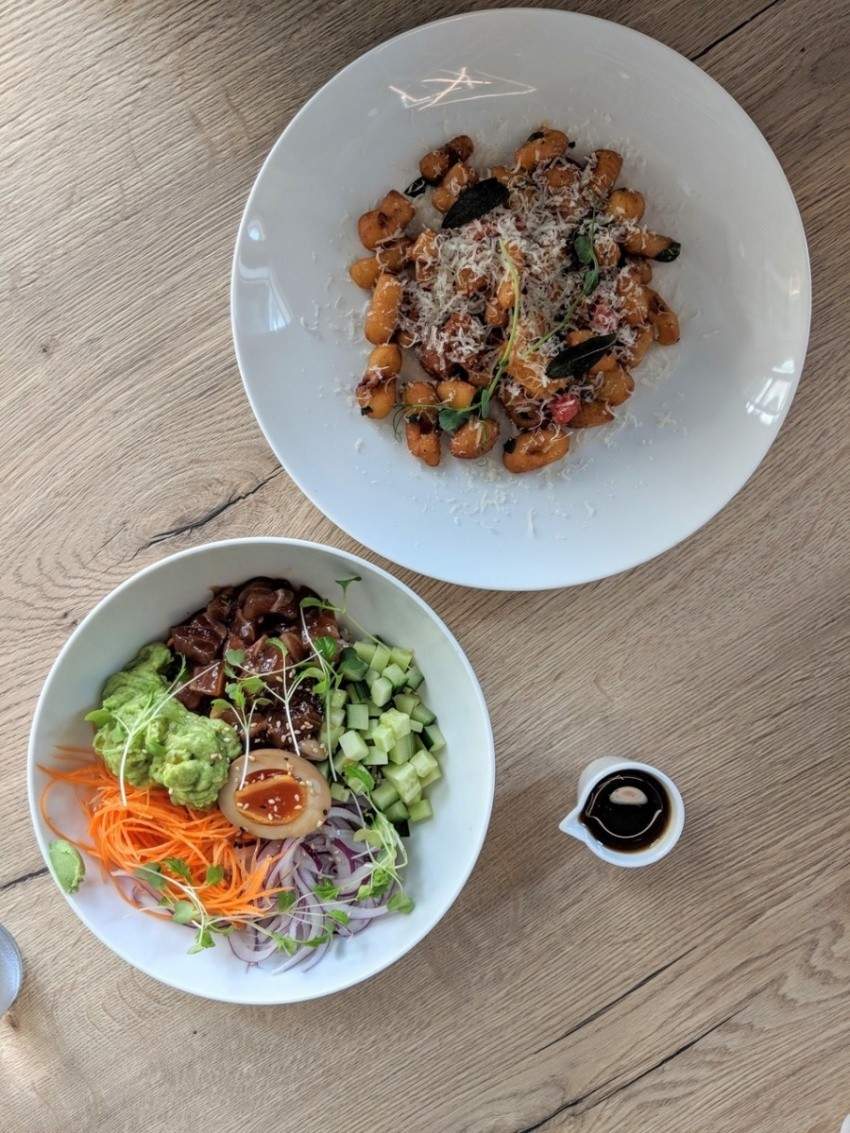 A few blocks over, near Prospera Place, you’ll have no trouble with the concept behind Sprout, an organic bakery and specialty shop on Cannery Lane. I wouldn’t normally order just toast and jam for breakfast, but at Sprout, this is no ordinary toast; this is robust bread, deep and rich in flavour with serious chew and heft. That simplistic approach also speaks for the décor, which is a bit of prairie school classroom-meets Swedish farmhouse interior. Sprout is a place you don’t want to leave. 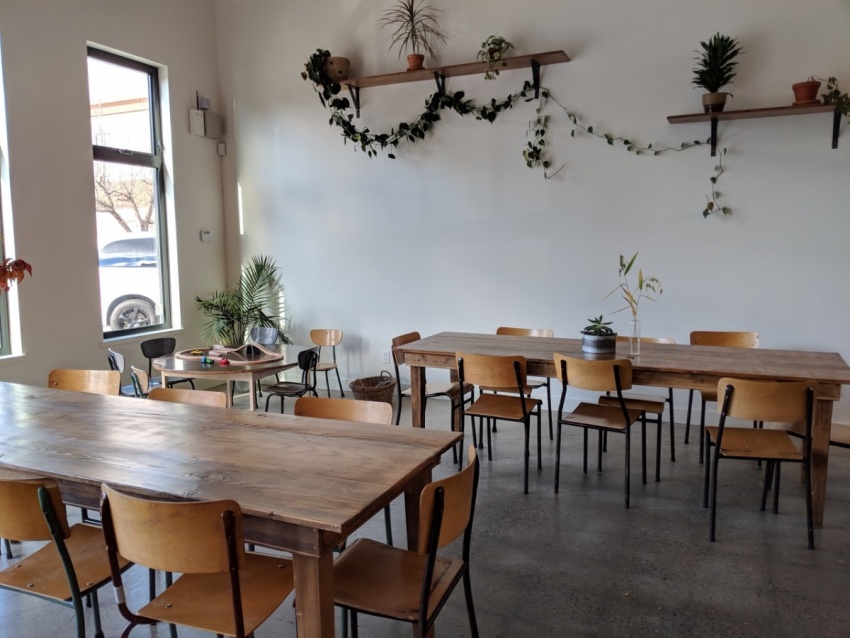 Local sourcing of quality ingredients is at the crux of Kelowna’s burgeoning food scene—as it should be in this fertile, verdant valley. 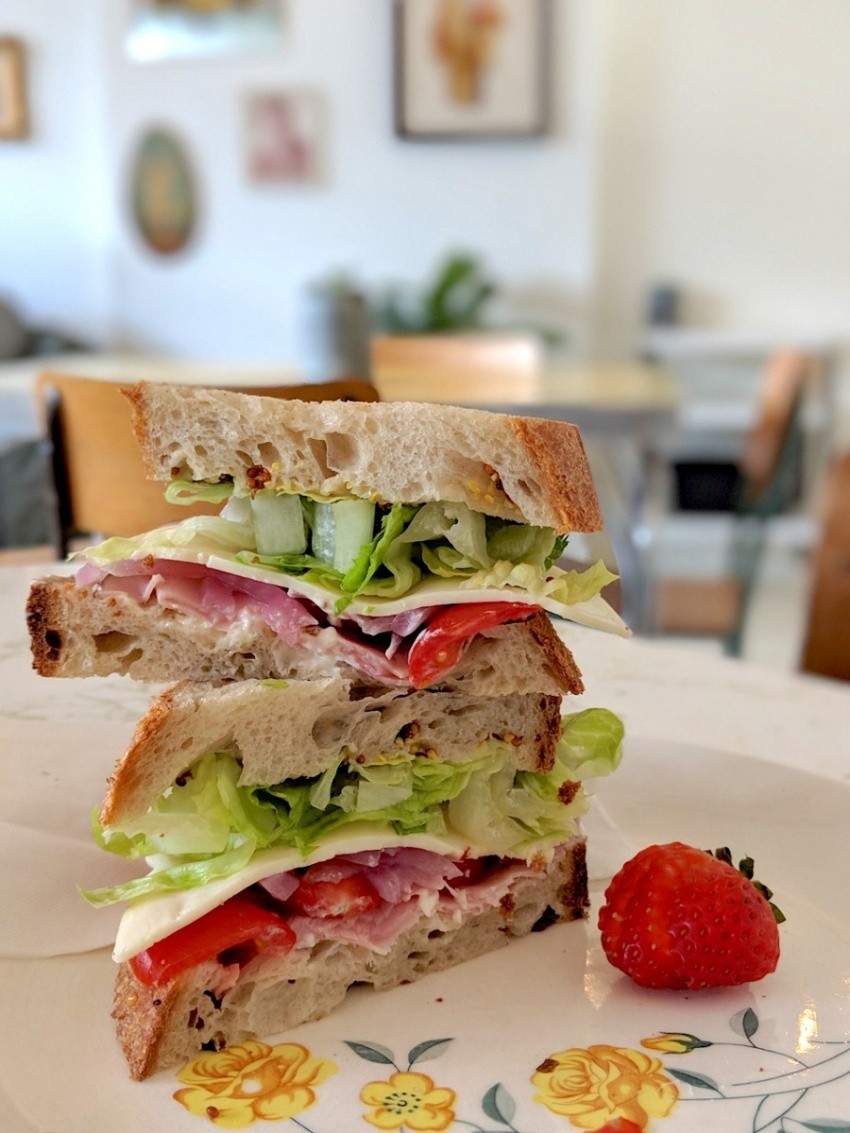 Hats off to the B.C. farmers and growers who are exhibiting food integrity beyond the pale. Their stellar ingredients are the reason for a boon in noteworthy restaurants, distilleries, breweries and cideries. Vice and Virtue arrived in July to bring the number of craft breweries to 10 and word on the street is that seven more (including one in Lake Country and one in West Kelowna) will open in 2019. It’s a beer bonanza!

And of course, there’s the wine.

The Kelowna area is home to 40 wineries interspersed over five unique wine trails. New to the scene is Ricco Bambino, a “different type of winery” that opened on Pandosy Street in July, and tongues haven’t stopped wagging since. 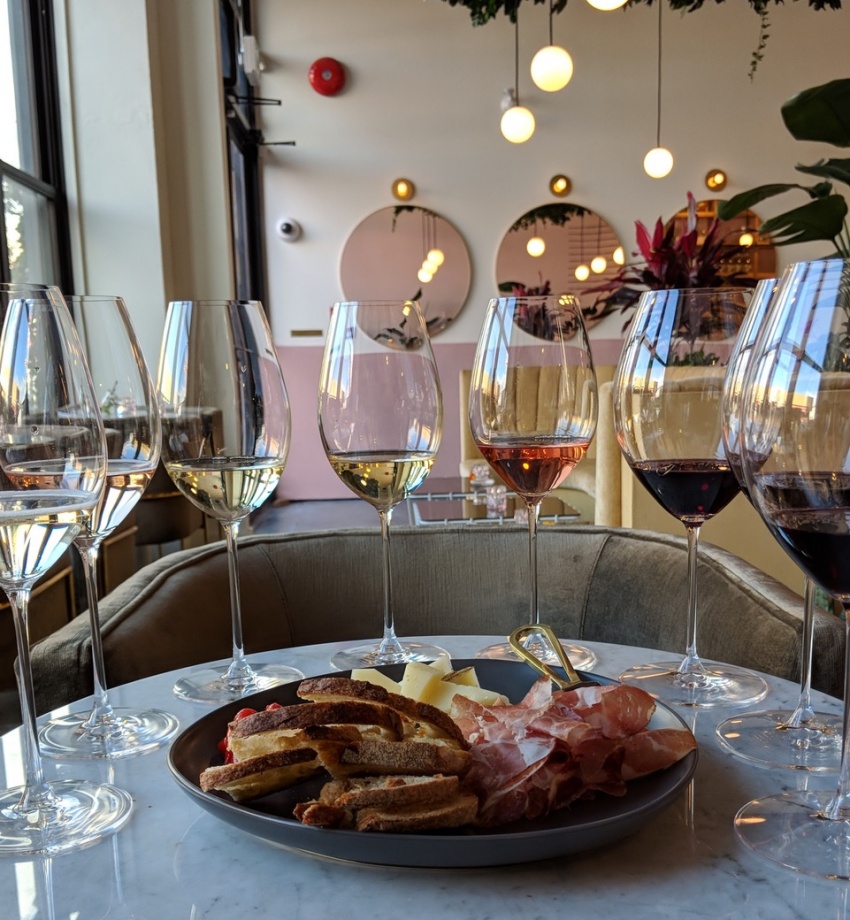 The room is a combination of mid-century modern and swanky Miami with sexy, olive green velvet upholstered chairs and peony pink banquettes. Concrete finishes lend contrast to smooth brass elements in an elegant space that serves as both tasting room and winery. The wine is aged on site in large concrete eggs. Being porous, the concrete allows the wines to breathe, evolve and develop a lovely round mouthfeel and intense expression of fruit. Be warned: if you go in for a taste, you’ll stay longer than anticipated; the setting is way too comfortable and beautiful to leave. To add to the struggle, the offerings of meats, olives, cheese (and other bits and bites) are superb. The wine is, in a word, brilliant.

Aman came to Canada from England in 2008. Amongst her many descriptions (food geek, marketing geek, and ex-footballer—as in soccer), Aman is also a self-taught cook. She and her family owned a successful contemporary Indian restaurant in north Kelowna for years until she switched gears to run unconventional pop-up dinners throughout the valley. Her mission was (and is) simple: to bring the community together through edible adventures.

If you see tickets available for any of her dinners, go. It will be one of your culinary highlights of the year.

Aman exemplifies the shift taking place on Kelowna’s culinary scene; that of a move towards conscientious cooking with a mission to connect people through thoughtful, flavourful food.

It’s an exciting time for Kelowna. Make it a destination for 2019.

5 Hidden gems of the Okanagan