From playing goal for England's national women's football team in the the early 2000s, to earning a marketing degree and working for one of the largest sports apparel company in the world, Nike, to being recognized as one of Western Living's 2015 Foodies of the Year, Aman Dosanj proves she isn't afraid of a little hard work, regardless of the playing field. Dosanj's contemporary Indian restaurant in Kelowna, Poppadom's, is a true gem of the city, serving unique spins on cultural classics. Always looking to learn more in the kitchen, this chef can be found hard at work cooking alongside her mother and collaborating with other talented chefs in the area.

Dosanj is big on family, embracing the myriad of amazing ingredients that the Okanagan has to offer, and she is always on a crusade to show interior B.C. (and the rest of the country, for that matter) that Indian cuisine is so much more than that scoop of lunch buffet vindaloo. I think our food scene is all the better for it.

You grew up in England, so how did you find up all the way over here in Kelowna?

We moved here as a family in 2008 with no previous restaurant experience. My dad had always loved Canada and the way of life over here. He was a software consultant, so his job was in I.T., but that was kind of the time in England where everything like that was getting outsourced to other countries. So, it was a now-or-never sort of thing and we just did it.

After living here for a little while, we were missing Indian food because, obviously, being from England, there’s a huge curry [scene] there, so we decided on creating Poppadom’s, which we opened in 2009 and we just celebrated our 5th anniversary a few months ago.

Poppadom’s is a family-run business, so what’s everyone’s chunk of the work?

My background is in marketing, so initially, I used everything I learned from school and the internships I had at Nike. My sister was a photographer, so she was able to do a lot of our imagery and design, my brother became our bartender, Dad does the paperwork and Mom ended up being in the kitchen with me.

Self-taught chef, informally trained--what would you call yourself and what's your vision for the food here?

Well, I prefer kitchen helper. [Laughs] Honestly, what happened was that we had a number of Indian chefs shortly after opening in 2009, but we found that most of the Indian chefs that we were bringing in to help us had a very narrow view of Indian food. What we wanted to do was highlight the Okanagan with our food because of its amazing produce and all of that. We also wanted to put a different set of eyes on the cuisine, same flavours that are true to the roots, but taken somewhere else.

What's an example of that elevation in terms of the dishes you create?

You know, we use French techniques to enhance different dishes. Or, instead of just cooking the crap out of vegetables, we like to keep more of their texture and have them on top of a curry sauce instead of just drowning in it, little things like that.

Is Indian cuisine knowledge something you look for when hiring a new person in the kitchen?

Our kitchen now is made up of people from the Okanagan. We had an Okanagan Chefs Association meeting at the restaurant once, but we were short-staffed in the kitchen so Rod Butters let us borrow a couple of guys from his kitchen and that’s when it clicked that it didn’t really matter if you don’t fully understand Indian food, because here, we can teach you all about it. If you can cook a piece of fish or a grill a piece of meat properly, you're what I need.

The restaurant is a decent drive from downtown Kelowna. Has that distance been an issue for you?

It has been and obviously, we still have our challenges. I lived in London and when I go cities like Vancouver, I’m immediately walking around, figuring out where I want to eat. [The challenge is] trying to overcome the barrier of having to drive 15 minutes just to eat a dinner at Poppadom’s. I’m always hoping that people will come and enjoy the food enough to come back again. It’s been interesting, but we want to take it somewhere else now.

I’m sure you’ve been asked this before since Vij’s is just down the road--well, five hours down the road (in Vancouver)--but how would you describe your take on Indian cuisine compared to his?

The best way to describe Vikram’s food is to say that it’s Vikram’s food. He’s got his Indian influences and he’s creating new dishes based on that. At Poppadom’s, we’ve gone down more of a traditional route in terms of the dishes that we try to play around with, but again, instead of working with a typical fish you’d see in a certain dish, we’re opting for an Ocean Wise-certified Arctic char that reflects the region of the country that we’re in.

When people hear “Indian food”, many would think of buffet. Is that a stigma you have broken through?

Yes. We only did that buffet-type lunch for the first six months of opening and that was only to try to get people experimenting with different types of dishes and it didn’t really work for us. I think we always had a very clear vision of where we wanted to take this restaurant and how we wanted to elevate things. Now, we've really shown people that Indian can be a lot more than just diced meat with a sauce in a bowl.

Do you find the chef culture friendly in the Okanagan?

It's been really fantastic. The Okanagan Chefs Association is a great initiative. For me, it's the best setup to ask simple questions, to grow and develop, and to help us source new suppliers. That, in and of itself, has taken a long time and each year, we're able to build on those relationships.

What’s on the horizon for you and your restaurant?

I would love to be in a location downtown. We've been looking to relocate for awhile now. Trying to find an ideal location that's the right size for us is a little tricky in Kelowna. Think of Ask For Luigi, that intimate 30- to 40-seat dining experience is what we want to create, being able to serve the food that we want to be serving. It's tricky because [where we are now] you need to put your ego aside a bit and realize that it's important to serve what's keeping your doors open, and what can or can't be taken off the menu. I think all of that is a little easier once you relocate. You can say, "OK, now we don't necessarily need to have that tikka masala on the menu; this is the food we want to serve."

As mentioned, Poppadom's is a family affair with everyone playing their part. What are those relationship dynamics like?

Obviously, we argue, but we've gotten to a stage in this business where we realize that we are at our best and most creative when we are all together. We all want to work with each other. I would to see my mom not having to work so hard in the kitchen, too, getting to the point where she can be the face of the restaurant, and do that sort of thing that Vikram does because she really does work so hard.

Dosanj and her mother together in the kitchen 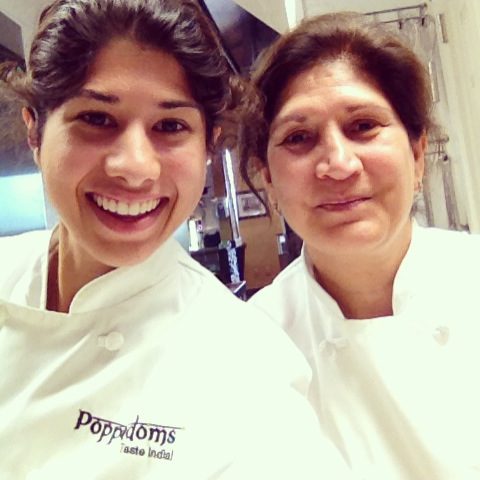 Opinion: The subtleties of racism in food culture