Today is certainly a dark day for the culinary community.

I had a brief opportunity to chat with the larger-than-life culinary media icon that was Anthony Bourdain in the most unorthodox of places: inside a garage in Wolfville, Nova Scotia. As unusual as it may sound, the social setting was one of warm hospitality following the opening gala of the 2014 edition of Devour! The Food Film Fest. Earlier that evening, and prior to the screening of one of his favourite culinary film, Eat Drink Man Woman, in the Acadia University theatre, Bourdain did a small media scrum in a room off to the side. 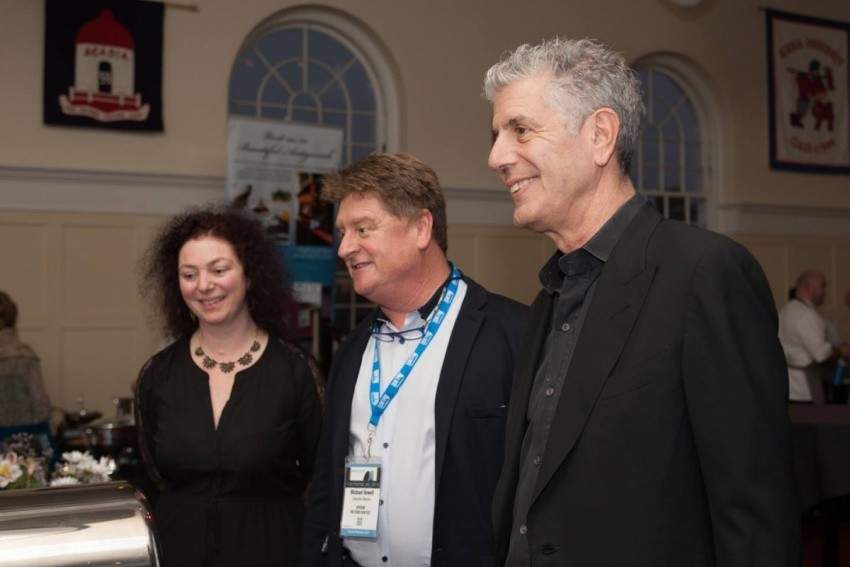 Many times, during media scrums, journalists or reporters will ask their specific questions and then drift back into conversation with a colleague or wait patiently for the question period to close. In other words, they can be boring. Well, when Anthony Bourdain is speaking in a room that holds only 30 people, I can assure you that when his deep, distinct voice rose to answer a question, every, single person in that room watched and listened as eagerly as young child talking to Santa Claus.

Bourdain was almost whimsical in nature: an individual you'd think you would never encounter in real life; and yet, here he was and in Wolfville, Nova Scotia of all places.

Back at the garage, at a private VIP party of true East Coast hospitality complete with donair (of course), Bourdain was guided through the small space, taking a few minutes to shake hands and chat with each person. I remember talking to him about his whirlwind trip to Nova Scotia (his schedule only allowed him to be here for a day or so) and going to a college in Halifax to talk with students in its culinary program. His interest in Canadian food was undeniable and watching him bite into a Halifax donair for the first time is a moment I won't soon forget. 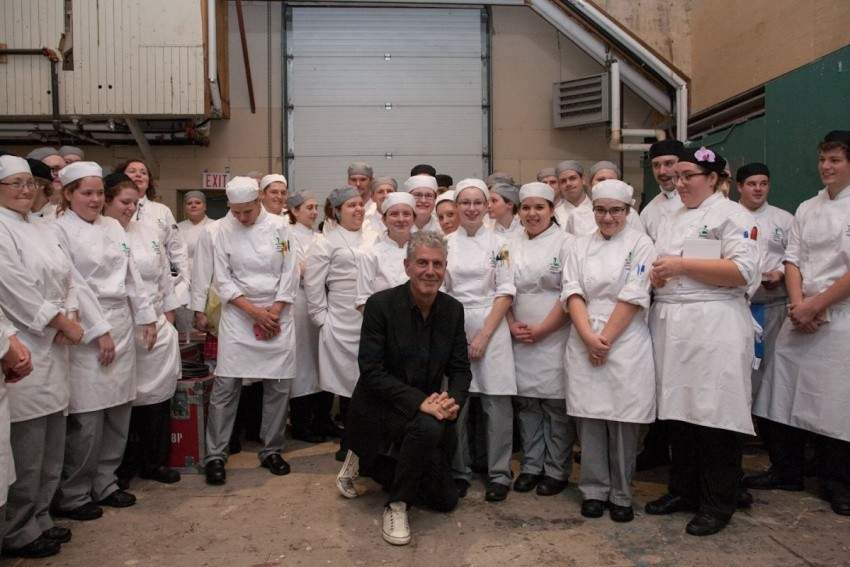 To myself and many others, Bourdain was the kind of culinary legend that I've followed closely for years and perhaps even idolized in some way or another. His all-out-on-the-table attitude into the culinary media world by way of Kitchen Confidential and then through exploratory television series like Parts Unknown made him a culinary celebrity unlike anything we had seen before. I mean, sure, the idea of a travelling food show with a captivating host was nothing groundbreaking, but Bourdain's approach certainly was. With millions of eyes on him as he travelled to unique locales like Lebanon, Saudi Arabia, New Zealand and more recently Newfoundland (lest we forget our own country can be as exotic to people on the other side of the world), Bourdain sought out to not only try the food of different countries, regions and cultures, but to try to understand it as well.

Scenes showing him delve into regional specialties (Bourdain digging into a pressure-cooked whole camel with his bare hands while in Saudi Arabia remains particularly prominent in my mind) might offer some sort of shock value to a viewer, but these situations were never, ever without purpose. To bring it all together, it was always his matter-of-fact tone to his voice, his intonation that made you believe him and want to know more. He was a worldly culinary authority like no other.

As bright, successful and exciting as certain people's lives may appear to be, you never know what battles they might be fighting on the inside. Today is a solemn reminder of that.

I am not the first, rather, just one, person in a long list of millions to say this, but rest in peace, Mr. Bourdain; and thank you for all that you have done for global food community. Whether we are cooks, chefs, restaurateurs, writers, regular food-obsessed fans or otherwise, we are all the better for it.

all photos courtesy of Devour! The Food Film Fest

“As you move through this life and this world, you change things slightly, you leave marks behind, however small. And in return, life — and travel — leaves marks on you. Most of the time, those marks — on your body and your heart — are beautiful. Often, though, they hurt.” #anthonybourdain Depression does not discriminate. It is capable of eating the world alive, even its fiercest superheroes. #ripanthonybourdain

I am sad to wake up this morning and hear the news about the passing of Anthony Bourdain. I was fortunate to have spent some time with him back in 2012. His command of the English language, amazing wit and the ability to tell brilliant stories had me laughing the whole time. He influenced an entire generation of chefs / cooks and was the one person who made being in the kitchen so cool. #rip Tony. You will be greatly missed.

"I've been given the luxury of finding books or publishing existing books or voices that I'm already aware of or, in some cases, commissioning books from people who hadn't thought about writing one," he said. "It makes me feel good. It's not really a money-making enterprise by a long shot, it’s a passion thing. It makes me happy." - from my last interview with @anthonybourdain for @munchies . . by Tom Vitale

We are deeply saddened by the news of @anthonybourdain passing today. His time at Devour! is easily one of the most memorable moments to date and helped put our festival on the map. We’ll never forget the excitement he brought to the culinary community and how excited our chefs were to cook for one of their heroes. He will be missed. Our hearts go out to his family.

If you know anyone that needs a little extra love today- give them some. We have lost too many people to suicide. Bourdain was a Culinary HERO. Cheers to your COURAGEOUS life.  In a garage in Wolfville with @kingofdonair and @dansgoodside

This picture was taken after a long day of talking sexism in the restaurant industry. It was just before Christmas, and Tony, so generously, agreed to fly to Toronto for the day so we could talk. There’s so much great footage—as I’m sure you know, he’s infinitely watchable. He was my champion, when almost no other high profile dudes would be. He, by example, forced them to pay attention, even if they really didn’t want to. I’ll always be grateful for that. It meant not just a lot, but everything. I’m in shock and devastated, I don’t have the right words (or even the wrong ones). I’m so glad to have known him. I’m so glad for his incredible body of work, what couldn’t he do?? And well! No not just well, better than anybody else. I’m so sorry for his family, and warrior girlfriend Asia Argento, his friends and colleagues. What a terrible loss. We will not recover easily.

The words of a Giant #RIP @anthonybourdain

I read Kitchen Confidential on the plane to NY where I was going to attend @theculinaryinstituteofamerica Little did I know 2 years later Anthony Bourdain would be our graduation speaker. Over the last 15 years since then you have been one of the few chefs to bring our industry into the “mainstream” while keeping the integrity of what we do intact. Through your books, tv shows and riveting words you have made all of us cooks proud. Thanks for everything you have done. RIP chef. #cooksrule

He made me laugh and reminded me that we live in a magical place. A very sad day, thoughts and prayers. @raymondsnl @themerchanttavernnl

‪He touched millions of lives, including mine. I learned from his words, his experiences, and his anecdotes. After meeting him, I was inspired to walk a certain path by his story and actions. I am crushed by his passing. May he know peace in the next life. @anthonybourdain 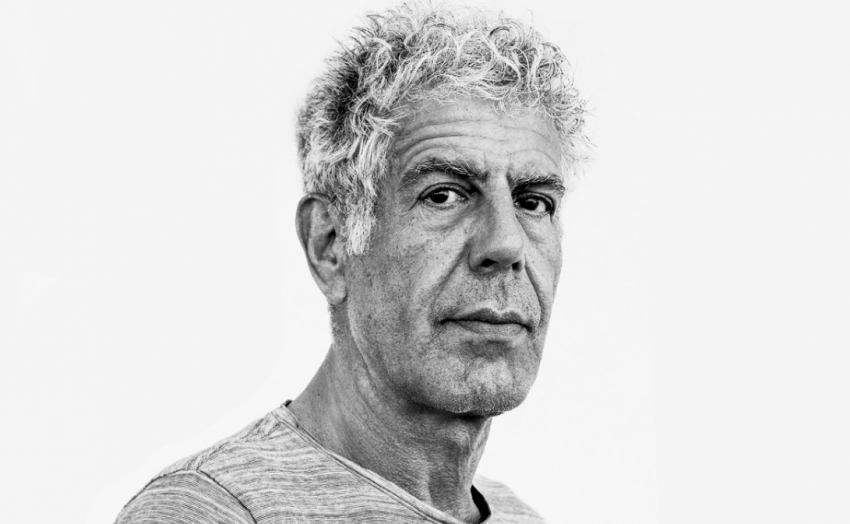 "Bourdain democratized food in a way that the glossy rags and TV hadn’t. Instead of getting a man in chef whites to show us how to make ramen on a soundstage, we saw a hardscrabble cook out in the world with an endless curiosity and an open heart." 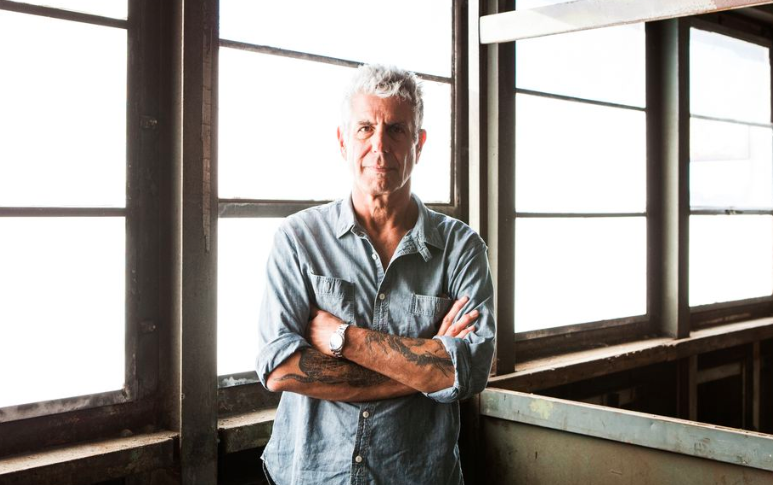 "There are things he liked talking about – where he’d been lately, what he was planning for dinner, what he was angry about that day – and things he wouldn’t entertain, such as food trends or celebrity chefdom."

Read the full article from Tucker in The Globe and Mail here.

Daily bite: Edmonton’s Paul Shufelt gives back to the community with culinary events