"I know where Saskatchewan is! I'm not an idiot, Dan," Linda Miller-Nicholson says to me, laughing, as I try to explain where I grew up in Canada. She then gets back to work, unwrapping two big spheres of homemade, red and white pasta dough.

I'm standing next to Miller-Nicholson at her large wooden work bench in her Seattle kitchen as she starts preparing custom pasta at my request. Being entranced by her pasta-making skills for quite some time now, it feels extraordinarily exciting to be there with this talented woman.

Formerly a popular blogger via SaltySeattle, where her motto for years has been "I do crazy shit with food," her culinary skills go significantly beyond that of a standard home cook, but not quite to a chef's level. As well, she is currently penning a cookbook to be published by Harper-Collins and released in 2018 and makes a variety of television appearances.

"It will give readers the key to unlock the world of coloured pasta in an easy, vibrant, and fun way," says Miller-Nicholson.

At the base of it all, she loves experimenting with flavours, colours and textures. Over the past couple of years, she has delved deep into an intriguing artform that one can only describe as pasta art.

Garganelli, from Romagna, are named from the dialect word garganel, which describes the rings of cartilage around a chicken's trachea. These are the true stories I repeat to myself so I don't eat TOO MUCH pasta.

Using traditional pasta dough as her canvas, Miller-Nicholson injects colour into the pliable medium to create some of the most brightly-hued plates of fresh, handmade pastas you've likely ever laid eyes on. Imagine lasagna sheets dotted with musical notes, brightly patterned pappardelle, ombre cavatelli or rainbow spaghetti. To her, the sky is the limit when it comes to what you can do with pasta.

"I love colour, but I am also super mindful about health," she explains. "My colours are all primarily rooted in their health benefits as I use ingredients like spirulina, beets, blueberries and acai berries to derive different shades. The fact that I can make a rainbow out of them is just good-for-you icing on the cake."

Today, we are setting out to make a Canadian-inspired pasta of her choice. Red and white dough and a handful of maple-leaf-shaped cutters sit ready to go. As Miller-Nicholson walks me through the process of turning basic dough into something more striking, we talk candidly about why she loves Canada, especially Justin Trudeau, why B.C. is an especially delicious place to visit and how she respects the fundamentals of making pasta from scratch. 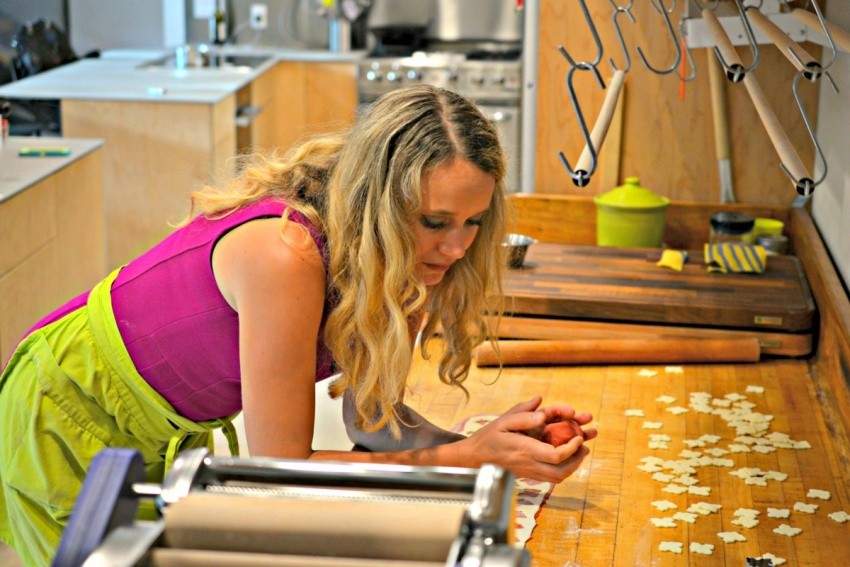 We hear a lot of people saying, "If Trump gets voted in, I'm moving to Canada!" Do you hear that a lot from your friends?

I am fortunate to have the kind of friends who don’t believe there is a remote possibility that Trump will get elected, thankfully! Most of us here in the Pacific Northwest live in a bit of a bubble with big Canadian and global influences, so many of us are shocked that someone like Donald Trump could have made it as far as he [has].

Does Justin Trudeau pop up in your news streams a lot? What do you think of our country's leader?

I hope it’s obvious to most Canadians at this point that the whole world is madly in love with Justin Trudeau! Ha, ha, ha. I think as our society becomes more and more global, we really ought to think about nominating a person to kind of “oversee the world,” in a manner of speaking, and Trudeau would be at the very top of my list to take the helm. 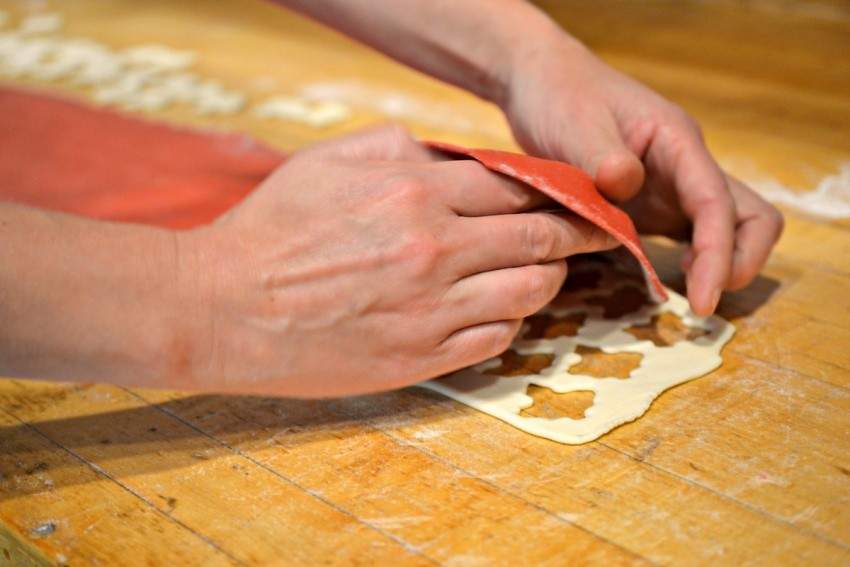 Do you visit Canada often? Are there any ingredients we have there that you like to work with or enjoy eating while you're in Canada?

I get to Vancouver and Whistler a few times a year because it’s close and devastatingly beautiful. I’ve only had the opportunity to explore British Columbia and Ontario, but I would love to one day visit Quebec, and I’m told by many a Torontonian that the food scene there [is unreal], so it’s also high on my list. The Okanagan is among my favourite wine regions in the world for its beauty, innovative approach to winemaking, and delicious wine, obviously. Because B.C. is so proximate, our ingredients are very similar. However, every time I’m in Vancouver, I make sure to eat as much seafood as possible because there is an even bigger Asian influence in Vancouver than in Seattle. There is a lot more diversity in preparation and even variety of exceptional things from the sea. I also love wild game and Whistler has a couple of restaurants that excel in preparing it, such as the Bearfoot Bistro.

What is one thing you really admire about Canadians?

Most of my Canadian friends are really progressive and embody a modern lifestyle without being egregious about it like some of the man-bunned hipsters in Seattle. Canadians also seem to value the art of travelling and appreciate how travel can make us all more empathetic global citizens. 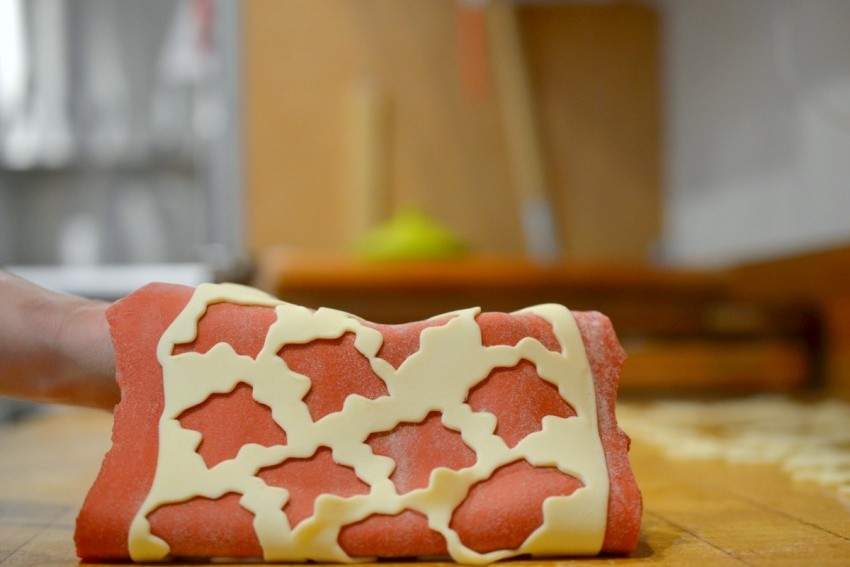 How did you get started in this self-invented "pasta art" world?

I started making coloured pasta as a way to get my family, especially my picky-but-awesome kid Bentley Danger, to eat more vegetables. It’s since morphed into what I do today over a period of a couple of years. Before I really focused on coloured pasta, I had been making pasta in general on a very regular basis since childhood. I would say that adding the colour wasn’t difficult per se, but it helped that I had a solid background [in pasta-making].

When I asked you to make a "Canadian" pasta with me, what immediately came to mind?

Is it terrible that I thought of maple leaves? In my defense, it is autumn and the colourful leaves are really inspiring right now. Plus, I love making pasta that really reflects the nature of what I am trying to convey, and you can’t see red, white, and maple leaves without immediately conjuring Canada.

Do pasta purists ever cry foul at your vibrant creations?

Some do and some embrace it. I’ve had Italians tell me my bucatini all' amatriciana wasn’t the dish even though I followed the traditional recipe to a tee and the only thing different was the noodle colour. I tend to shrug those comments off though, as we’ll never move forward if we don’t innovate.

What is the coolest "pasta art" you've made to date?

Cool is so subjective! I’m a fan of the Stranger Things lasagne sheet, and more recently, I figured out how to make bucatini--which is usually made by machine--by hand.

Since you go the all-natural route with colours, are there any ingredients that have flavoured a dough in an undesirable way?

With the book I'm writing, I've had to limit the amount of dough recipes I can include because I don’t want it to turn into an encyclopedia! Last week I made 29 doughs in one day with the intention of narrowing it to 24. Most of them were fantastic, but I cannot say enough bad things about the merlot dough. It was gross with a capital G and thankfully didn’t make the cut.

If you could cook pasta for one Canadian, who would it be?

This is such a loaded question! Is there a person alive who wouldn’t say Justin Trudeau? I guess Canada felt that after foisting someone as horrific as Justin Bieber on the world, you had to give us a good one, and we sure appreciate you for that! 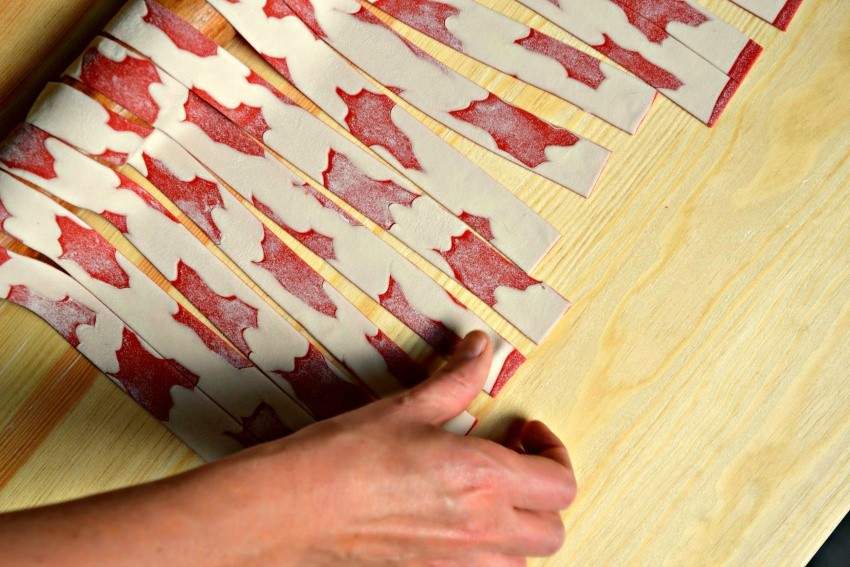