Julia gives us a nice rundown of the final four bakers and their strengths. I will be a bit more blunt than she was. At this point, Vandana Jain is the frontrunner with her Indo-Canadian flavours and adorable personality.

James Hoyland has great flavours and I suspect has deep knowledge but his presentation and time-managment skills aren’t up to par.

Sabrina Degni has had some stumbles, her presentations skills are good but I think her flavours are not that interesting.

Linda Longson’s technique and presentation are good but she is a little boring. And the show keeps referring to her “time-tested” skills and experience, as if to point out that she is old.

Our first challenge this week is a tough one. The Signature Bake is mille feuilles. The bakers have to make two different flavours of the layered pastry.

At the announcement, the bakers look surprised, but what you may not know is that the contestants actually received list of the Signature Bakes and the Showstoppers before the season started. They had time to practice all their creations, whether they did or not, we will never know.

I love milles feuilles but I would never make it at home, making them takes pastry and presentation skills.

Linda has said a couple of times that she is outside of her comfort zone. She is making a raspberry and white chocolate and a nectarine with cardamom caramel. I admit, I’m surprised about the cardamom. But it turns out she didn’t put enough in it, according to the judges. Though, her pastries are tasty and very pretty. 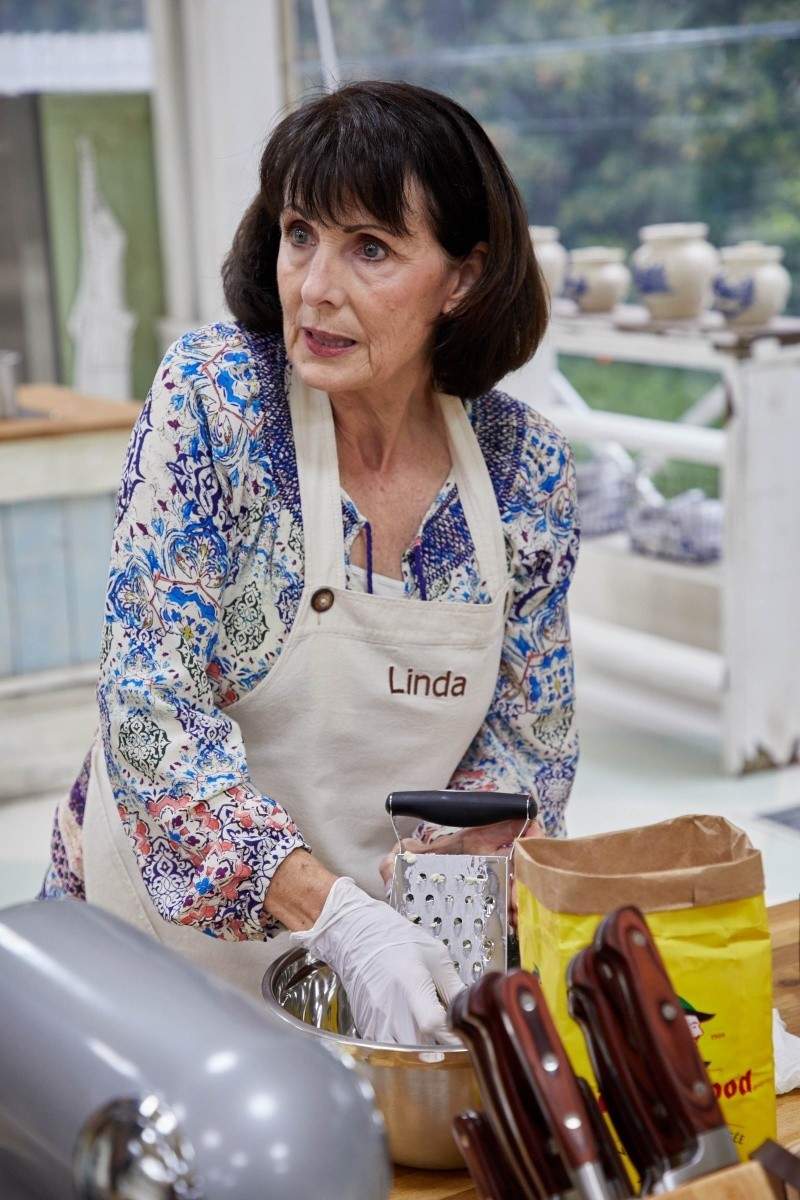 Vandana is using a flavour that no one has heard of: rooh afza, an concentrate from India, made of herbs, fruit and vegetables. It is said to have a cooling effect in the summer, Vandana says it nourishes the soul. She is also making a more traditional raspberry and white chocolate version. Once her pastry is in the oven, she takes over ousted Terri Thompson’s spot and starts talking to her dough. Unfortunately, it didn’t help and her pastry is underdone. But Bruno is very excited about tasting a new and interesting flavour. He says she was five minutes away from perfection – which could be a song title underscoring any baked good.

Sabrina is heading away from her Nonna’s recipes, making one mango and coconut mille feuilles and a strawberry-pistachio version. Her pastry was also underbaked but she was ambitious with making four different fillings.

Always ready to push the boundaries, James is incorporating some savoury flavours into the dessert. His strawberry basil and balsamic blackberry reduction sound good to me. It surprises no one that James has trouble cutting his flaky pastry. I feel for him, because I can’t even cut in a straight line, let alone on TV. He also doesn’t have 16 pastries on his plate but the Judges forgive him because they taste delicious.

The Technical Challenge is an Opera cake, which is one of those cakes you always see at a patisserie and never order because it looks artificial. An Opera Cake is layered Joconde sponge soaked in coffee syrup with a coffee buttercream and French ganache. It is also perfectly square.

At this point in the show, I realize that it is French Patisserie week and Bruno is not speaking enough French. Linda has never made one and doesn’t know what it is. But James does. James made Joconde sponge a couple of times last week so he is well-acquainted with the stuff. He has also eaten an Opera cake and knows that there is a lot of coffee flavour; but we know what his problem will be: the straight edges and the chocolate writing seems like it is a trap set up for James. 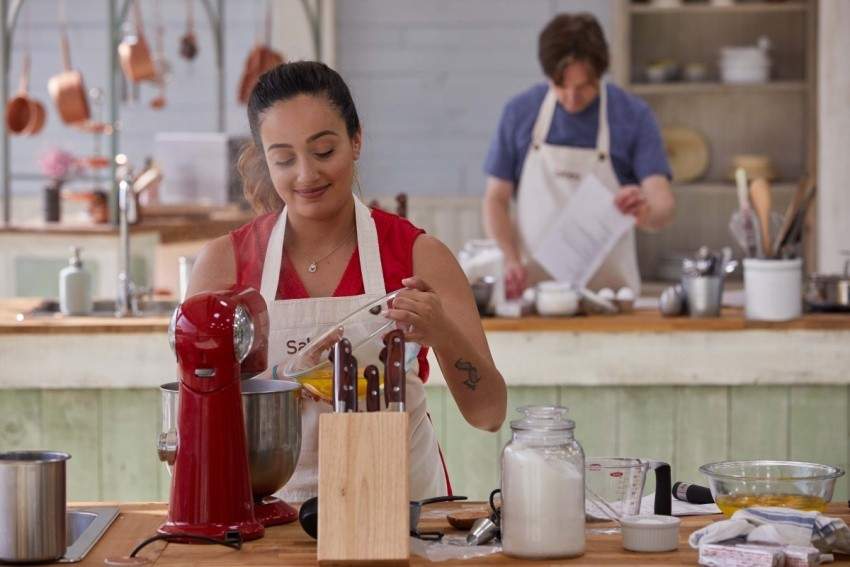 Sabrina heats her knife on an element to make cutting easier. But her cake is too dry, and her elegant glaze has a thumbprint in it. But her cake wins her a second place. I (and everyone watching?) underestimated James, and his cursive writing is lovely. His cake also has lots of coffee flavour and the cutting wasn’t horrible. James is in first place. Why did Vandana use that strange tip to write the word Opera on the top? I hate to say it, but she is in trouble. Her cake is dry and her writing looks weird. She is in last place. If this was Facebook I would insert lots of crying face emojis here. Like the others, Linda’s cake could have used more coffee syrup and her writing is not up to par, but she gets third. Let’s take a moment to appreciate Dan. First, he is wearing a furry sweater in the middle of summer with white pants. At one point, he backs away from the bakers, protecting those gleaming white pants from what could have been unfortunate chocolate placement. We definitely need more Dan. The showstopper challenge is to make a croquembouche, which is a tower made out of cream puffs glued together by caramel and spun sugar. My mother’s (second) wedding cake was a croquembouche with chocolate and vanilla fillings. I only liked the vanilla so I would just squeeze out a little and leave the chocolate ones behind slightly mangled. I was 12, it was the 80s. But I would do it all again.

Julia tells us that a croquembouche is cream filled pastry balls. But she does not follow that up with a joke. It’s déjà vu to soggy bottom week and wishing that the Brits could swoop down and make some innuendos once in a while.

Linda restates the obvious a few times and then the bakers are off to make an elegant showstopper in four hours. The choux pastry dough is difficult to make and has so many steps that I feel a little remorseful that I wasted all those chocolate creams puffs years ago.

James builds with hope and sugar. It seems that one of the requirements, or at least suggestion, is that the bakers decorate their towers as if they are Christmas trees. I’m not sure why we need another kick at the holiday week can. In France, croquembouche is made for all sorts of celebrations (like my mother’s wedding).

Linda says that her family loves cream puffs and she has made them before. She is filling her balls [insert joke here] with marscapone and coffee. Sabrina’s puffs are going to be filled with a French-inspired vanilla mousseline. She is using flour to thicken her mousseline, which turns out to be a bad idea.

James is a little bit over-confident with his timing and Rochelle heads over to put him in his place. We know that James has some time management challenges, but he is kind of like a mad genius in that way. I’m a bit surprised that he hasn’t invented or found a less time-consuming cream puff filling method. He is just tediously filling them with chocolate and raspberry.

Vandana chooses the seasonal flavours of mint chocolate and orange. I’m bored by that choice, but I understand the reasoning. Building a tower out of spherical objects is difficult, and when you have to use caramel as your glue, it can be painful on the fingers and frustrating. Luckily, we have Dan for comic relief as he channels all of us by sneaking to try a cream puff. Sure, he uses Julia as his scout but by now it is obvious that Julia doesn’t eat dessert so I think Dan should have two just for him.

Part of what sets the Great Canadian Baking Show apart from other competition shows is that the bakers are not pitted against each other in some fake good and evil narrative. You can see that they are rooting for each other and are in competition with themselves as much as each other. A good example of this is when Jamesey (as he calls himself) runs out of caramel and his showstopper is almost a door stopper. But Vandana saves his croquembouche tush and gives him her extra pot of caramel. 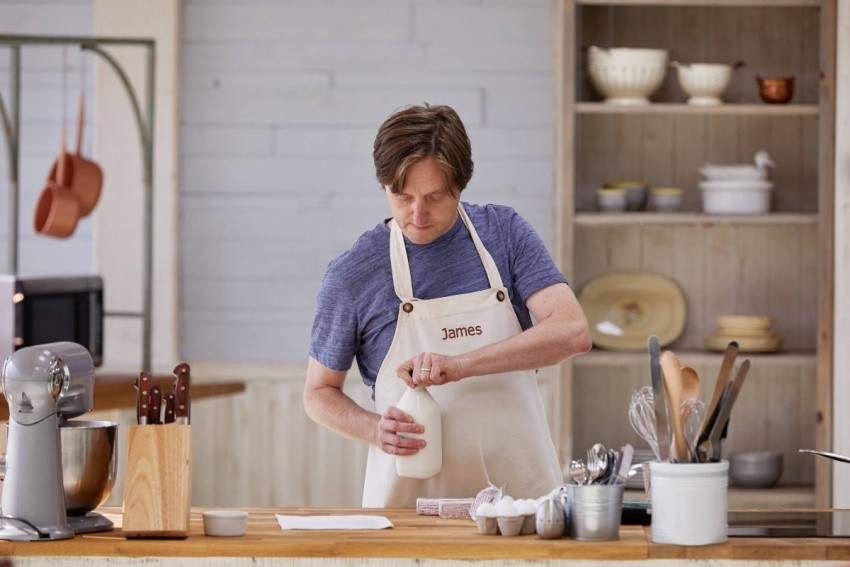 James is a physicist, and my son takes AP physics, so I am familiar with some of the hands-on projects they have to do, which involves a lot of math; which is my roundabout way of saying that I am surprised that James didn’t figure out the mathematical properties of his tower before he started baking, because he doesn’t have enough puffs to make it to the top. He improvises and fills it in with nougat stars. Rochelle aptly calls his creation a hive. The judges suggest that perhaps using chocolate ganache as icing while using hot caramal to glue it on was not the best idea. Bruno has the best comment of the night when he says: “Somehow, you deliver... something.” His creation tastes excellent but lacks elegance. And since it is French pastry week, this may be a problem. In contrast, Sabrina’s croquembouche looks amazing, the spun sugar is as light as air. The judges note that it is a little bit lopsided. Last week, they asked Sabrina to up her game and she did. But her cream puffs are underbaked and the mousseline is giving Rochelle a mouth full of flour.

Vandana’s croquembouche is a little skinny. And her choux is a little underbaked but her flavours are, as always, good. Bruno says she is a cool cat under pressure which isn’t how I would characterize her (adorable, organized, thoughtful) but I only see what is on TV.

Linda’s tower is dotted with white doves and the judges are so overcome you would have thought doves flew out of the middle and sprinkled them with rainbows and gumdrops. Her choux puffs are golden brown with perfectly subtle coffee flavour. It is spectacular, sophisticated and elegant--I guess Linda is staying. 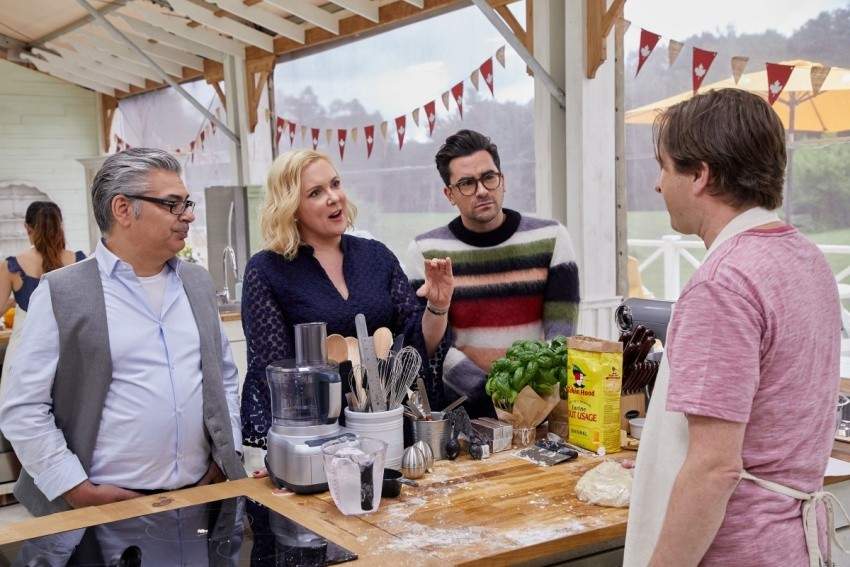 It can’t be easy to decide who to say goodbye to, but the judges are looking ahead to next week’s final. it’s hard to imagine that James could be crowned Canada’s best baker. So, I’m guessing it is his turn to leave the tent. Personally, I would like him to stay for the entertainment factor. And I think his nerdy ways are interesting and add dimension to a show that, at its worst, is just about pretty icing.

When Julia announces that it is James who is heading home, you can see that Sabrina thought it was her. But it’s not, it’s British James. We will miss you and your adorkable methods.

As soon as Dan says that this week’s star baker has time-tested skills, we know who he means. Linda is star baker. And in the ending video clip she tells us again that she is star baker. If she wins this show, I hope they give her a writer.

Next week is the finale! Looks like we will be having a garden party with the whole gang back together. I’m excited. I have a favourite. Do you?

I thought this week was the first week with tough challenges. The episodes are not shot a week apart but actually just days apart. So the bakers do not have very much time to work on their next week’s recipes. So, the remaining bakers did do a lot of work in a short time, and are doing well considering the pressure. When I think of whose pastries I would like to eat, there is only one person who consistently stands out for me. You better bring it next week Vandana!