We usually eat chocolate to help relieve stress, but this chocolate-making episode of the Great Canadian Baking Show was so stressful that I’m not sure the bakers will ever be able to enjoy chocolate again!

Judge Bruno Feldeisen is a chocolate expert, one of the foremost chocolate experts in the country, in fact. Rochelle Adonis points out that this week is important because next week is the semi-finals—as if every week wasn’t important.

The first chocolate challenge is making a tart. Part of the challenge is tempering chocolate for decorative elements. We will learn that if it is not tempered properly, then it will not “snap” properly. The word “snap” is repeated many times over the next hour. Feel free to take a shot of hot chocolate every time it is mentioned.

Andrei Godoroja is mixing passion fruit with a mix of light and dark chocolate. In his first big fail, Andrei overbakes his cocoa-flavoured dough and has to make a second tart shell. But it all comes together at the end. His tempered chocolate on top looks like sails and the whole thing is a winner.

Sachin Seth also tempers his chocolate well and places a beautiful lotus made of white chocolate on top of his tart that has feuilletine in it. Co-host Dan Levy is digging the feuilletine, which is like fancy sugar-coated corn flakes.

Megan Stasiewich is blind baking her tart, which makes me happy. No more listening to Grammy and skipping that important step. She also makes homemade crunchie honeycomb (like the inside of a Crunchie bar) to top. I’m not sure that Megan realizes that she is a scientist as well as an artist. That golden crunchy stuff is a science experiment gone right! 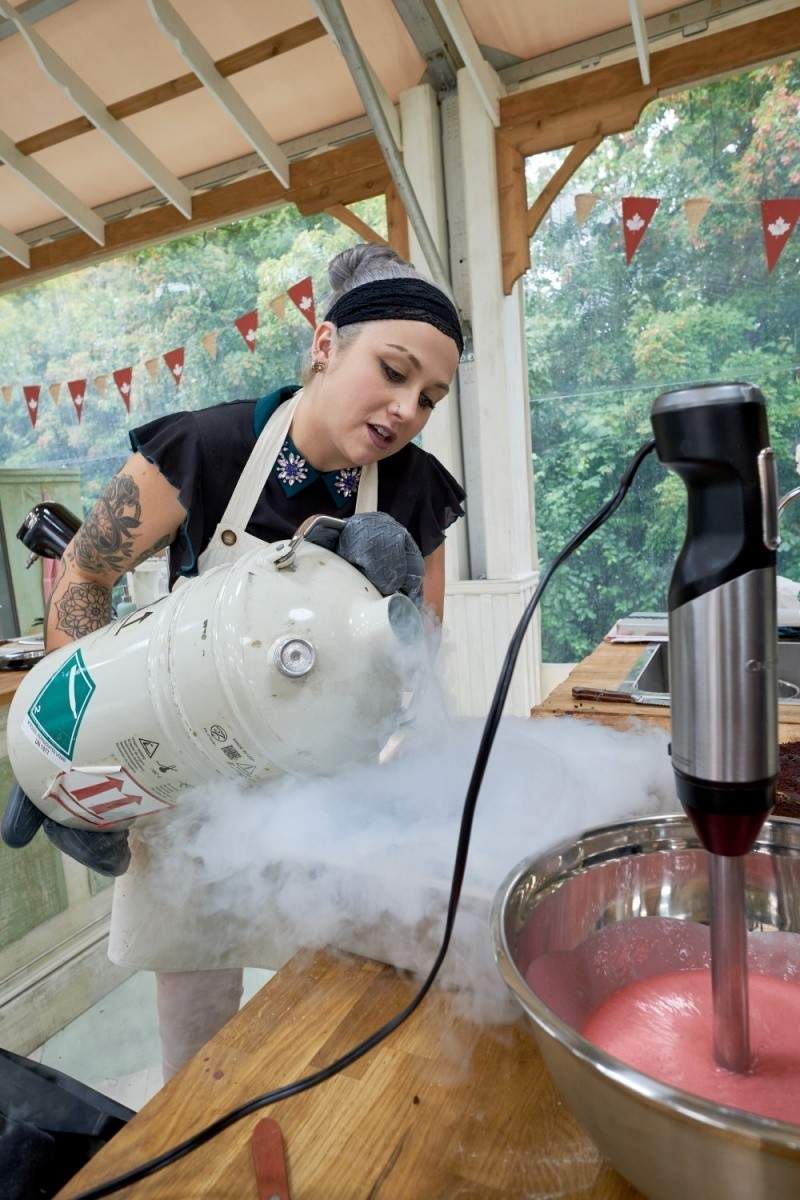 Both Mengling Chen and Timothy Fu are using tea in their chocolate tarts. This is risky because tea is delicately-flavoured and can get easily lost in chocolate. Timothy’s Earl Grey flavour is missing in his lemon-chocolate tart but Mengling’s Thai tea stands out. The judges are fighting over bites of her tart.

Co-host Julia Chan finally eats something! She had some lemon curd and loved it.

At the technical bake, the hosts announce a twist: the bakers will start one after another so the judges can taste the mystery creation right out of the oven. Mengling is the first contestant to start baking… a chocolate soufflé. And the whole thing would be hilarious, but she is so anxious that her usual quirky nervousness looks like real panic. I wonder if that is why she is brought in first.

The instructions for the chocolate soufflé are so barebones that even Dan seems surprised. “Make chocolate pastry cream, make meringue, make soufflé,” is his description of the recipe.

Sachin has never made a chocolate souffle either, but he knows enough not to over mix the beaten egg whites with the chocolate cream. 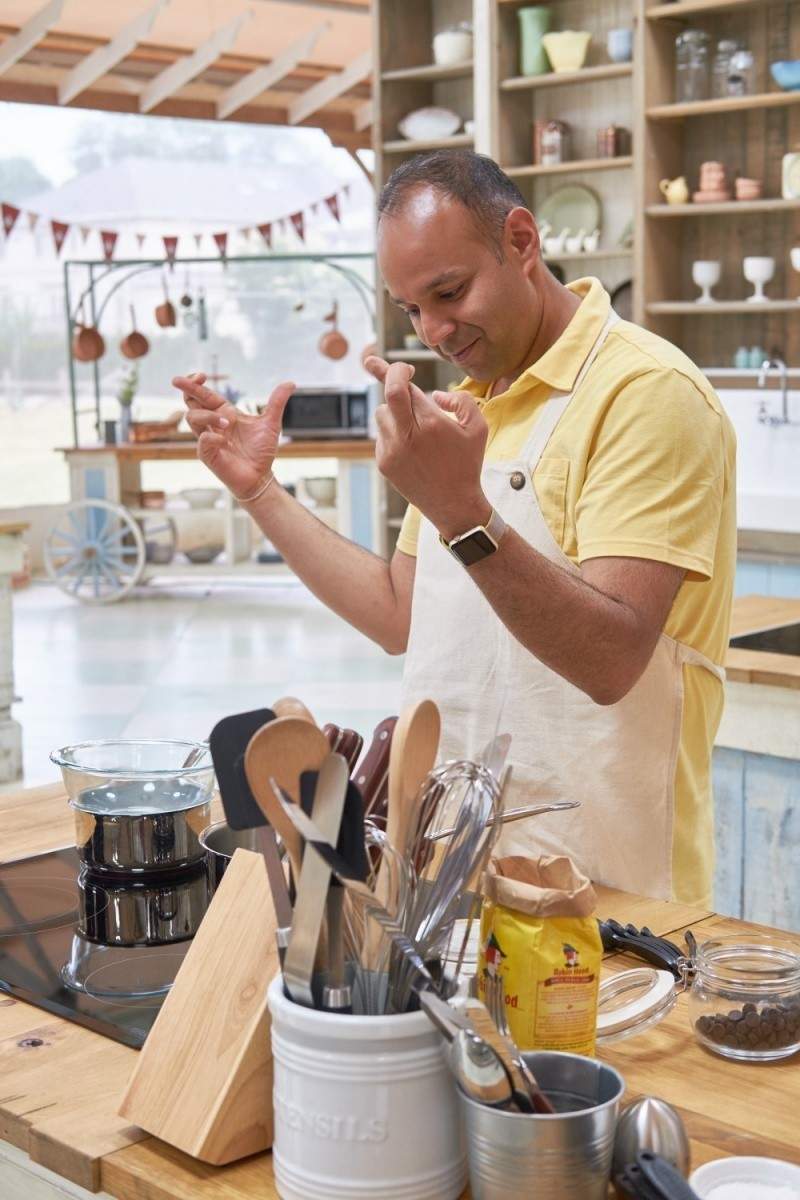 Timothy’s face when he sees the recipe is pure fear, Megan looks like she is on the edge of tears, and Andrei is brought in last. Is that so the other bakers can’t copy him? But even he is perplexed by the lack of instructions.

Mengling places hers in the oven and then looks at the piece of string lying on her counter and wonders what that is for, until she sees Sachin making a cuff around his soufflé dish. She opens the oven (bad idea for things that need to rise) and tries to fashion some parchment paper around the hot dish. It’s only semi-successful.

The bakers are falling apart faster than a souffle stuck in a cold winter breeze. It’s time for the gingham altar, but it’s no altar. It’s just a table for two with Rochelle and Bruno sitting with their backs to the bakers.

Dan brings up Mengling’s souffle as everyone stands around silently. Surprisingly, the judges don’t hate her souffle. Mengling does herself a disservice by being so nervous, and we expect her to not do well, but in the end, she is solidly in the middle at third.

I admit, Sachin looked like he was doing a good job mixing his souffle but it turns out that he undermixed it, and there are chunks of egg whites left in it, placing him in fourth.

Timothy shakes his head sadly as the judges unwrap the parchment. He has good flavour, but the texture is dense and gummy and his souffle didn’t rise, putting him last.

Megan has never eaten “one of those things” but her souffle is light and airy. When the judges say this baker knew what they were doing, she shakes her head in surprise, but she does something right and wins her third technical challenge.

Andrei makes a rare misstep with his overdone souffle, but the judges like the texture and flavour. I swear I saw a tear when the judges were praising him. He is happy with second place.

The Showstopper is another throwback to the 80s. The bakers are challenged to reimagine a Black Forest cake that includes the chocolate cake, cherries, whipped cream and kirsch. I can’t believe that the producers have ruined chocolate week with this challenge.

Mengling decides to incorporate miso into her cake. It has many layers and she is hopeful that the miso will go well with the cherries and the chocolate. She is wrong. Rochelle is not a fan of the miso, which does seem like an outlier. Dan is super excited to try sweet miso, which isn’t sweet at all, and this is the first time we have seen him look so disappointed after he eats something. And her pink chocolate “cage” has no—you guessed it—snap. 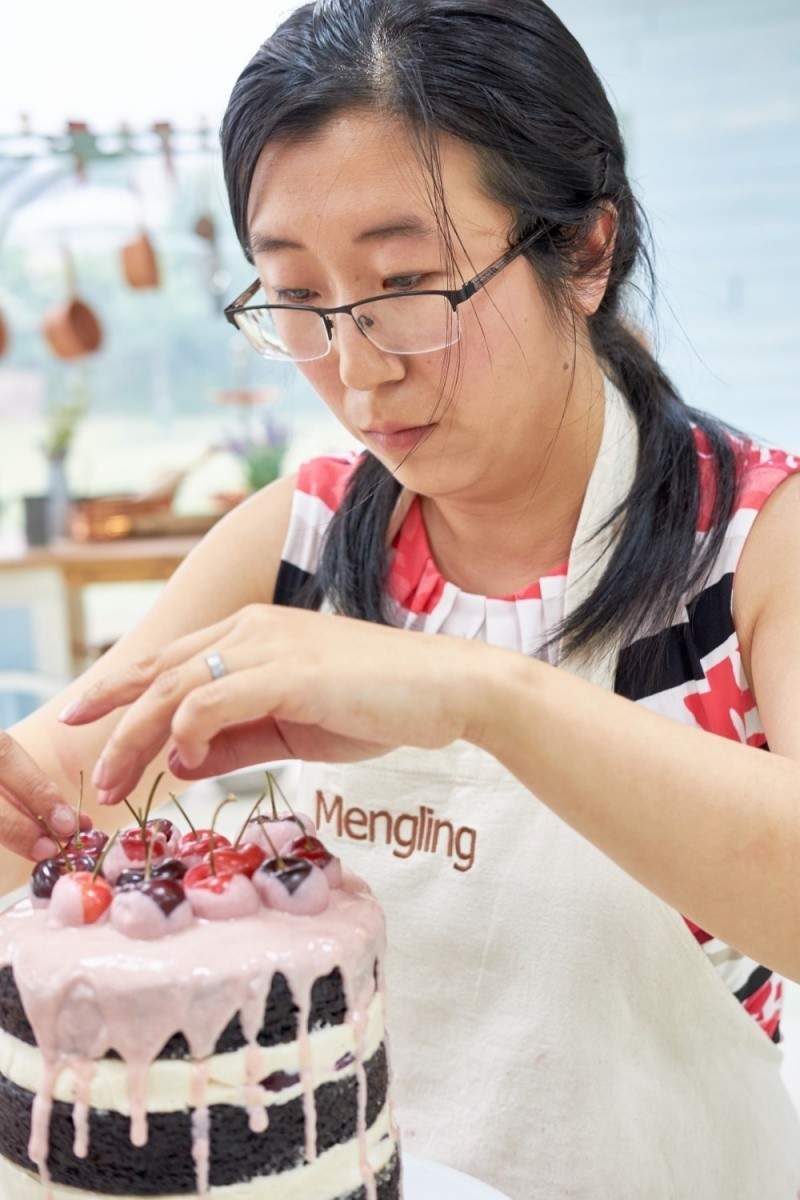 Both of their cakes are beautiful. Andrei places chocolate trees around his pure white cake, so it is literally a cake in a black forest. It is, as always, beautifully imagined and executed. 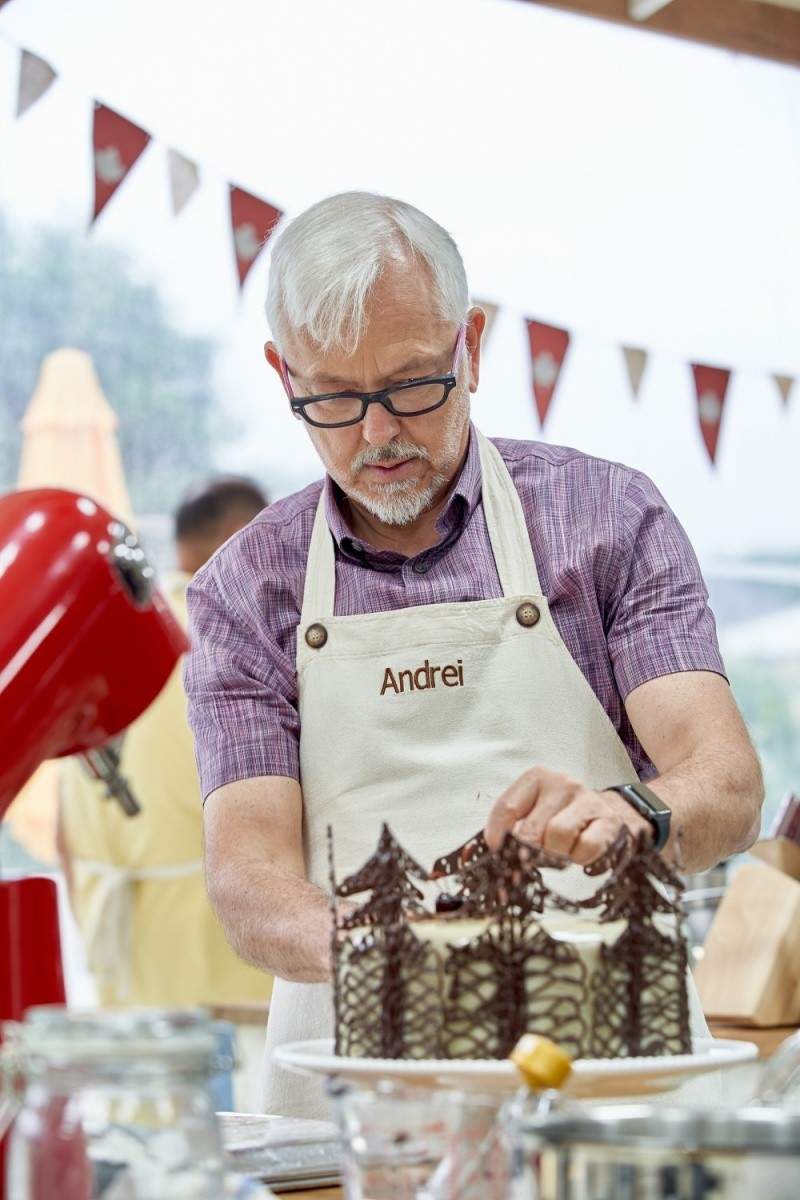 When sliced, Sachin’s cake is one of the most beautiful layer cakes I have ever seen. The layers are exact and intensely-coloured. The judges are wowed by the professional look of the cake.

Megan is also using a mirror glaze but she has totally reimagined a black forest cake as a giant cherry that you cut. Her first cake didn’t rise and so she had to redo it and ice the other cakes while they were still warm, which is usually a disaster; but it worked. She airbrushed her cherry as well. Rochelle is so impressed with her technique that she can’t stop talking about the airbrushing.

Timothy is also going outside the box and instead of making a cake, is making some filled choux pastry under a piece of chocolate lace. The judges agree that his rendition is creative and ambitious, but it didn’t quite work. Rochelle pulls the only choux pastry that isn’t filled with the cherry cream, which his extremely bad luck. That’s not the only issue; the chocolate isn’t tempered properly (no snap!) and they don’t love the presentation. 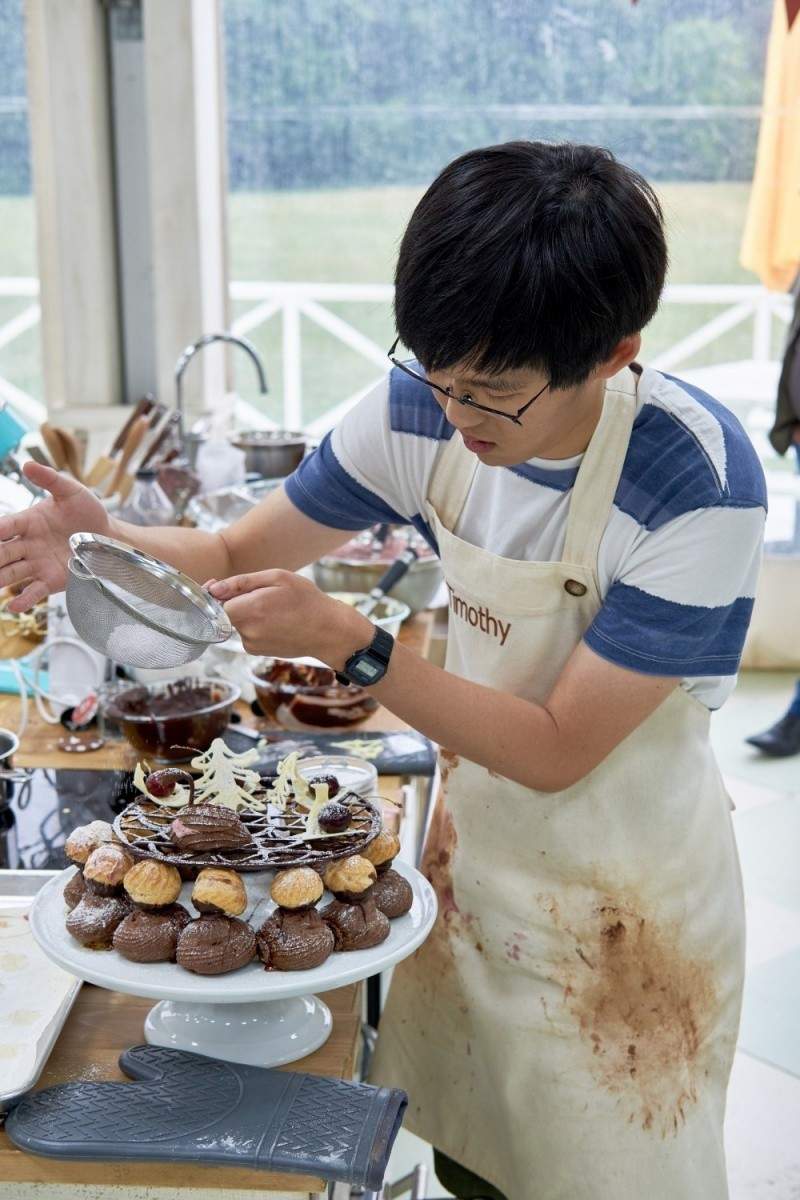 While Timothy has had a good run, his baking is not quite up to the level of the others. And while Mengling looks a little concerned while the judges are talking, it’s not a surprise that Timothy is going home. Good luck Timothy!

Sachin is named star baker this week; he redeems himself with his Showstopper. This is his second time as star baker and a nice bump as we head into the semi-finals next week.

I get a big “I told you so,” as my picks for the top four are the last bakers in the tent. (I can’t wait to lord this over Phil in the More than Maple Syrup podcast.)

As time goes on, it is obvious that Andrei is the best baker. His intellectual approach and technique are ahead of the other bakers. I just hope his creations also taste good.