It’s the semi-finals. It’s sad to think we will only be spending two more hours with this group of bakers of The Great Canadian Baking Show, and of course, our beloved judges and pun-loving co-hosts.

It’s French patisserie week, which is a good challenge for the bakers. What could be more finicky and call for more technique than fussy French baked goods? The only odd thing is that they already made croissants and all-things laminated last week.

Sachin Seth, our resident dentist looks fairly happy that it’s French week, as it plays to his strength of consistency. This is also good for Andrei Godoroja, who has very precise technique. Megan Stasiewich’s knowledge can surprise us, but so can her ignorance, but one of her greatest assets is how she is calm under pressure. Mengling Chen, however, gets nervous and she has only been baking for a few years. We have seen her technique fail her before, but her creations can also be spot-on, and have interesting flavours.

The first challenge is a mille crepe cake. This is a cake built with 25 crepes layers, with flavoured cream between each layer. They are very delicious, and very trendy right now. The bakers cannot use any tricks or dowels to make their cake stand up high.

Crepes are not hard to make (my teenager does it just fine), but they can be fussy. The pan is very important, and it looks like the bakers are all using different pans. Did they bring their own from home? Mengling is not using a crepe pan, so her crepes are uneven, she also doesn’t measure the batter going into the pan. I’m yelling at the TV at this point—measure, Mengling, measure! I am not a rigid baker, but understand the need for a consistent amount of batter.

Mengling then uses a giant round cookie cutter to cut her crepes so they are even, which is one way to do it, but it’s not the right way.  She makes a giant Mont Blanc with chestnut cream. I am all over those flavours, as are the judges, but her technique just failed her on this challenge.

Megan alternates orange crepes with vanilla ones, and decorates her mille crepe cake with sugar creamsicles, whipped cream and bubbles. It is a fun playful presentation for a serious French cake. The judges love it.

Sachin also alternates flavours between raspberry and blackberry cream with pretty flowers on the top. This challenge plays to his strengths, and according to the judges, is bursting berry flavours.

Andrei could probably make crepes in his sleep, and his coffee and maple cake has Bruno speaking his felicitations in French. After the challenge, Andrei says he is walking on air, but says it in his usual deadpan way so it seems sort of funny.

But the funniest moment is from co-host Dan Levy, as usual. He tries one of Megan’s kumquats and looks as if he is about to do a spit-take. Stick to the pastries, Dan!

Remember in the last season when I used to complain that the technical challenges weren’t hard enough? Well, not anymore. The judges call for Joconde cakes, which are small layered cakes with sponge, gelatin, mousse and in intricately-decorated sponge on the outside. They look impossible.

First, the bakers have to make a gelatin from scratch. Megan points out that she has never made a gelée without “le boxe” before. You aren’t the only one Megan.

The decorative paste on the outside looks complicated, but the instructions seem to be good because most of the bakers pull off some form of it. These little cakes need lots of time between steps to set, and it’s a battle for time, as much as baking skill.

Andrei’s sponge takes too long to create, and suddenly, he is running behind. Calm, cool Andrei does look sort of panicked. The most surprised person in the tent is host Julia Chan when one of Andrei’s petite cakes literally falls apart. She screams in shock. It is the first time all season we have seen Andrei with a baking fail. This is also the point in the season of a reality show series when it tends to pull a fast one on us viewers. Could this be the week that the frontrunner goes home?

Mengling is fighting the clock. She doesn’t have time to lift the rings off her cakes and has to place her cakes on the gingham altar wrapped in their stainless steel molds. 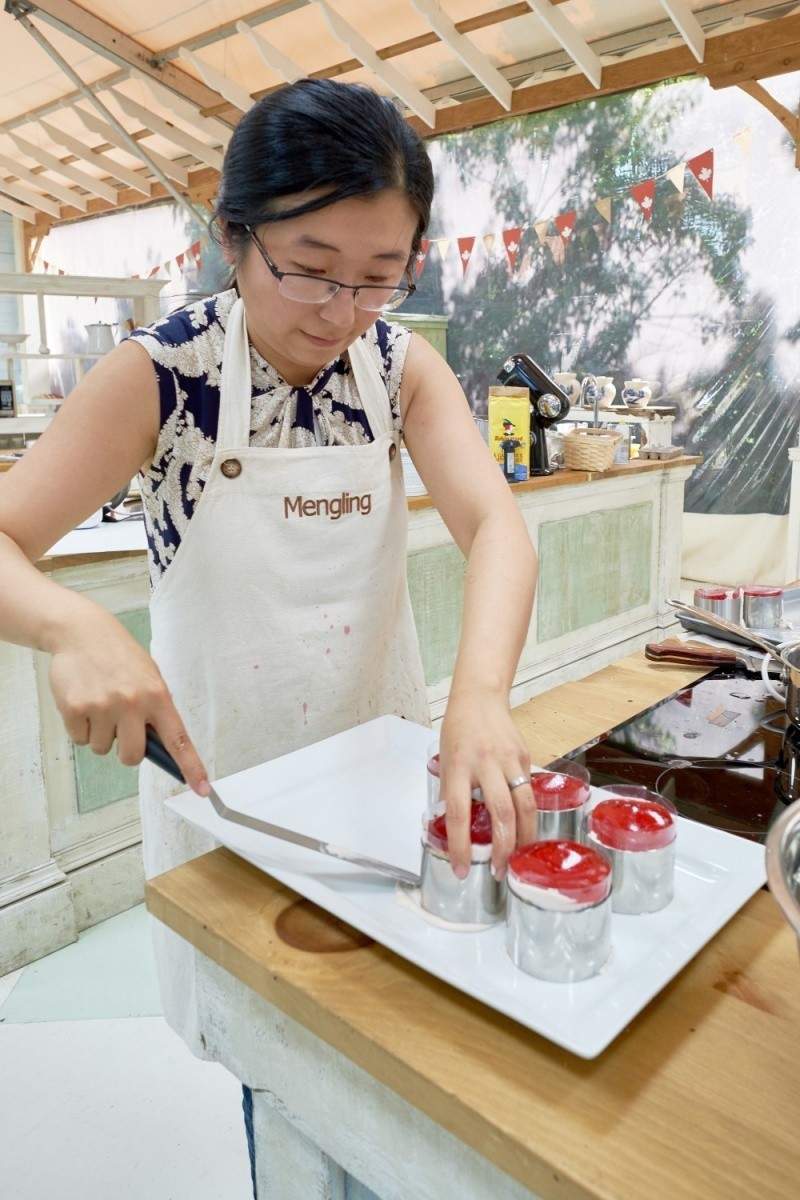 Her cakes can’t be fairly judged since she didn’t finish the task, so she is ranked last. Andrei’s falling-apart cakes are third, and Sachin’s are second. Megan wins another technical challenge, and she is stunned. Mengling says that she is happy because she is just behind Andrei, again acknowledging Andrei’s domination of this competition.

The Showstopper is really three challenges as the bakers have to make three canapes, three tartlets and three finger sandwiches. These tiny hors d’oeuvres trios will determine who is in the finale.

Megan is making a “world of cheese”. Her crostini are made with a bread infused with charcoal, her (overly thick) tart shells are beet-coloured and her vol-au-vent (a stuffed puff pastry tower) has candied bacon. Everything looks beautiful, but even as the judges praise her, Megan isn’t sure. Finally, Bruno makes her eat a vol-au-vent just to prove to herself how good they are. 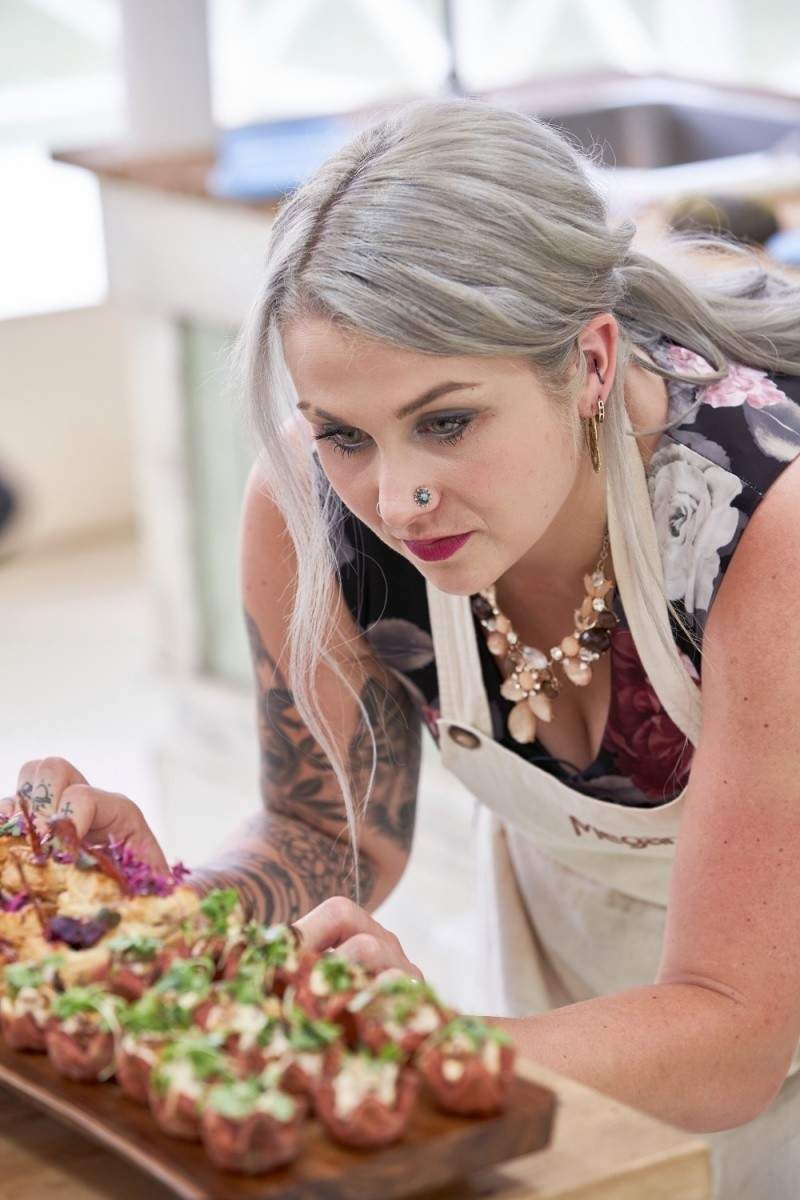 Sachin also makes a vol-au-vent, and his has butter chicken inside. Sachin makes a small sandwich with roasted tomatoes, and a cheese tart. His pate brisee is slightly underbaked but Bruno is in love with his butter chicken appie. 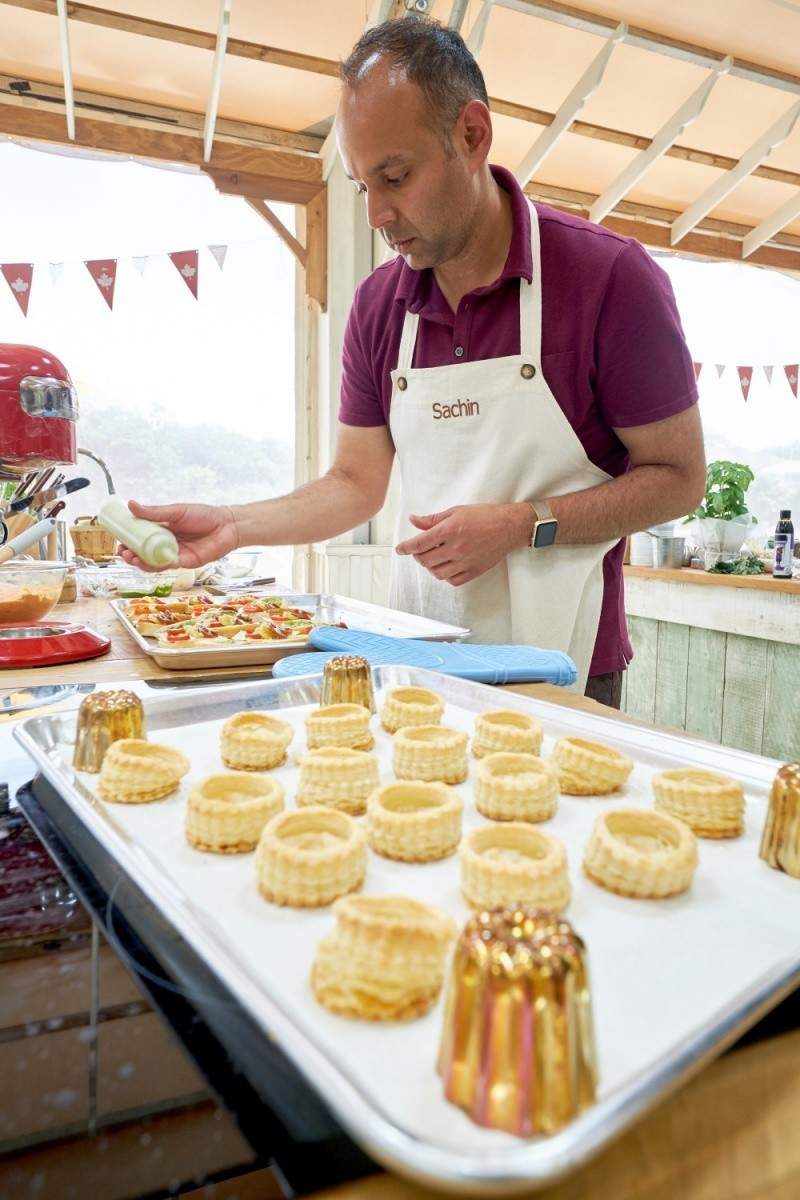 Andrei creates a ploughman’s lunch on a cornmeal toast, a shrimp ceviche in a tart shell, and a beef wellington in a—you guessed it—vol-au-vent. A ploughman’s lunch is cheese with chutney and is a little bit underwhelming for the semi-finals. Once again, Bruno is in love with a vol-au-vent though. 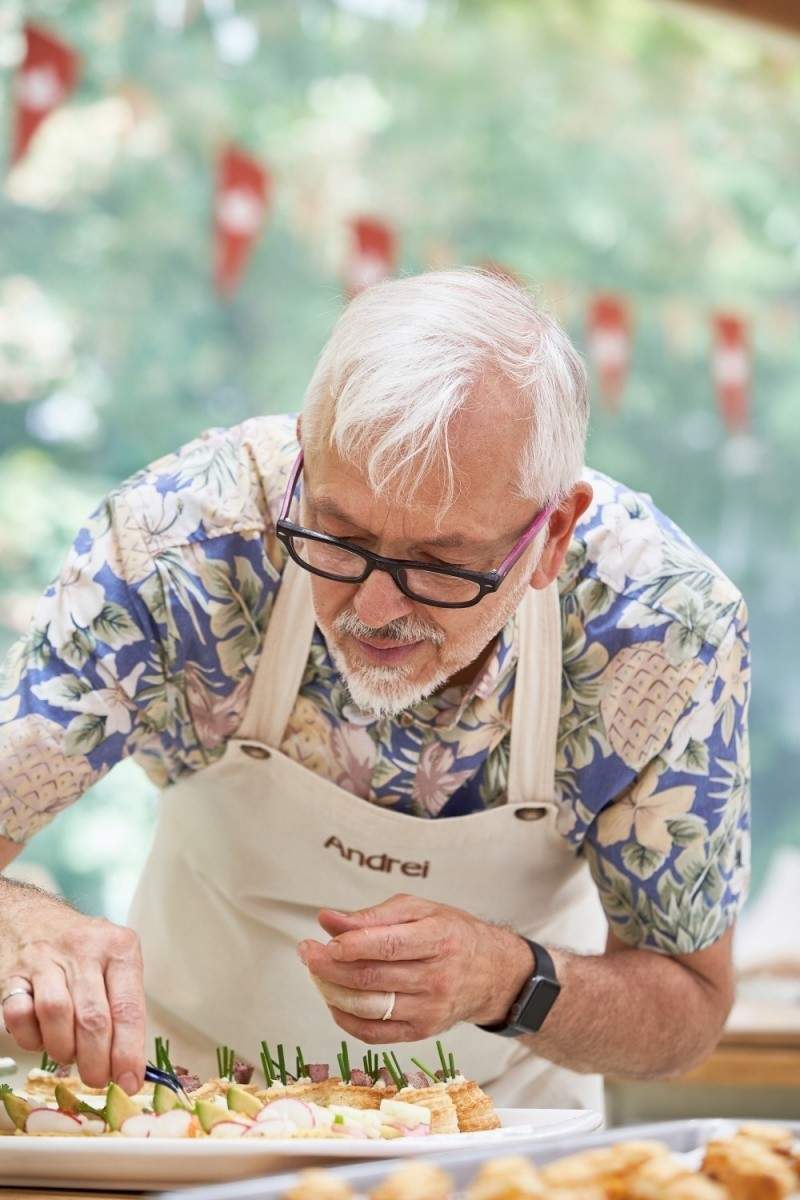 Mengling decides to go a whole different way and makes rice cups for one of her pastries. Taking cold rice and mushing it into a pastry shell does not seem like a good idea for French patisserie week. But you know what is a good idea? Dan and Mengling doing a comedy routine. Dan just loves to go over and ask Mengling questions while she is baking. Her nervous answers are usually so unintentionally deadpan that they are hilarious.

Her rice cups are so hard that Bruno is continuously chewing. But he loves her banh mi on a mini soft bun. The judges like the effort but tell Mengling that at this stage in the competition, everything needs to be exceptional. We know what they are saying; Mengling knows what they are saying too.

And indeed, Mengling is going home.

Star baker is up for grabs, but it is Megan who wins. Megan, who in some ways is the least technical of the top bakers, is Star Baker in the most technical week.

Bring on the finale!

Again, this is my “I told you so” to my podcast co-host Phil Wilson.  Andrei, Sachin and Megan were my top three. In fact, these were the top four that I predicted in the first recap we did.

Someone behind the scenes told me that the summer heat plays a role in an episode. I guess it is in the finale that we’ll see this! Now I’m nervous that something goes wrong for the bakers.

I think these three have been the top bakers all along. Andrei has the edge because of his eye for detail and deep well of knowledge, but it is really anyone’s ugly cake plate to win at this point.