We've all heard what people say about vegan food, right? It's tasteless, boring, rabbit food. Lucky for us, vegan restaurants are popping up all across Canada, each progressively challenging what we thought we knew about vegan cuisine. Nestled in Halifax’s North End, enVie – A Vegan Kitchen has joined the ranks of Toronto’s Live Raw Food Bar, The Coup + Meet in Calgary and Vancouver’s Heirloom Vegetarian to introduce creative vegan cuisine to vegans and meat eaters alike.

Though enVie has enjoyed a steady stream of customers since its opening in summer 2013, it certainly doesn’t hurt that its chef de cuisine, Lauren Marshall, is representing Nova Scotia on the current season of Top Chef Canada. Talk about exposure! While having your own champion of vegan cuisine on a nationwide platform is a big win in itself, owners Diandra Phipps and Cory Urquhart say the community embraced their concept from the beginning.

From the restaurant staple Caesar salad to the more adventurous raw mushroom taco, enVie shatters misconceptions by offering something for everyone. Hell, there’s even vegan poutine.

“The biggest compliment to our food is that we’re breaking that barrier, where you don’t have to be vegan to enjoy it. If it’s flavourful and it tastes good, then why can’t anyone enjoy it?” says Phipps.

From the brunch menu with no eggs to be found anywhere to the popular Seitan Reuben, the menu at enVie is expanding the minds – and palates – of Haligonians. No longer the so-called hippy food of the past, the new vegan approach makes use of a wide variety of ingredients to create truly memorable dishes. Nuts are soaked and magically transformed into a decadent creamy "cheesecake" or a nutty, salty "cheese"; coconut comes to resemble bacon; even mushrooms mimic scallops enVie's mushroom risotto, a technique that brought home the win for Lauren in episode one of Top Chef Canada this season.

While the food is certainly the main character, there’s a lot more that makes enVie a neighbourhood favourite. From the passionate team to the supportive local business community to the comfortable, yet classy modern décor, enVie has made itself a fixture in the city’s dining scene. Then there’s the regularly sold out cooking classes and the "Chefs Go Vegan" nights, where well-known local chefs collaborate on a vegan pop-up to reach a varied clientele. With renovations in the coming weeks to increase capacity and bring more warmth to the space, plus a new spring menu launching shortly after, there’s no slowing down this team. 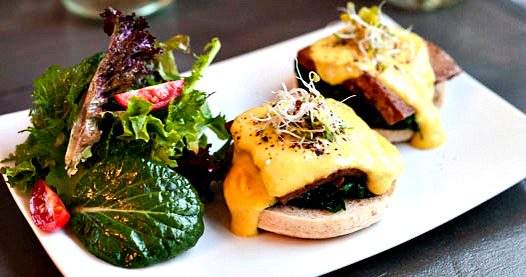