Aimée Wimbush-Bourque is the creator of the blog “Simple Bites” and author of the recently published “Brown Eggs and Jam Jars” cookbook. She speaks to us about the process of transitioning from food blogging to writing her first cookbook, and dishes on life as an urban homesteader and mom. 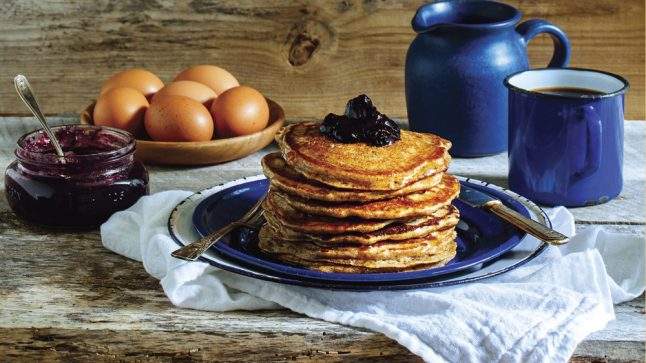 Tell me more about the history of Simple Bites and how you got into blogging.

I always say I got into blogging as a creative outlet. I was transitioning from the professional culinary world, to being a stay at home mom with two small kids. I started blogging as a way to stay involved in the culinary world. I always enjoyed writing a lot and of course I was developing recipes because I cook all the time. Blogging was sort of the platform du jour at the time and it was pretty easy to get started. I guess the biggest surprise is that I really fell in love with the whole community and the concept of creative expression.

What was the transition like from blogger to cookbook writer? Was writing a cookbook always something you wanted to do or did it just happen?

I was infamous for saying I wasn’t going to write a cookbook. But this cookbook in particular was really, really special. I felt like it was writing itself a bit the way the stories wanted to be written. Before I had any interest from Penguin, I was writing an outline for it, preparing stories and recipes. I guess that somewhere along the line, I decided, “Yes, I’m going to do this.” I figured it was going to be the next step.

How would you sum up the book in a couple of sentences?

It follows a year of seasonal eating on our urban homestead, with family at the centre of it all. That’s sort of my one-line synopsis. Seasonal eating, as well as urban homesteading, is a passion of ours, but family food is a mainstay for us. It’s 100 recipes that have a touch of nostalgia but they feature fresh, seasonal ingredients.

What is the story behind the name Brown Eggs and Jam Jars?

Nothing, other than it’s something that I liked. I jotted it down at one point. I really don’t remember when it came to me. It represents both homesteading and the recipes. I totally expected the name to change to something more practical, but was thrilled that they loved the name and wanted to keep it. It captures the book, which is some extra magic I never really anticipated.

How did you get into urban homesteading?

Well quite naturally because I had an upbringing as a homesteader. We lived in the Yukon growing up, off the grid, growing our own food, raising our own chickens. When I moved to Montreal I wanted to be able to teach these things to my kids.

What is your favourite recipe in the book? Do you have a favourite?

I don’t. I’m very intimate with all of them. The blueberry cardamom butter on top of the pancakes on the front cover is one of my go-tos though. It’s in the crockpot so it is super easy, but it never fails to impress. Its simplicity makes it the perfect way to get into making preserves.

What was the most challenging part of putting the book together?

The discipline of writing became the most tedious. The lead-ins and stories came fairly easily but I took writing out the recipes very seriously. I’m a huge cookbook fan and geek, really. Especially having previous experience developing recipes for my blog, I wanted to make sure they all worked.

Did most of the recipes come easily or were there lots of testing to be done? What was the one recipe that took the longest to perfect?

Everything was tested. I had professional and home cooks testing them. One of the recipes I handed over to the professional testers was the cinnamon shortbread bar with chocolate ganache. I wanted to try and replicate chocolate dipped shortbread, one of my favourite holiday cookies, in a simpler, bar form. I ended up making that one about eight times. Overall, it was more the baking rather than the cooking that was harder to get right.

With so many cookbooks on the market nowadays, what sets yours apart?

What’s different and what sets it apart is that the only way to write a cookbook is to share your story and your take. Really, this book is so closely related and follows our family food life. So many people have told me that it feels like a Canadian cookbook, featuring ingredients from Quebec orchards, tapping maple trees, that sort of thing. I think that the recipes themselves are unique because they represent three specific backgrounds; my homestead upbringing, professional kitchen work, and work as a mom.

Food blogging seems to be on the decline as of late. Is this something you have noticed and where do you see yourself heading?

I think it’s headed in two directions. There are people who are going to choose a more commercialized blog with lots of content, a very business oriented approach. Then, there are those who do slow blogging, doing it for our own creative expression.

Would you like to do another cookbook and if so, what would it be on?

I am now in the process of shaping one right now; putting pen to paper and looking at what will be. I’ve signed with Penguin again and am excited to work on this next project. At this point we are looking at a Spring 2017 release, so stay tuned!

Do you have any advice for someone who wants to transition from food blogging to writing a cookbook?

Start writing, get into practice. And don’t publish your best recipes online. Also, if you think you have a great idea, narrow the focus. Describe it in one paragraph, then one sentence, and eventually see if you can sum it up into a single title.

Lauren Toyota on her career path, creative vegan cooking and why everyone should be 'hot for food'