Looking back, it feels as though we spent most of 2020 eating our feelings in Winnipeg. I suppose that’s one silver lining in what has been a tumultuous year full of uncertainty and frustration.

These have been very trying times for the hospitality industry, but if restaurateurs and chefs are anything, they are creative and resilient. With that in mind, here's a Coles Notes on the ups and downs that Winnipeg's food and drink scene has experienced throughout the past twelve months. 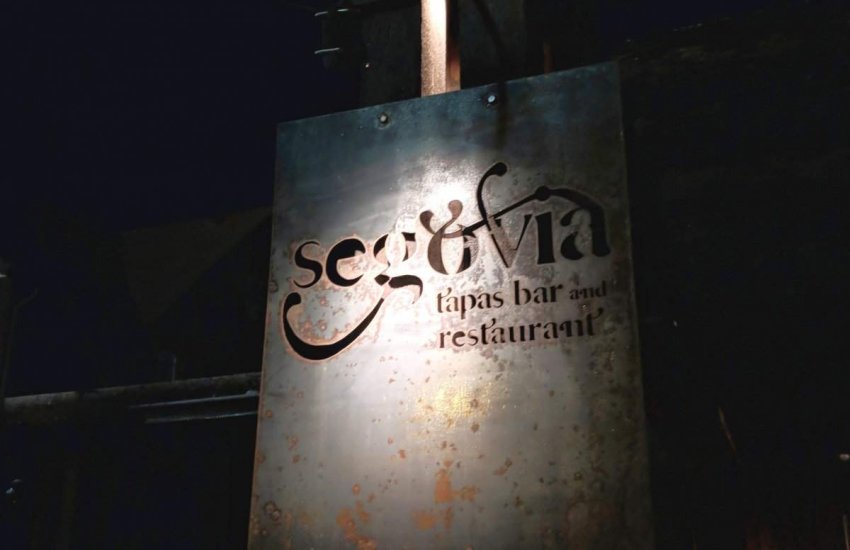 Segovia had consistently been our most-celebrated eatery since opening back in 2009. When co-owners Carolina Konrad and chef Adam Donnelly announced that the restaurant would not be reopening following the initial lockdown phase it was like losing a loved one. That place just had it all–incredible food, the friendliest and most charming front-of-house staff–and a vibe that always saw it ranked as one of Canada’s best restaurants.

Had we known the first few months of 2020 would be the last time we would get to eat croquettes while drinking lime sorbet-studded gin and tonics at Segovia we would have paid the restaurant many more visits before the spring. Luckily, you can still experience Konrad's amazing front-of-house charm by way of her restaurant Clementine–which she co-owns with sister Raya Konrad and chef Chris Gama–and Donnelly has been busy growing his sourdough company, Midsommerbread.

It goes without saying that this year has been beyond challenging for restaurants. If we knew the pandemic would return with a vengeance in the fall, we also would have spent more time out on the town.

We miss the eclectic basement setting of Sous Sol and the fun atmosphere at deer + almond–where chef du cuisine Emily Butcher had just returned from winning bronze at the Canadian Culinary Championships, the highest placement of a Winnipeg chef since Makoto Ono won it all in 2007. 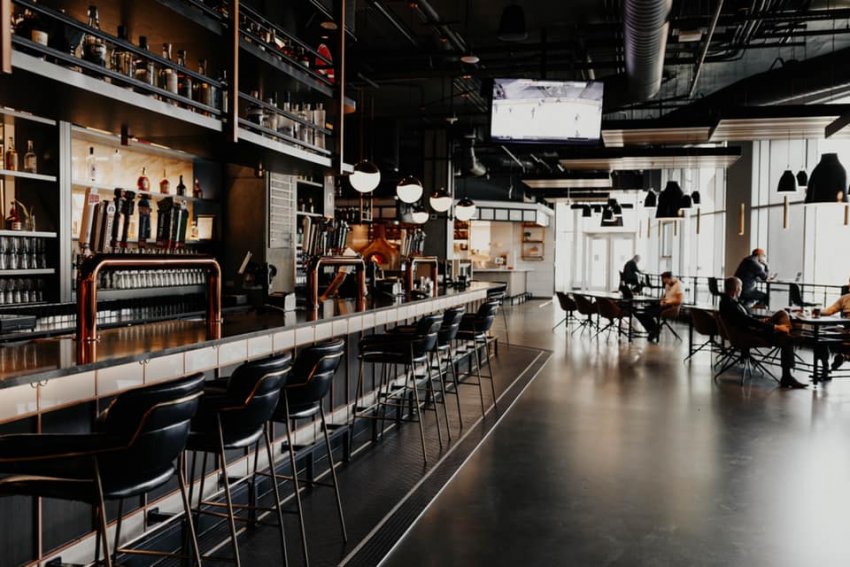 We would have spent even more time in the newly opened and glorious Hargrave St. Market, walked both Ellice and Sargent Avenue in the West End, where our (nationally) unsung hole-in-the-wall spots such as Sargent Taco, Thanh Huong, Pho Hoang–the neighbourhood has so many great Vietnamese spots–and Harman’s Cafe were always waiting.

Thankfully, outside of Segovia, the above places are all still open and providing excellent takeout while many of the city’s biggest restaurants and top chefs have been going above and beyond in serving customers, frontline workers and those in need.

Giving back during difficult times

On that note of answering the call, we’ll always tip our hat to chef Ben Kramer for being a fantastic culinary ambassador for the city. During the first lockdown Kramer, chef Harold Mitchell and the rest of their crew started Made With Love, which uses unused or near-expired ingredients to battle food insecurity in the city through the Main Street Project. The initiative is still going strong and they have now made over 20,000 meals for those in need since launching in the spring.

That’s just one example of restaurants helping out, as we’ve seen countless cases since March. Special mention to places like Trans Canada Brewery, which delivered hundreds of pizzas to local shelters and also recently caused a traffic jam when they gave out 25,000 cans of beer to healthcare workers. As well, the two locally owned Fionn MacCool’s franchises have helped supply 20,000 meals for local shelters through 1JustCity along with over 5,000 meals for healthcare workers. 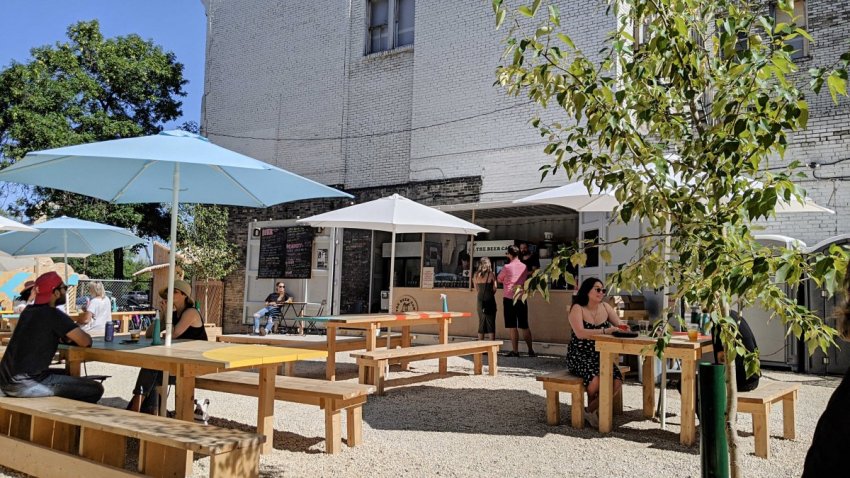 The Beer Can on Main Street was one of a handful of outdoor bars that popped up in 2020.

In the summer, COVID numbers were almost non-existent in the city and things felt somewhat "normal". During this time, a number of new concepts were warmly welcomed with their creative use of shipping containers and cool outdoor spaces.

In the handsome Exchange District, a pop-up bar called the Bijou Patio became the go-to spot for lunch for all of us downtown office workers. Housed in a shipping container, the bar slung beers from Nonsuch Brewery and Little Brown Jug, while its picnic tables offered up QR code menus that brought up all of the options in the area for takeout or delivery.

Speaking from personal experience, you could have yourself a refreshing sour from Nonsuch paired with Clementine’s (ridiculously good) burger and find yourself unashamedly dancing in your seat.

A few blocks over on Main Street we had The Beer Can, which also used a shipping container as a bar to serve local brews. The outdoor concept had a rotating roster of food trucks and nightly live music too, which helped make it one of the most popular spots in Winnipeg to spend a summer night.

It was nice to see Assiniboine Park also get in on the pop-up bar action with Cargo Bar, another converted container concept that specialized in craft cocktails. This beauty even had a rooftop patio and a space that was second to none, with plenty of trees for shade beside the Riley Family Duck Pond. 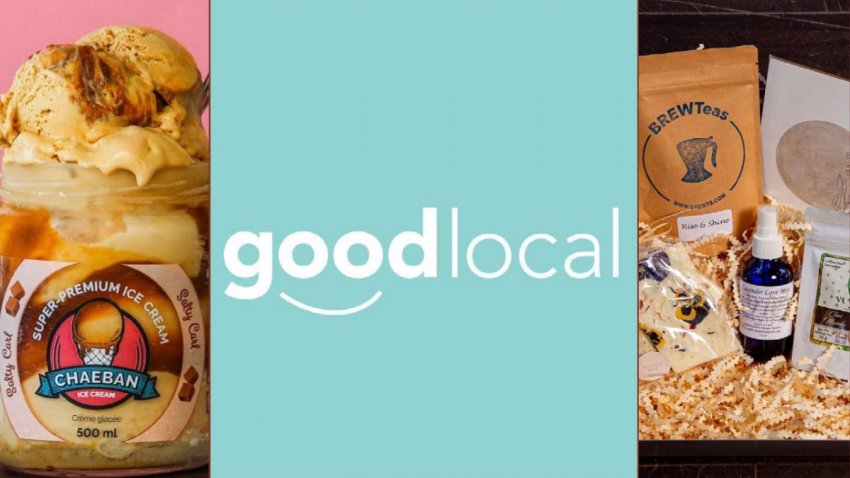 On the shop and buy local scene, late 2020 also saw the creation of GoodLocal by former CFL player-turned-entrepreneur Obby Khan (who owns the Shawarma Khan and Green Carrot Juice Company chains). GoodLocal works like a Winnipeg-centric version of Amazon, offering a wide range of products from local makers and shops. Snacks, sauces, meal kits, breads, meats and let’s not forget about Chaeban Ice Cream, which is sublime.

GoodLocal has seen immense success since launching and even had to pause orders for a short while so it could catch up on deliveries. 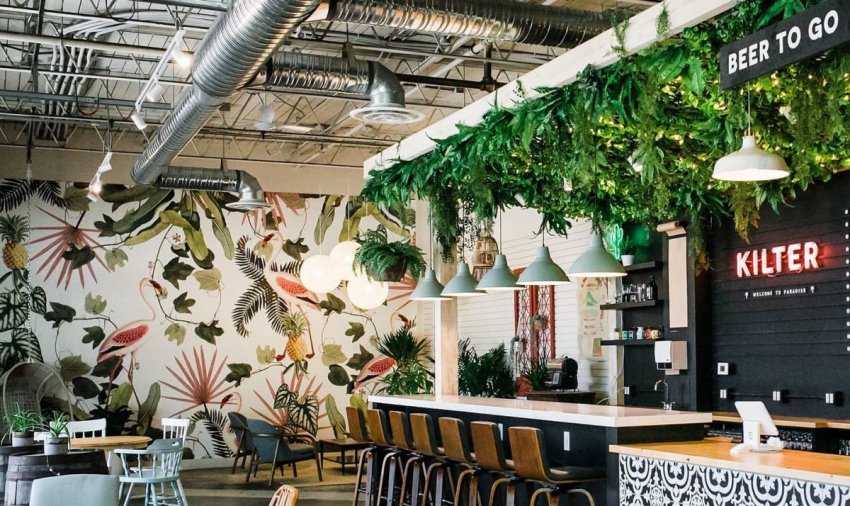 In spite of the seemingly never-ending challenges brought on by the pandemic, Winnipeg had a number of impressive new spots open up.

On the brewery front, Kilter Brewing Co. finally scored their own room, opening a peach of a space in St. Boniface that compliments its roster of hop-forward beers that have become wildly popular with locals.

Juneberry has continued to impress with a lovely patio overlooking the Red River and a vibrant brunch-focused menu courtesy of the NuBurger crew and Clementine alumni. Also brand new for brunch is downtown’s Modern Electric Lunch, a place that blew me away with the caliber of the savoury waffle with smoked gouda sauce, a Reuben that should be a case study on corned beef, and a spin on birthday cake (raspberry, plum, jalapeño and honey cake with lime and blueberries) that I would push aside a kid for like Will Ferrell in Old School...and I don’t even like cake.

It was also great to see chef Tristian Foucalt (formerly of Peasant Cookery) open up a nice eatery called Preservation Hall with his wife Melanie in the Polo Park area that is focused on French cuisine with local ingredients. Foodtrip Kitchen–where you can order from several Filipino food vendors and catering companies all under one roof–and Next Stop Café, a brand new spot representing the flavours of Karaj, Iran (get the pistachio milkshake) also impress.

Another highlight has been the Syrian eatery, Daanook Restaurant, whose Syrian owners have been working through terrible tragedy to bring more Middle Eastern flavours to The Exchange District. Last but not least, Noor Mahal is an upscale North Indian joint that has been a welcome addition to Fort Rouge.

I also have to give a shout out to Kosmos Space Cowboy Cantina. There’s ghost kitchens and then there’s ghost kitchens like this that celebrate your highest food cravings. This guilty pleasure menu is brought to by chef Stefan Lytwyn and his cousin Nyk Bielak who would normally be playing Elder Cunningham in The Book of Mormon across the globe. Talk about multi-talented!

Winnipeg chefs get the star treatment 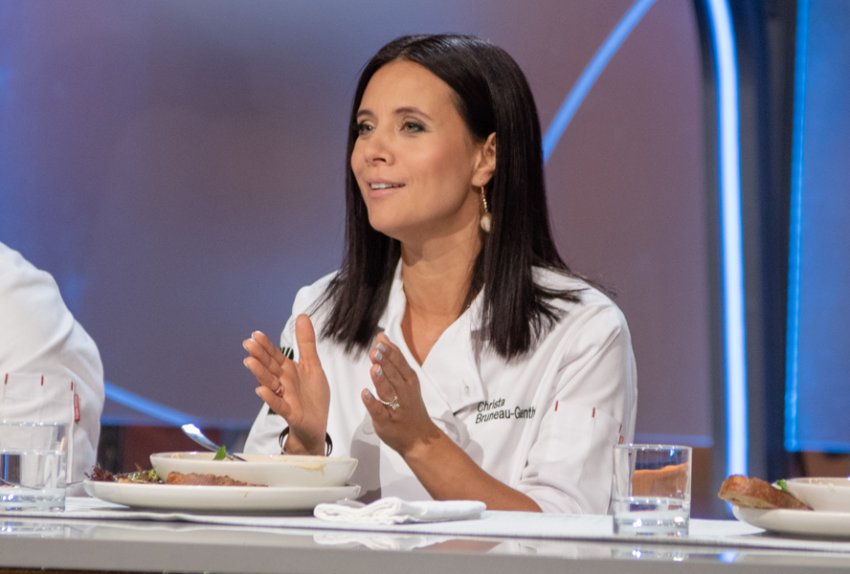 Speaking of stars, two of the city’s most charismatic chefs are finally getting time to shine on Food Network Canada’s popular competition series Wall of Chefs as part of its judging panel.

Both chef Mandel Hitzer of deer + almond and Christa Bruneau-Guenther of Feast Café Bistro–our city's famed spot for Indigenous-focused cuisine (she is also a member of the Peguis First Nation and an outstanding community advocate)–have brought plenty of zest and charm to the panel, including a shout-out from Hitzer to our beloved honey dill sauce.

To close, it was great to see chef Scott Bagshaw finally get the recognition he deserves on the most recent Canada’s 100 list for his celebrated restaurant Enoteca. So many of the best meals I’ve had in Winnipeg have been at one of his restaurants.

Just this week we had takeout from Enoteca for the fifth time since the start of summer and, even in a takeout container,  the chef’s flavours still sing. The beef tartare with Iberico "XO", pho aioli, quail egg and foie gras is true perfection. You can’t help but close your eyes when eating it.