You’d be hard-pressed to find anyone in Edmonton, maybe even in Alberta, who is not familiar with Duchess Bake Shop. In fact, the French-style bakery’s reputation is heralded nationwide, thanks to love from adoring fans as well as a front-and-centre 2012 special story to the National Post by Noah Richler who stated, “Edmonton may just be home to the best patisserie in Canada”.

Lucky are those who live nearby, for they can stop by the elegant bakery and have a warm brioche Pépin or a buttery croissant or a heavenly macaron (or five) whenever they choose. For those who can’t, well, c’est le vie—that’s life, or so it was up until last month when the Bake Shop trio of Giselle Courteau, Garner Beggs and Jake Pelletier released the Duchess Bake Shop Cookbook. Now everyone can have access to Duchess’ treats, 24/7. 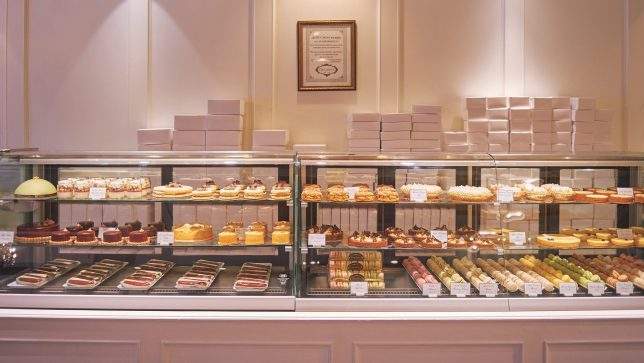 It took nine months of late nights, long days and hard labour to bring the book to the shelf—the irony not lost on master baker and recipe creator, Giselle Courteau, who gave birth just three weeks before the book went to print.

The recipes range from the easy pate a choux to the very involved, flawlessly-domed, mint-hued signature cake, The Duchess. Fans of the Bake Shop will be happy to see the recipe for Duchess’ macaron: the almond meringue cookie that started it all.

The cookbook, a reflection of 19th century linen-covered books of yore, contains 208 pages of recipes, photos, tips and tricks, and the Duchess story. The book, like everything the bakery offers, is a work of art. Courteau, who considers herself “not very talented”, feels that if people use it only as a coffee table book to admire the pictures, it’ll give the public an idea of whom they are. This woman, who tried 200 times to perfect the macaron before she was happy with the result, is completely without airs and refreshingly modest, and lucky for us, happy to share her recipes. 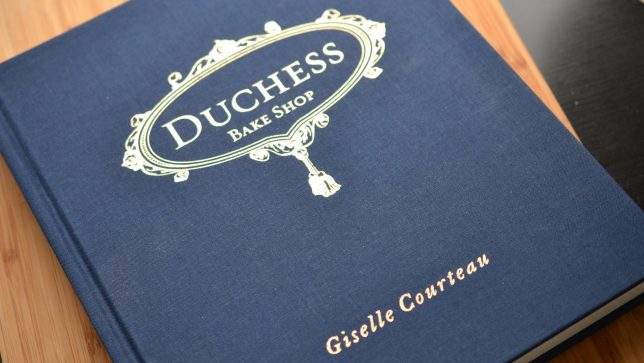 The pictures, without a doubt, entice a person to bake. In fact, flipping through the pages makes me want to don a frilly apron, turn up Édith Piaf and throw flour in the air.

The thought of taking on a French pastry recipe could be intimidating to some, but Courteau reassures me every recipe was written for the home baker. Each recipe you see in the book was tested in the home of Giselle Courteau and Jake Pelletier. They wanted to be confident that the recipes worked outside of a professional bakery.

Pelletier, a professionally trained baker who trained at Heston Blumenthal’s Fat Duck in England and at Pierre Gagnaire’s Sketch in London, is the finisher. Where Giselle calls herself more of a rustic baker, the perfection, the shapes, the finesse, the beauty: that’s all Jake.

The trio of Pelletier, Courteau and Beggs work seamlessly together. Each has his/her role; each has his/her strength. It is a recipe that works. While Courteau wrote, Jake baked, and Beggs made sure the shop carried on with business as usual. 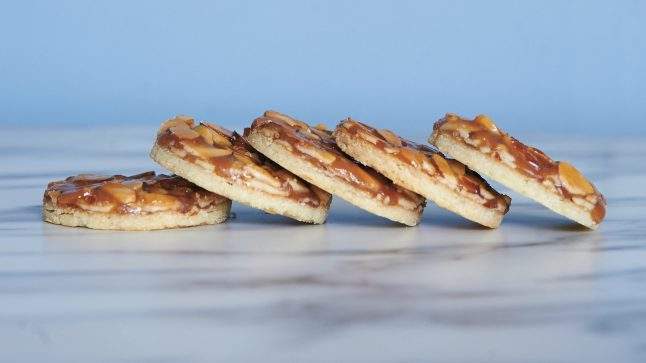 The book was self-published in Edmonton and although Courteau says she couldn’t have predicted the success of the shop, she was confident in their choice to print 5,000 copies of the book, against their publisher’s advice. Five thousand is the magic number needed to make the Canadian Best Seller’s list. One month into sales and the book has already sold over 3,000 copies.

They are humble perfectionists; appreciative of the support they’ve received from the community, and thankful for the staff, who, each day, commit to producing extraordinary product.  Giselle says she and her partners are lucky. It’s 9:15 a.m.; the bakery has been open for 15 minutes and the lineup is already 20-people deep. Another tray of still-warm brioche is put onto the shelf. I think we are the lucky ones.