As the tidal wave trend that is plant-based proteins continues to gain more and more traction across Canada and beyond, the handful of clever Canadians that were ahead of the curve are now happily saying "told ya so". Halifax chef–and Top Chef Canada alum–Lauren Marshall is one of those individuals.

Since opening in spring 2018, her vegan butcher shop/deli Real Fake Meats has become one of the most popular vegan eateries and vegan meat producers in Atlantic Canada. Marshall is known well for her wide array of housemade plant-based meats like veggie turkey, ground round, chorizo-inspired sausages, and signature veggie donair meat that Haligonians can't seem to get enough of. 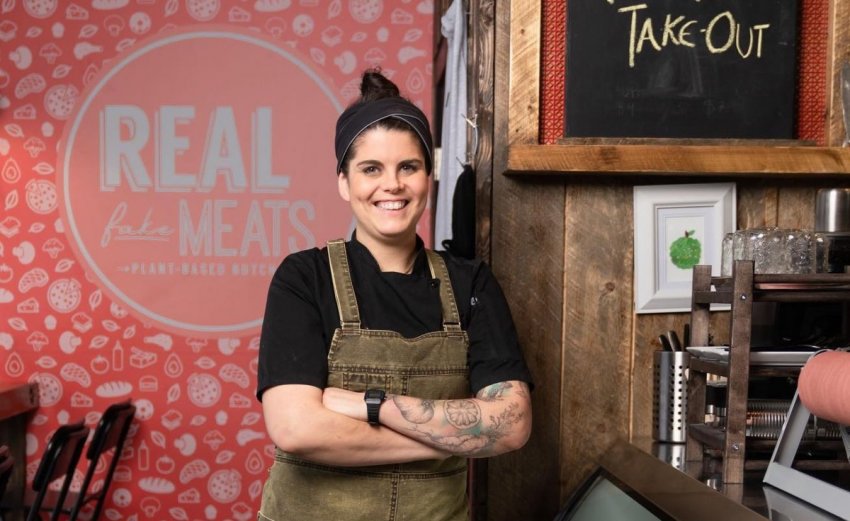 “Being a vegan meat company, you’re going to get backlash, so the name Real Fake Meats just makes it more fun for us. We’re having fun and making good food that just happens to be vegan," says Marshall.

The chef explains that Real Fake Meats' playful name was hard to come by at first. Her and her friend Brandon Levesque had been recipe testing a variety of plant-based meats for some time, all the while struggling to find that perfect name. Then one night, inspiration struck a la late night cartoons.

“We were watching a lot of Rick and Morty at the same time we were getting things ready to launch. One episode had a company called Real Fake Doors and our minds immediately went to 'Real Fake Meats'," says the chef. "We both said, 'Holy shit, that's it', so we owe our name to Rick and Morty!"

Before the late night discovery, she says they were keen on "The BeLeafers", but now laughs at the thought of it. That name certainly doesn't have the same jovial ring to it, does it?

The Real Fake Meats deli is open from Wednesdays to Sundays and online orders for (local) delivery and pickup can be made through their website.