While we're only two weeks into Top Chef Canada Season X, I am thoroughly enjoying the added pressure the "x" component has added to the competition.

While the 10 remaining chefs sit in the waiting room before this week's Quickfire Challenge begins, with Chris Irving wearing the brightest t-shirt I have ever seen in Top Chef Canada history, you can see many of their lockers adorned with magnetic exes. A reminder that some of them will soon be put into a sudden death cook-off to fight to remain in the competition.

"Not too stoked looking over my shoulder," says Toronto chef Joachim ("Jo") Hayward.

Chefs like Kim Conway of Charlottetown and Jo are already marked with two, and being only one episode in, that must be weighing heavy on them. 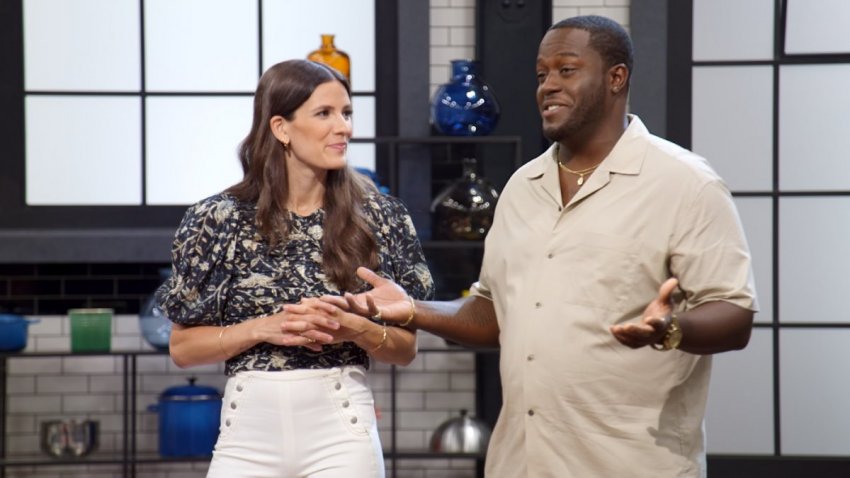 As much of this milestone season is taking inspiraiton from seasons gone by, host Eden Grinshpan informs the competitors that this week's Quickfire would be a mish-mash of three former TCC challenges.

A vending machine, a table of unmarked canned foods and blindfolds will all be in play in a relay race for the chefs, who are split up into teams of three. Top Chef Canada Season 8 fan favourite Adrian Forte is the guest judge for this challenge and as the winner of the Episode 1, Tre gets to watch from the sidelines.

This is something that rarely happens on Top Chef Canada, but it's also a signal to both the competitors and the viewers that not only is immunity not up for grabs, but there's probably no Quickfire prize for the winning team either.

Chefs in rounds two and three of the relay race must wear their blindfolds as the first chef begins. The 10-minute round one timer begins and Tawnya, Joachim and Monika all must pick an ingredient from the vending machine. They all choose to blitz their chosen item (potato chips, pretzels and wasabi peas respectively) into a crumb before utilizing it in other applications.

"We're team one and we're gonna hold that one," says Tawnya confidently in her diary session. 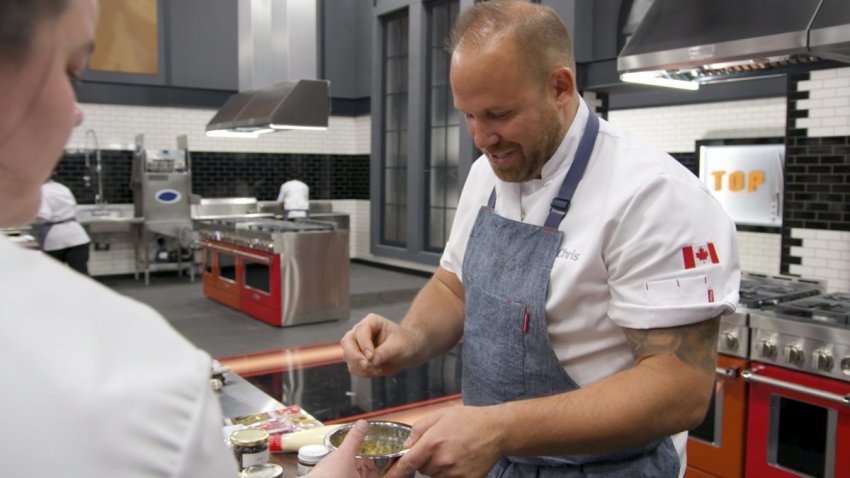 The first round chefs have it easy as the next set must opt for two unmarked cans, open them, hope for the best and incorporate their contents into their team's dish in some shape or form. Vish (who's paired with Tawnya and Martine) hopes for anything, but fish and ends up with preserved mackerel in one can and cream of mushroom soup in the other. Kim seems displeased after opening one of her cans by what she describes as "chicken meatballs and gravy". The grey and beiche

Chris appears to have it even worse than the other two with "mystery pork" and canned carrots and peas. As unappealing as meat in a can can be, I feel like the distinct flavour and mushy texture that is typical of canned vegetables is much harder to work with in this challenge. 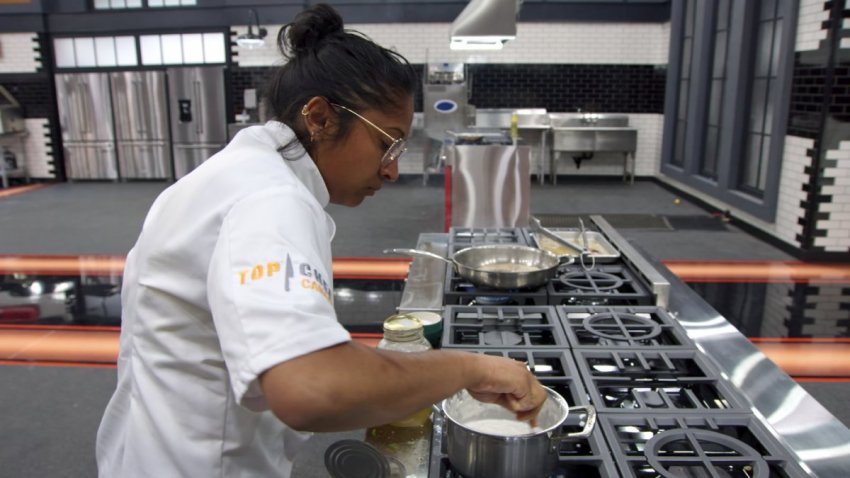 Once we reach the third round, Martine is presented with components in play, but a still unused can of soup. To her, it's an unfamiliar canned good, but she still makes the most of it to create a sauce for her team's potato-crusted trout dish. It winds up looking quite striking.

Camilo has finally noticed the prepped schnitzel that Jo wrapped in round one, but Kim did not notice, and starts to fry it for service. His team's dish turns out fairly well, but not as composed as Martine's final product.

Poor Dez is seemingly trying to salvage the actions of her teammates (Monika and Chris) and winds up with a bizarre-looking salad that one could only describe as a distant mountain-dwelling cousin of a niçoise. Run for the hills!

Not surprisingly, it is Vish, Tawnya and Martine that clinch this win while Dez, Chris and Monika wind up in the bottom and each earn an "x". It is now just Tre, Vish, Camilo without the dreaded marking beside their names. 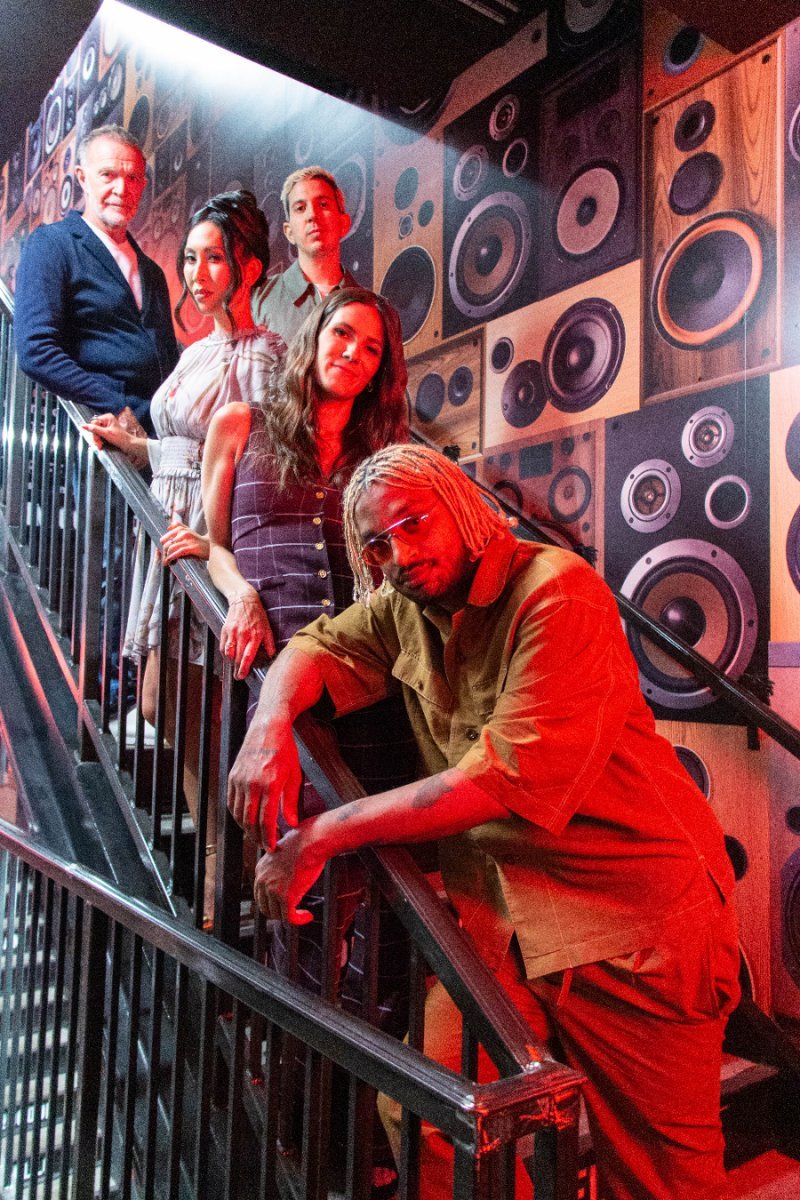 "Music and food go together like Justin Bieber and Georgia peaches. In the kitchen, chefs are total rockstars," says Eden.

If you know me, you'll know that I love an event that merges the worlds of food and music. This week, that is exactly what happens during the Elimination Challenge.

Via random draw, the chefs are paired up at five themed food stations backstage at Toronto's iconic venue El Mocambo where they are tasked to serve tasty easy-to-eat fare to the acclaimed band The Beaches (and the judging panel, of course). Guest judge—and TCC Season 3 finalist—Danny Smiles joins Mark McEwan, Mijune Pak and David Zilber and is touted by Eden as an expert when it comes to catering backstage for notable musical acts.

Jo and Tre are assigned to salads, Chris and Kim to sandwiches, Tawyna and Martine to noodles, Monika and Dez to "raw bar" (meat), and Camilo and Vish to desserts. Everyone feels fairly comfortable in their theme aside from Tawnya and Martine. Both raise concerns that noodles aren't an item that work with often, if ever, and appear worried about making a quality end product.

Tawnya appears to be on the right track while staying true to her Indigenous culiary focus by infusing sweet potato noodles with Navajo tea. The birria-style approach to the other aspect of her dish raisies my eyebrows though. Martine is opting for soba noodles, which can be easy to work with in cold applicaitons, but she's hoping to serve them warm with a rich jura wine sauce.

I'm not sure how either of these dishes are going to play out.

Kim finds herself in equal hot water when she discovers her preserved lobster meat is not up to par for her lobster rolls and needs to make a last minute swap to fried oyster po' boys. She's also making buns from scratch "for the first time", which is usually a kiss of death in the TCC Kitchen. 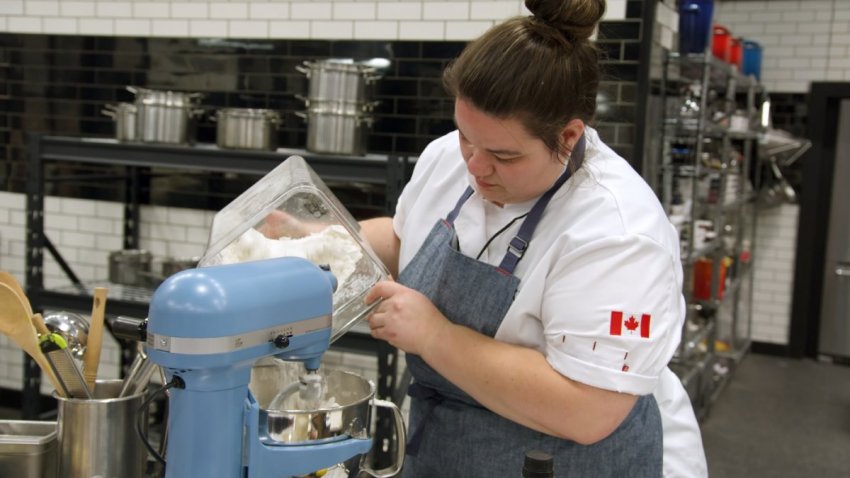 I'm worried for her.

The Beaches are the first to move through the chefs' stations and provide feedback. Glowing reviews all 'round, so the chefs are riding high before the judging panel rolls in.

Kim's oyster bunwich seems to be nearly inedible due to large, dense buns and dry oysters, while the judges can't get enoough of her sandwich station counterpart Chris's Yukon-inspired flatbread sandwich.

Mixed feedback rolls in for other competitors. Dez has created a carpaccio that leaves some judges wanting more as does Monika's poached prawn and clementine dish.

"It flutters in the higher octaves of my palate," says Zilber after trying Monika's prawn dish. Come through with the musical analogies!

The "Noodle Nook" fares poorly, as expected (perhaps even by the chefs themselves), so it's looking like Tawnya and Martine will wind up in the bottom this week. 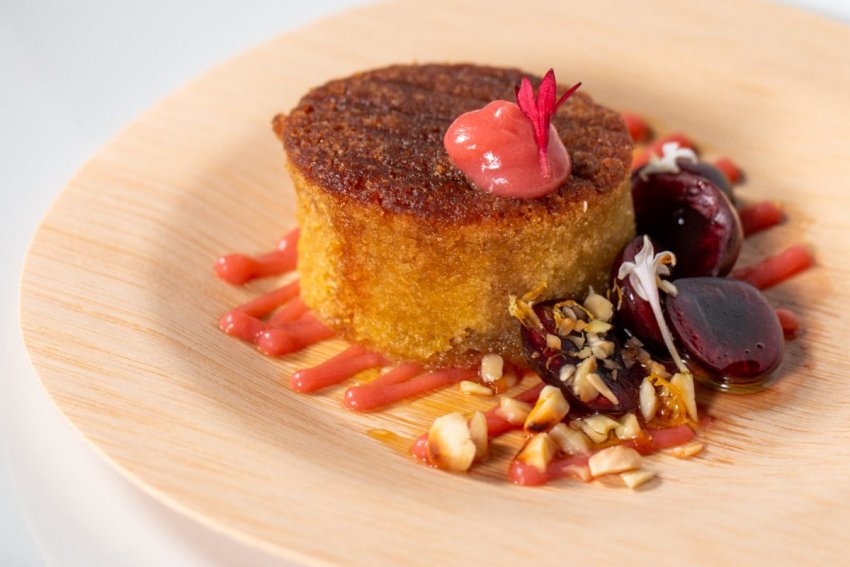 The standout station of the night seems to be the desserts as Vish impressed with an olive oil cake accented by rhubarb compote and berries while Camilo really hits a homerun with his blackened lemon curd. As referenced during the show, it's a curd technique that Zilber made famous and he seems especially impressed by Camilo using it in a dessert tonight.

Once it's all said and done, The Beaches take the stage. Both the judges and cheftestants get a chance to soak up the live tunes and Mijune dancing like she hasn't been to a concert in years. Girl is havin' a time! 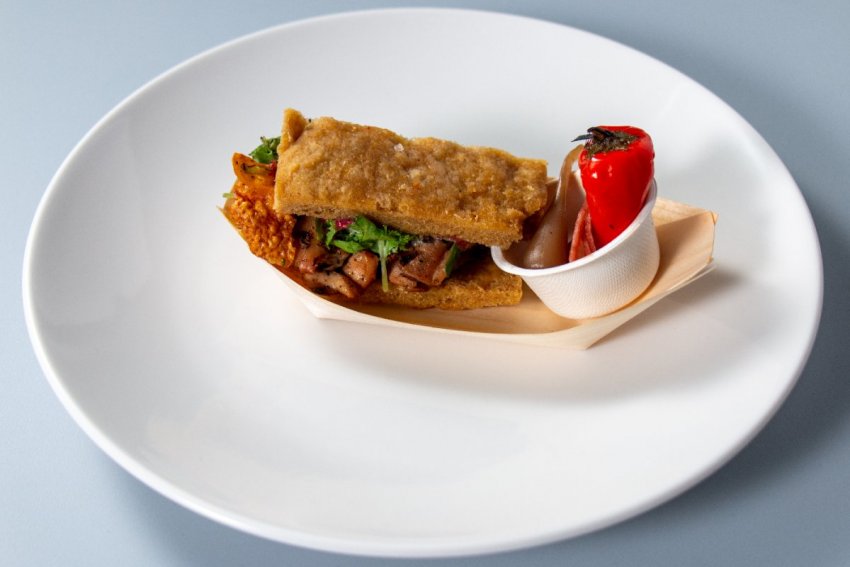 While Jo seemed to wow with his corn salad, it is Camilio, Vish and Chris that wind up in the Top 3 after the backstage party wraps. The compliments seen fairly equal across the board, but in the end, it is Chris that takes home the win for his creative use of Yukon ingredients in his sandwich (pictured above).

With a lot of mediocre commentary for this episode's Elimination Challenge, it was hard to correctly pin point which two chefs would be joining Kim in the Bottom 3. It winds up being Martine and Tawnya, but a gut instinct tells me that it is Kim they'll be sending home.

The judging panels comments reaffirm this as they note Martine's technical abilities and Tawnya's entralling approach to cooking. Kim's fate is sealed and she's told to leave to TCC Kitchen. 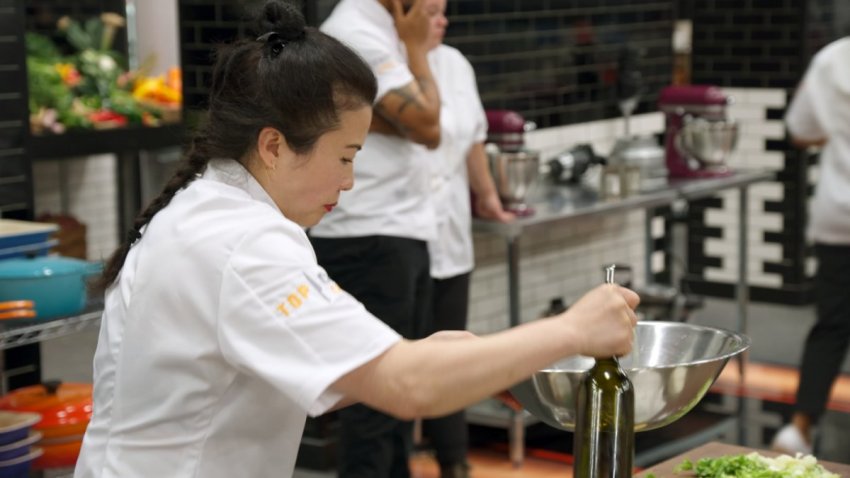 I love an East Coast chef moment, I really do, but Kim has felt outmatched by her competitors since the premiere's Quickfire. Having botched seafood dishes two episodes in a row is worysome, pressure of the culinary competition series aside.

Sure, chefs like Dez and Martine did not have a great showing in this Elimination Challenge, but you can see a clear foundation of technical skill. I'm hoping to see them gain some traction with next week's Restaurant Wars episode.

I haven't stopped thinking about Camilo's blackened lemon curd since watching tonight's episode, so I just may have to try to make a batch myself!

Check out our Episode 2 power rankings! 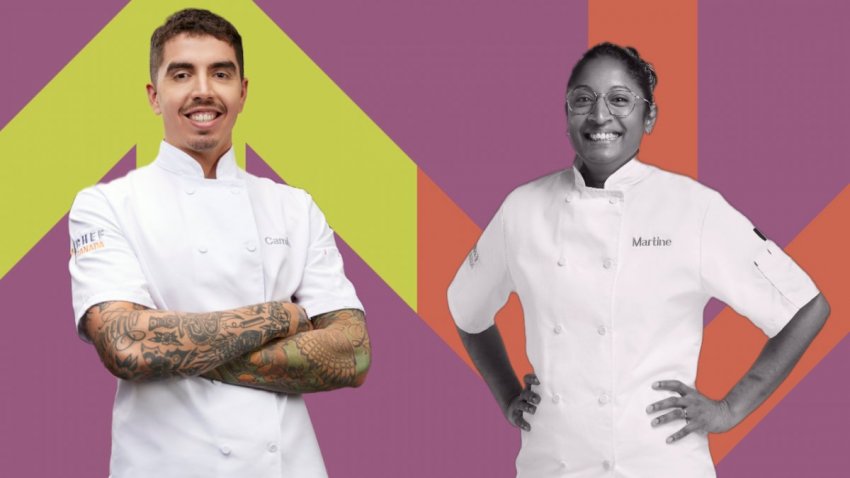