It’s bread week on The Great Canadian Baking Show and there is nothing better than a fresh loaf of bread still warm from the oven. Bread is my ultimate vice, so I was excited to see what the remaining nine bakers would be conjuring up throughout the episode.

There are three things I personally look for in a great loaf of bread...

With that, let the bread making begin! 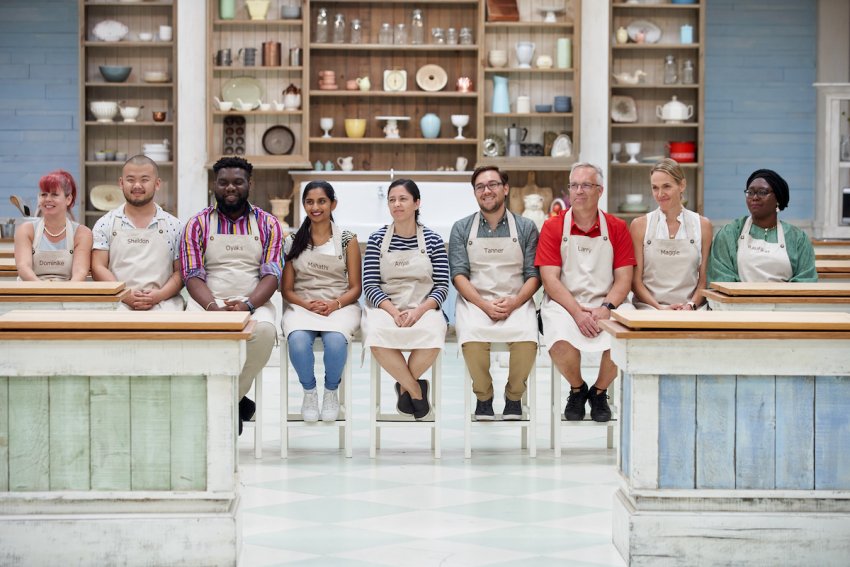 This week’s Signature Bake is all about Tarte Tropézienne; a rich cream-filled brioche bread sandwich created in the 1950s. It is really more of a cake than a tart or bread, but delicious-looking nonetheless.

She was filming on location in St. Tropez around the same time that the pastry chef who invented this dessert opened up his bakery. Brigitte fell in love with the dessert after having it at the bakery, gave it its name and they both fell madly in love and lived happily ever after.

Brigitte and the dessert, not the baker and Brigitte.

The bakers have two and a half hours to bring their creations to life, which makes sense as their dough needs time to rise. 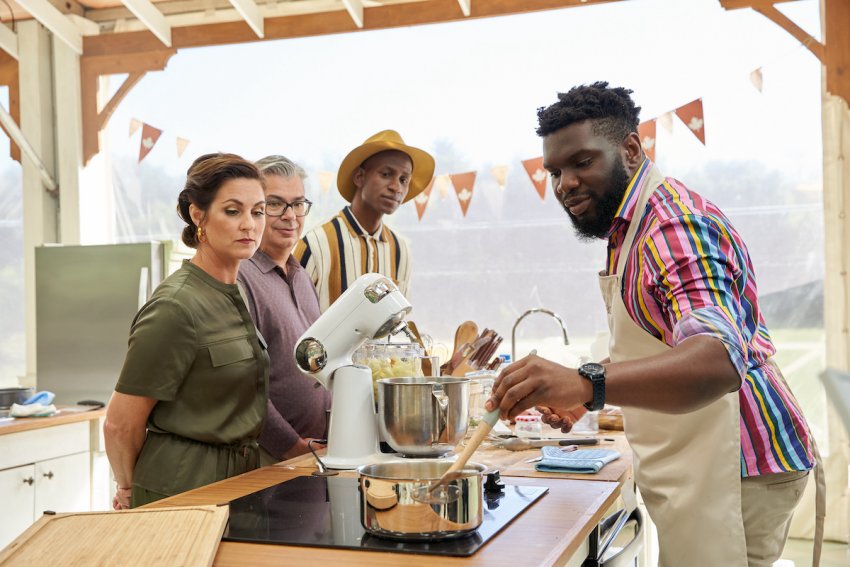 Right off the bat, I notice that Oyaks has made a bad move. He has scooped flour directly from the flour bag with the measuring cup which is a big no-no in baking. This method packs way too much flour into the cup. What he should have done is used a spoon to scoop flour from the flour bag into the measuring cup, which will get you pretty close to the actual weight needed.

At this point, I would be surprised if his bread didn’t turn out dry.

Dominike is pretty confident with this challenge since she is French and so is this particular dessert. She opts to make a glaze with orange liquor. When judge Bruno Feldeisen asked if she was worried if her glaze might soak into the cake, she basically cut him off immediately to say no. 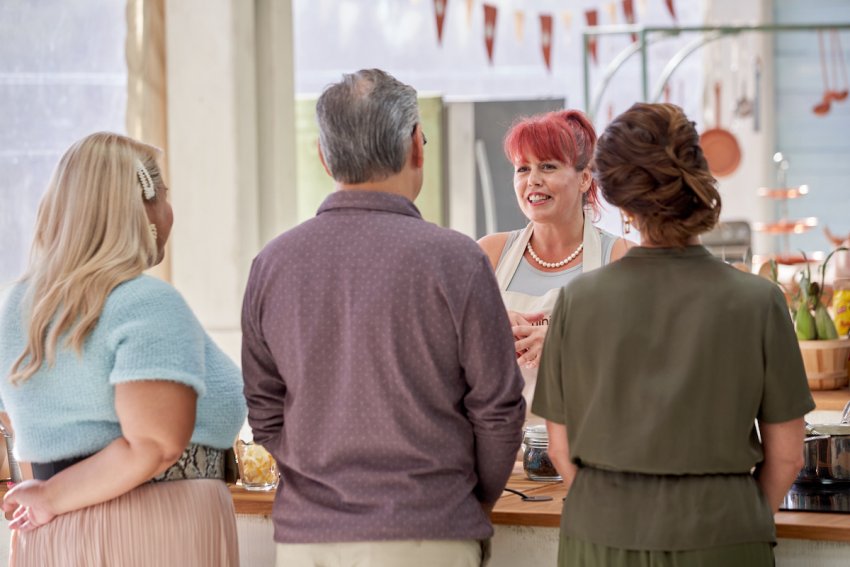 Even the judges were taken back by her fast, self-assured response.

I applaud Sheldon for continuing to incorporate Asian techniques and flavours into his creations. He made a Tangzhong bread, which is a method of cooking a portion of the flour with water before adding in the rest of the ingredients. This technique keeps the bread super fluffy and tender and generally yields a higher rise as well.

Unfortunately, judge Kyla Kennaley was incorrect when she said this was a Japanese technique. Tangzhong is a Chinese word and this is a Chinese cooking method. The Japanese have a similar technique called Yudane. That said, both methods have the same end result.

(Fun fact about me: your girl speaks broken Mandarin thanks to working overseas for several years.) 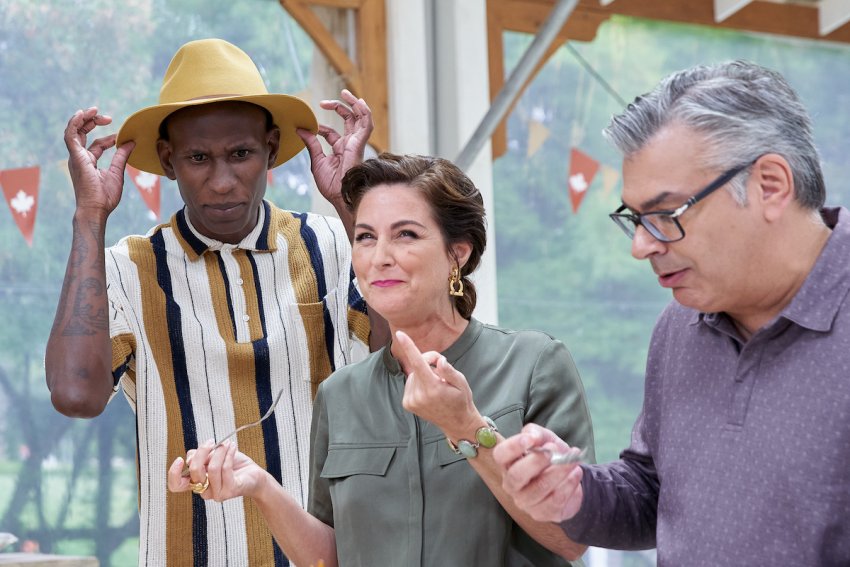 Although no one was named the winner of this challenge, the judges’ faces said it all after eating Sheldon’s Tangzhong brioche with a blueberry compote. 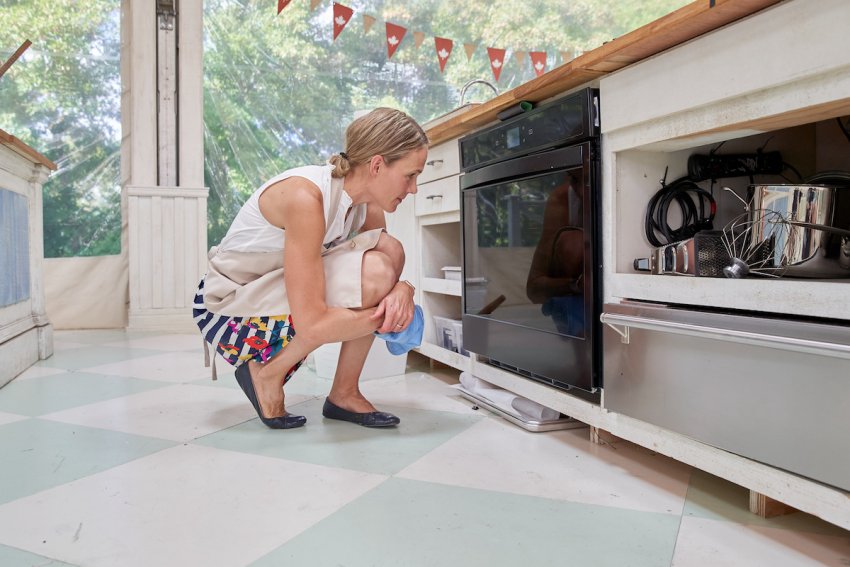 One dozen, perfectly-shaped pretzels, with a double twist and a zesty cheese spread or dip on the side . This might describe a tasty snack at your neighbourhood pub, but  this is also our Technical Bake for the week. Seemingly simple, it is actually a lot to ask of our bakers within the two and a half hour time limit.

Sheldon and Maggie’s faces reveal immediate panic. I feel like there were more, but the camera people decided that honing in on two panicked faces are enough to convey the intensity of the challenge.

The bakers were given the same complete recipe to follow, so that’s good. No one seemed to be adding their own flare to this challenge. It was all about following the recipe and praying it worked out.

Almost every baker appeared to struggle with during this Technical Bake proving that pretzels can very finicky. If you knead the dough too much you end up with a tough pretzel. Not kneaded enough and you get pretzels lacking in elasticity.

Raufikat said something that was basically like a punch in the gut, “I don’t like cheese, I’ve never tasted cheese.”

I don’t trust people who don’t like cheese. The overwhelming judgement on my face as she said this was very real. 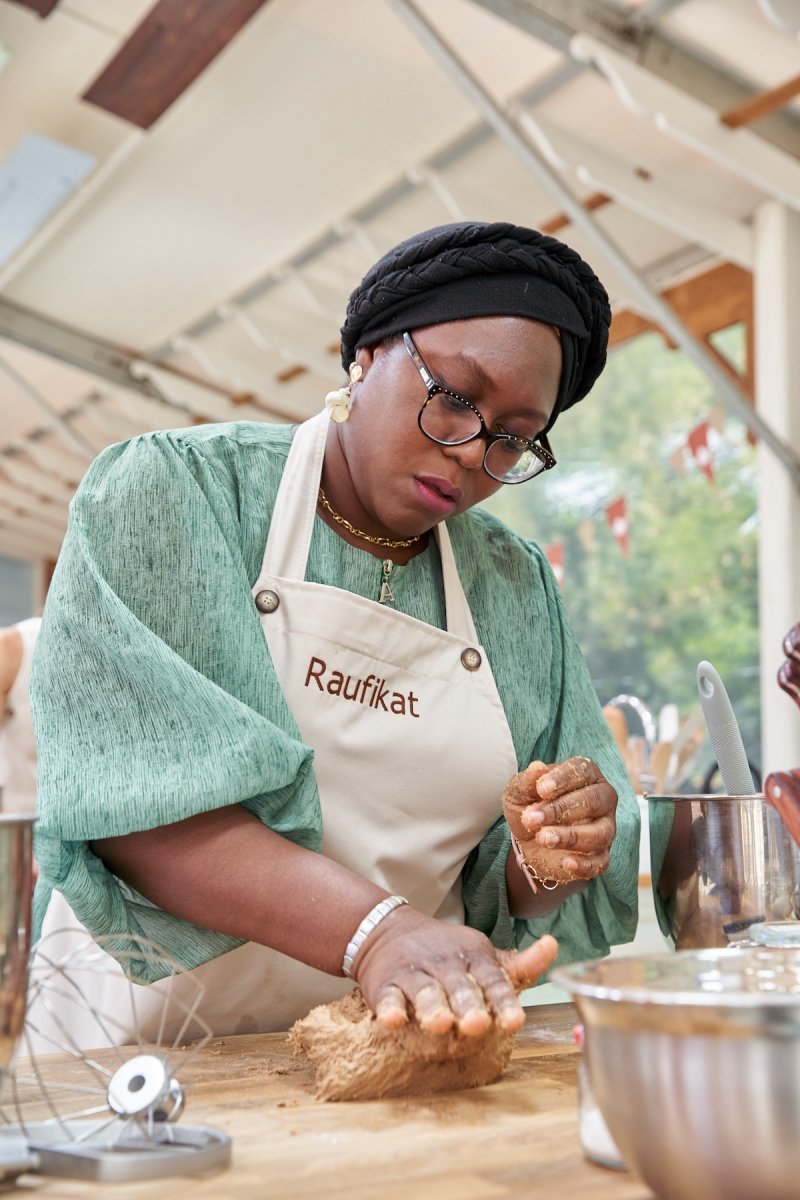 The end product pretzels of this challenge ran the gamut from poorly executed to near-perfection. Raufikat’s pretzels proved especially worrysome, having lumps and uneven shapes. This put her in the bottom spot. Perhaps this was fast-acting karma for what she said earlier about my one true love, cheese?

Larry’s pretzels bounced back when touched, a great sign and exactly what the judges said they were looking for. His melt-in-your-mouth pretzel won him the technical challenge.

I love that this recipe was clearly enough to make exactly one dozen pretzels, yet somehow Dominike ended up with just 11. One must have ran away. 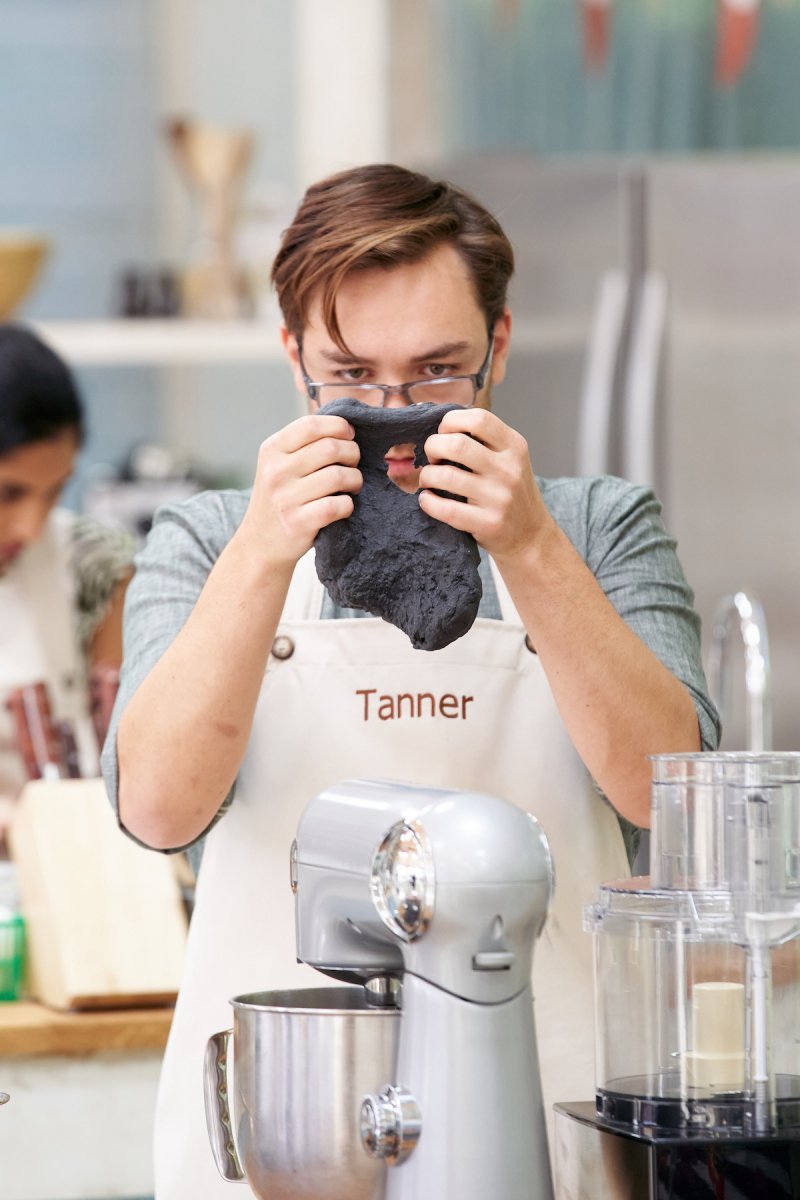 For the final challenge of the week, our bakers are asked to make a two-tier, stuffed bread centerpiece with two different kinds of bread that must have a 360 degree display. Pressure, much?

Tanner goes out of the box with a challah infused with activated charcoal, then filled with chorizo and manchego and a red pepper butter, which sounds delicious. I knew the Prairie boy had some tricks up his sleeve.

Real talk: Tanner’s raw logs of charcoal bread were very reminiscent of poop logs. Come on, I know you thought that too. Thankfully, that image quickly dissipated once the bread was braided together beautifully. Visually, Tanner’s bread was stunning when it came out of the oven.

Other interesting flavour combos for this challenge included Dominike’s bacon and whisky filling in her chocolate and pistachio babka. Maggie also made a chocolate babka, so this felt like a sub-competition here in the GCBS tent. My boy Sheldon made a Chinese BBQ pork bun-inspired brioche and I was drooling while looking at the end product. 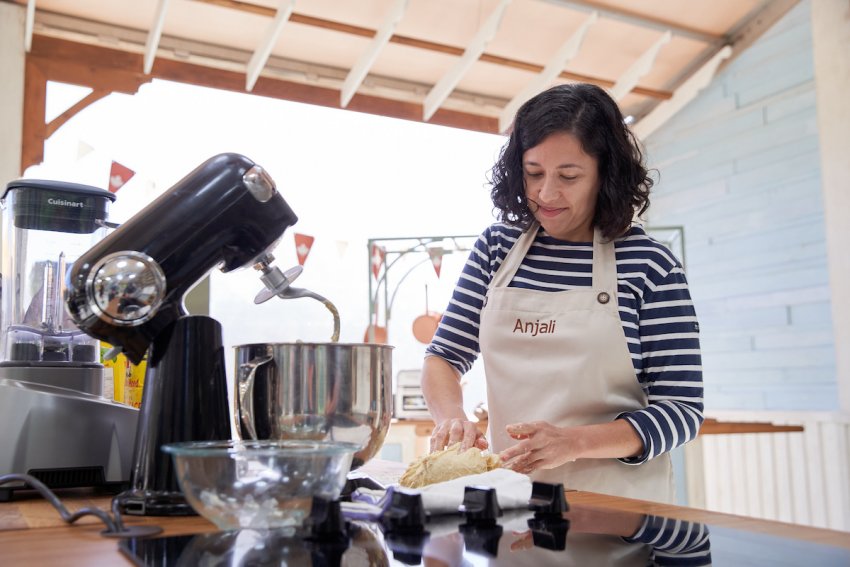 Anjali made a basil pastry cream for her bread centrepiece which sounded delicious on paper, but the judges took away points for its colour because it looked unappetizing. I wish she had added some fresh strawberries, as strawberries and basil are a classic combination, with the added bonus of a great colour contrast.

In the end, Anjali’s unfortunate Showstopper visuals prove to be her downfall. She seemed to have played it a bit too safe while most of her fellow bakers set the bar high. 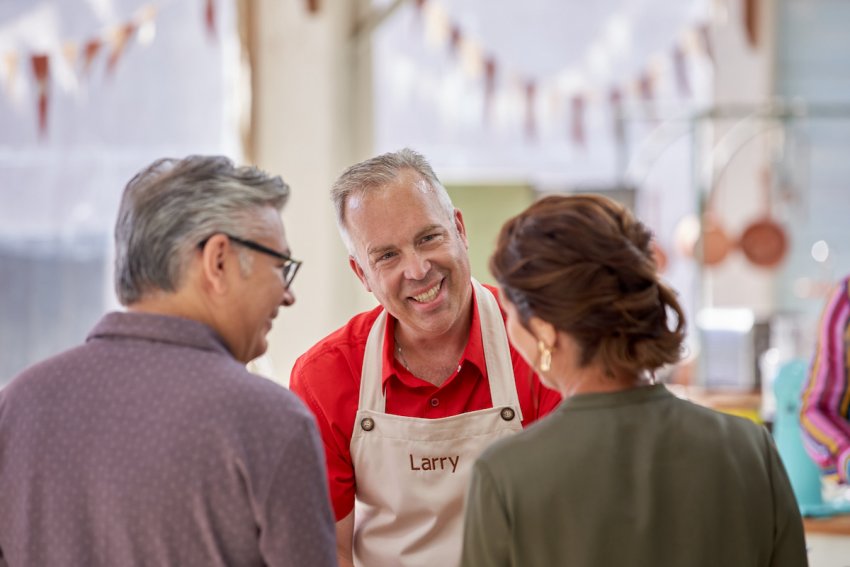 Our beloved Larry wins Star Baker for this week and I’m sure you saw it coming a mile away, as did I.

He killed all three of the bread making challenges, but especially the final challenge. This guy made his own cheese, his own breadboard, and a perfectly cooked, showstopping (if you will) two-tiered bread masterpiece. 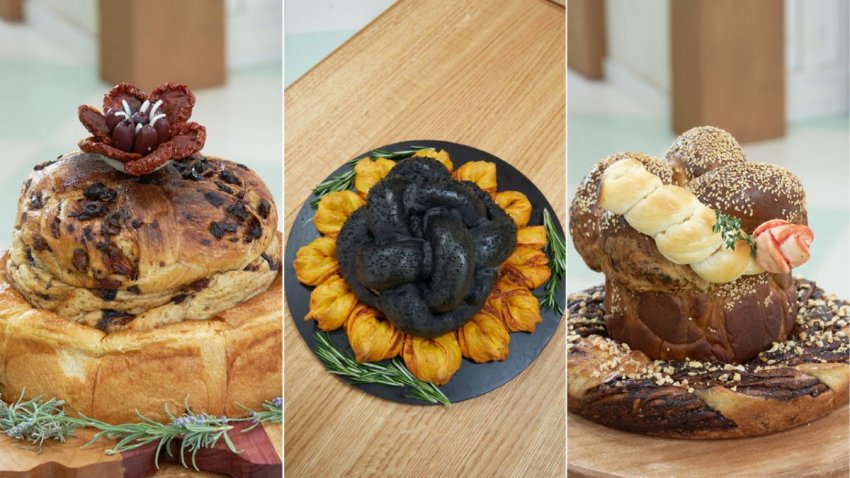 Maggie made a “chai tea” pastry cream for the signature bake. As a Sikh person, it drives me nuts when people say "chai tea". Chai is the Hindi word for tea, so the translation of “chai tea” is “tea tea”.

Who started this trend in the first place? I wouldn’t be surprised Goop had something to do with it. They certainly capitalized on making turmeric lattes a thing.

I hope that Sheldon continues to fusion bake and teach us about new flavour combinations that we, the viewers, might not have thought to put together. I also hope Tanner continues to create things that look unappealing when raw, but exquisite when cooked to keep us guessing.